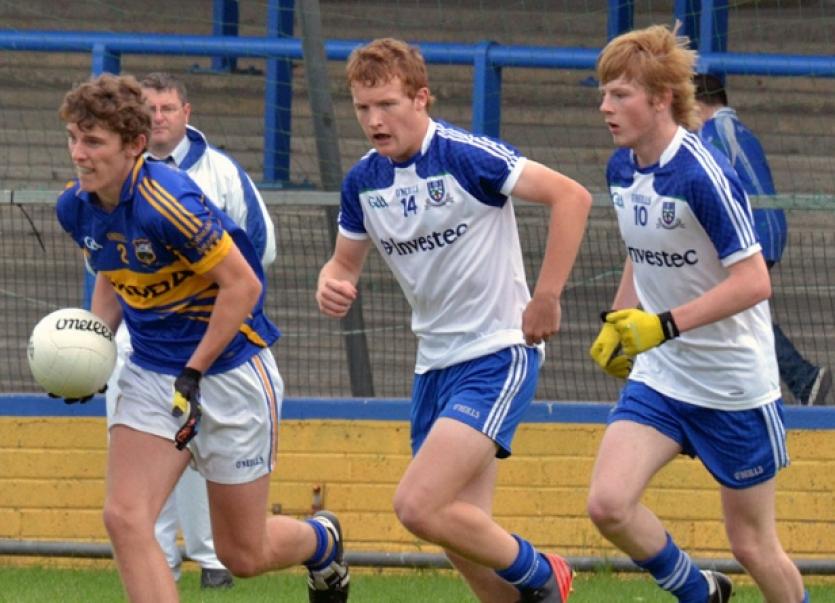 Two minutes into injury time Monaghan led 0-10 to 0-8 when Charlie McGeever’s men surged forward in search of a grandstand finalé. The ball was worked into the hands of Stephen Quirke who created room for a shot which was blocked. Gerry Cronin gathered the rebound only to see his effort at a three-pointer blocked before Quirke grabbed the ball once more. The Moyle Rovers man went for goal and this time the crossbar denied Quirke and Monaghan cleared their lines.

Monaghan, who were well worth their three-point win, managed to hold off Tipperary during a frantic final few minutes, but the Premier were left cursing their luck following Stephen Quirke’s misfortune and the failure of Charlie McGeever’s men to take full advantage of a strong breeze in the opening half. Indeed, Tipperary only led by one (0-5 to 0-4) at the break.

That said there are very real reasons for Tipperary to feel proud of these players. Not once did their heads drop or appetite for the contest dwindle. Indeed, corner-back Willie Connors illustrated all that was good about this Tipperary team. The Kildangan man shipped a bloody knock to the head in the 48th minute and returned three minutes into injury time to man his station in determined fashion.

Alan Tynan kicked the Premier into the lead with an early free.

Tipperary, however, stretched their lead to two in the sixth minute when Josh Keane picked out Paul Shanahan and Shanahan booted over a great point.

Within seconds Conor McCarthy opened Monaghan’s account, but Tipperary responded with a point from Alan Tynan after a smartly-taken ’45 by Josh Keane. Then, in the 10th minute, Liam Casey added to the Tipperary tally (0-4 to 0-1) following a surging dash forward.

Monaghan responded with points from Ferghal McMahon and Michael O’Dowd to reduce Tipperary’s lead to a single point by the 13th minute.

In the 27th minute an Alan Tynan free extended Tipp’s lead but Monaghan reduced it to the minimum when Conor McCarthy kicked his second from play in the 32nd minute. At the break - Tipperary 0-5 Monaghan 0-4.

In the 35th minute, Conor McCarthy landed a long-range point to tie the game.

A minute later Monaghan took the lead when Ferghal McMahon scored. Michael O’Dowd added another in the 40th.

A brilliant point from a tight angle in the 41st minute courtesy of Paul Maher left one between them before an Alan Tynan free a minute later left the sides locked at 0-7 apiece.

Monaghan steadied themselves with points from Conor McCarthy and Ryan McAnespie to lead 0-9 to 0-7 by the 58th minute. Tipperary responded with an Alan Tynan free, but in the first minute of injury time a Ferghal McMahon effort forced Monaghan two clear.

In the 64th minute a Ferghal McMahon free helped Monaghan into a three-point lead before a sensational effort from Adam Treanor made it four two minutes later.

In the 67th minute a second yellow card saw Michael O’Dowd dismissed for Monaghan before Colin O’Riordan kicked a point from a tight angle to leave just three points at the end.