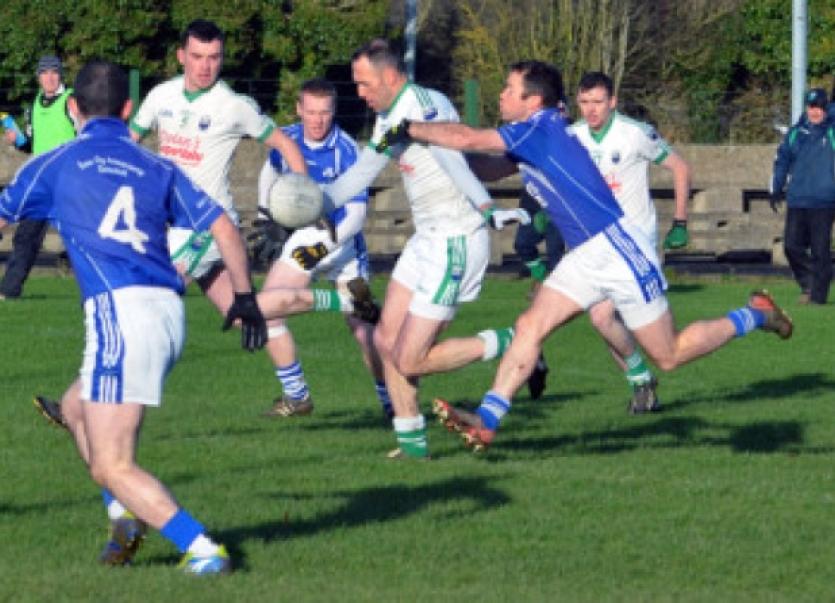 Cahir booked their place in the semi-finals of this year’s county SFC with a workmanlike team win over Eire Og Annacarty/Donohill at Cashel on Sunday last.

Cahir booked their place in the semi-finals of this year’s county SFC with a workmanlike team win over Eire Og Annacarty/Donohill at Cashel on Sunday last.

Seven days on from the drawn game when even extra-time failed to separate the sides, this time round it was a much different story.

Cahir, the South division’s sole survivors in the race for the county title, imposed themselves far more on the game and unlike the first day this match as a contest was well over long before Paddy Russell’s final whistle.

Cahir returned to Leahy Park the better prepared side. They obviously learned much more from the initial encounter and had their homework well done on Eire Og at the second time of asking.

After a long lay-off from competitive action prior to the first meeting, Cahir obviously benefited the most from the drawn game also. The ill-disciplined defence which conceded 10 pointed frees on Sunday week last was much better marshalled this time around, reducing the concessions to placed balls to just three points. But the recipe for success was far more than that. Overall it was a much improved performance in which they bossed Eire Og and played the game on their own roaming, slow-building, recycling type terms.

On a bitterly cold day, Eire Og played with the benefit of a strong breeze in to the dressingroom end for the first half. They had the first score of the game six minutes in, when after being set up by a delightful pass by Brian Fox, Damian O’Brien blasted over with a goal chance on the cards.

Dean Lonergan, with perhaps the most improved display of any from the drawn game, equalised when pointing a left footed kick from 25 metres after nine minutes.

Damian O’Brien with a free edged Eire Og ahead two minutes later as the West side enjoyed their best period of the game, in terms of possession, but a solid Cahir defence were conceding little. The full back line, particularly Mikey O’Connor, were much more alert and had the legs on the opposing attack.

Padraig Whelan with a fine point from played levelled matters at 0-2 apiece on 18 minutes. The West side needed to be making use of the strong wind but it wasn’t happening for them. Liam Casey was the best of the four midfielders and the young Cahir man with some great fielding was winning valuable possession around the middle.

Cahir hit the front in the 26th minute following a great movement. Dean Lonergan and Paddy O’Flaherty were in volved in the build up a couple of times before Benny Hickey finished in style with an excellent point on the run.

Brian Enright in the Cahir goal experienced a hectic few moments in the run-up to the break. After pulling off a fine save he subsequently conceded a free which allowed Damian O’Brien to level. However, Enright made full amends just before the break when saving a definite goal by blocking Eoin Bradshaw’s scorcher.

Cahir went in at half-time with the lead when Dean Lonergan set up Shane Murphy for a point. Leading 0-4 to 0-3 at the interval and with the strong breeze at their backs for the second half it was looking good for Tom McGlinchey’s side.

And so it proved. Similar to the drawn game Cahir broke from the traps well for the second half and within five minutes had stretched their advantage to four points.

Padraig Whelan kicked a free after 90 seconds followed in quick succession by excellent points from Paddy O’Flaherty and target man Dean Lonergan who was growing in confidence.

Brian Fox, whose incisive runs caused so many problems for Cahir the previous Sunday, kept trying to inspire his side forward, and won a free seven minutes in which Damian O’Brien once more kicked over. However, Eire Og were living on scraps now as Cahir tightened their grip. James McGrath was everywhere in a real high-energy display while Robbie Costigan and the half-back line were letting little beyond them.

Long-serving Cahir star Benny Hickey was more effective in terms of possession in the replay also and kicked a second fine point in the 43rd minute. This was quickly followed by a magnificent effort by Liam Casey with his left foot from 45 metres to put the Cahir boys 0-9 to 0-4 to the good midway through the half.

Try as they did Eire Og could make little if any impression on a Cahir side who were now in almost total control. Seven minutes from time the Annacarty/Donohill side had their last score of the game when corner forward Paul Downey kicked a point but they needed a lot more.

Cahir had the game’s final score when Padraig Whelan scored his third point of the day with a late free for a 0-10 to 0-5 victory.

Cahir will be delighted to be in the last four of the county championship. They won’t mind either that they will be rank outsiders on Sunday next against North side Thomas MacDonaghs.

They contain a nice blend of experience and youth. The likes of Brian Enright, Robbie Costigan, Benny Hickey, Padraig Whelan, James McGrath and Paddy O’Flaherty survivors of their only county win in 2003, guiding the youthful Mikey O’Connor, Liam Casey and Dean Lonergan amongst  others.

On Sunday they were best served by Brian Enright, especially for that important save before half-time; Robbie Costigan, Liam Casey, and all six in the hard-working forward unit.

A long year for Eire Og in both codes concluded on Sunday but they lost nothing in defeat and will reflect back on what might have been from the first day, even if they know they didn’t reach that same level in the replay.

Brian Fox and Conor O’Brien led by example from the back while Damian O’Brien was the pick of the forwards. However, just seven points from play in nearly two and a half hours of football was the elephant in the Eire Og dressingroom at the end of the two days.