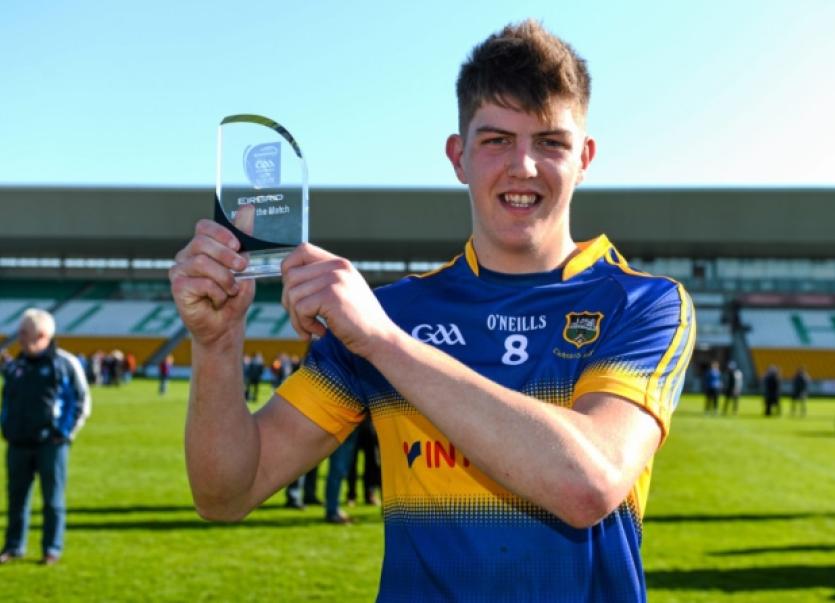 Tipperary midfielder Steven O’Brien, already a winner of Munster under 21 football and Sigerson Cup medals in 2015, will be hoping for another  precious medal on Saturday.

Tipperary midfielder Steven O’Brien, already a winner of Munster under 21 football and Sigerson Cup medals in 2015, will be hoping for another  precious medal on Saturday.

At the recent County GAA Board press evening in Thurles, the Ballina clubman was looking forward to putting in another powerful performance against Tyrone.

Steven, you’re a busy man these days with college and with Tipperary football... In your very first year playing Sigerson Cup football, you were on the winning DCU team, putting in some excellent displays in the process.

“Yeah it was my first year. It was definitely massive. Training with inter-county players and they’re all accomplished inter-county players in their own right. I suppose that training from early November has just stood to me throughout. I feel great now coming into the peak season for county. I have great regard towards the Sigerson, it’s a great competition and it gets lads in the zone early and builds up a bit of  momentum.

“DCU is a well-known college in terms of football. It was always in the back of my mind that I’m going to college and I want to play football as well. If you want to play, you want to achieve. Going on DCU’s past record, it was one of the things that swung me towards there,” he added.

And coming in touch with the likes of Sean Boylan and Niall Moyna on the line and training the teams...

“Sean is well able to relate to players. He’s actually a true gentleman. He was a bit of craic, he’d always come in and he’d make sure to meet every man before training and shake their hands and see how they were. He’s a very good people person, he’d always engage with the players no matter who you are. His knowledge of the game is just superb. You knew that he knew so much and wanted to pass it on to us,” continued Steven.

And going in to such a star-studded dressing room and coming from Tipperary.. what was that like?

“I would have personally felt myself when I was going for the first couple of trials, I’m only from Tipp. But the lads made you feel welcome straight away, especially the older lads on the panel. It doesn’t matter where you’re from. They especially seemed to respect Tipp for the work that has been done in Tipperary over the last number of years. I suppose it was easy going in because the lads brought you along,” added Steven, man of the match in the recent semi-final win over Dublin.

Asked for his thoughts on finally getting the better of Cork in the provincial final after a couple of set-backs?

“For myself personally, I was absolutely thrilled. When we were minor in 2012, we won the Munster championship and we went on to play Mayo in an All-Ireland quarter-final. I suppose on the day nothing went our way and we let ourselves down I felt, and got knocked out. I always knew that I really wanted to get back there with the same group of players to prove ourselves again.

“It’s just been brilliant the last two years getting to the final against Cork. Losing the first year in Thurles was  awful hard to lose in your own patch. Then to go down to Páirc Ui Rinn and basically not show up on the day was awful disappointing after all the hard work we’d done. There was no way any of the lads involved were going to leave it behind. Most of the lads had been there last year and they were bitterly disappointed,” he added.

And there is no question of Tipperary leaving it at that now for the year?

“The lads got their heads down from the clouds fairly lively. Tommy and the lads were very good to ground us, we knew we’d only won Munster. There was so much more in this team. We couldn’t afford to just stop there. That’s going back to when I was minor, that’s what I did, we were happy winning Munster and that was it. A couple of the older lads on the panel said Munster was great but believe us there is an All-Ireland title in this panel if we believe. Thankfully preparations went great during the week and we got over the line last weekend.”

Moving on to Tullamore against Dublin and how did the team feel at half-time four points down?

“We felt confident in there at half-time. We knew that we’d played okay in the first-half. We’d limited their scoring opportunities, we’d closed them down. Ourselves we’d dropped two balls into the keepers hands and kicked a bad wide, missed one or two frees. We knew that with the wind I suppose, it was easier to play with it because you could attack into it better. We just got the ball into the right lads and thankfully the ball went over on the day, he said.

How did that semi-final win compare to beating the Dubs in the All-Ireland minor final in 2011?

“Of course it was different, 2011 we’d won a final. At the same time beating Dublin is brilliant but we’d nothing won. Great to get to a final but at the same time there’s no point getting there, we really want to go out and give it a right shot. Celebrations were ecstatic on the win, but soon as we got back into the dressing room we were focused on the next day.”

“Yeah it’s not a bad track record to have,” quickly modestly parking the answer.

In this age when “dual code” is a hot topic, Steven was asked about his preference between hurling and football?

“I do both. My club is just hurling. We just concentrate on the club hurling. It’s great to just have football county because you’re not torn between too many training sessions. Every session I’ve been going to with football I enjoy it because I don’t feel under pressure that I’ve to train tonight with the county and tomorrow with the club, it’s a nice way to be. You always have a clear mind going training and you’re fresh.

“There’s been a good few lads through the years that have played Tipp football (from Ballina). I don’t play club football. It’s rare alright. We didn’t play U21 or anything this year. We’re a small village and hurling is the number one,” added Steven, one of two North Tipp men in the Tipp starting 15 for Saturday.

Asked of his clubmate Michael Breen, now a starter with Tipperary senior hurlers?

“Mikey’s flying it. I’m absolutely delighted for him. The man works so hard. Over the last two years, he picked up a bit of an injury in 2013, but since then he’s absolutely flying it. He’s done his rehab and everything superbly. I’m delighted he’s taken his chance this year.”

And on to the big final against Tyrone on Saturday?

“Yeah it’s unusual. We haven’t come across them before. Look they seem to be a very good side. They beat a very good Roscommon team to get to the final and they’ll be respected totally in their own right for the way they play and the way they go about it. People will say to you the way they play is not nice but it’s winning matches for them. Hopefully now we can get our heads screwed on right and give them a right good battle.”

And they have big names likes Brian Dooher and Peter Canavan involved?

“It’s massive. It must be great to have that experience on the sideline. They’d really give you some excellent advice. They just know how to win. It doesn’t matter looking well or looking ugly, it’s just winning and they know how to do it,” said Steven

This is the final hurdle?

“After we played Clare, Colin brought us in and we called it step one of four. We were always just gearing small steps up the ladder. Now we’re on the final hurdle. We have to make sure not to fall at this hurdle now,” concluded  Steven O’Brien.