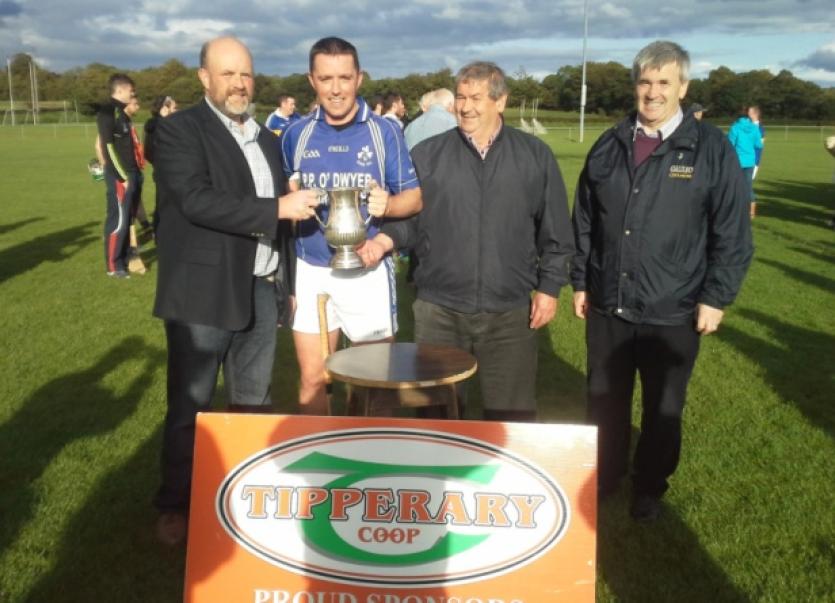 Eire Og Annacarty Donohill are Tipperary Co-Op Junior B Hurling champions for the first time in ten years following a 3-15 to 3-8 victory over Sean Treacys in the final on Saturday last in Cappawhite.

Gearoid Ryan got Eire Og off the mark after just two minutes with a point from a free but this was immediately cancelled out from the resulting puck out by Sean Kennedy. Points from Sean Breen and David Breen saw Eire Og open up an early two point lead but Ollie Carr responded with a free for Sean Treacys. Gearoid Ryan added two more points from a free and play. John Butler tried to keep Sean Treacys in touch as he scored a long range point from inside his own 65. Gearoid Ryan continued to be a thorn in Treacys side as he added another two points from placed balls but again John Butler responded with a point for Sean Treacys at the other end.

With about ten minutes to the break Eire Og led by three points and started playing direct ball into their full forward line which was causing problems for the Sean Treacys defence. John Quinn (Eire Og) and Seamus Costello (Sean Treacys) were now having a really good duel. Gearoid Ryan added two further points from play and one from a free. Sean Kennedy responded with Sean Treacys sole point in this period. Eire Og led at the interval 0-10 to 0-5.

Sean Treacys upped the ante almost immediately on the restart and within two minutes the gap was down to two with a great Joe Carey goal followed wtihin a minute with a second from Ollie Carr. Treacys were enjoying the better of possession but Gearoid Ryan continued his top form and levelled with a pointed free.

On the three quarter hour mark Eire Og were two points up with Gearoid Ryan again accurate from placed balls. Damien Nolan reduced the deficit to the minimum. John Butler tied up the game yet again when he pointed from play. Eire Og responded well and when a high ball broke to substitute Michael McGrath, he made no mistake in finding the back of the net. John Butler kept the Sean Treacys scoreboard ticking over and he added another point to reduce Eire Og’s lead back to two points.

Treacys hit back with a Jamie O’Dwyer goal and Pat Aherne tied up the game again with four minutes remaining. Eire Og edged ahead with a minute to go when Gearoid Ryan pointed from a free.

Eire Og were four points clear when substitute Michael McGrath found the net as injury time approached. Treacys were not ready to give up and Jamie O’Dwyer was alert in the Eire Og goal to deny Joe Carey. Veteran John Quinn rounded off the scoring and completely sealed Eire Og’s victory when he goaled to wild cheers from the Eire Og supporters.