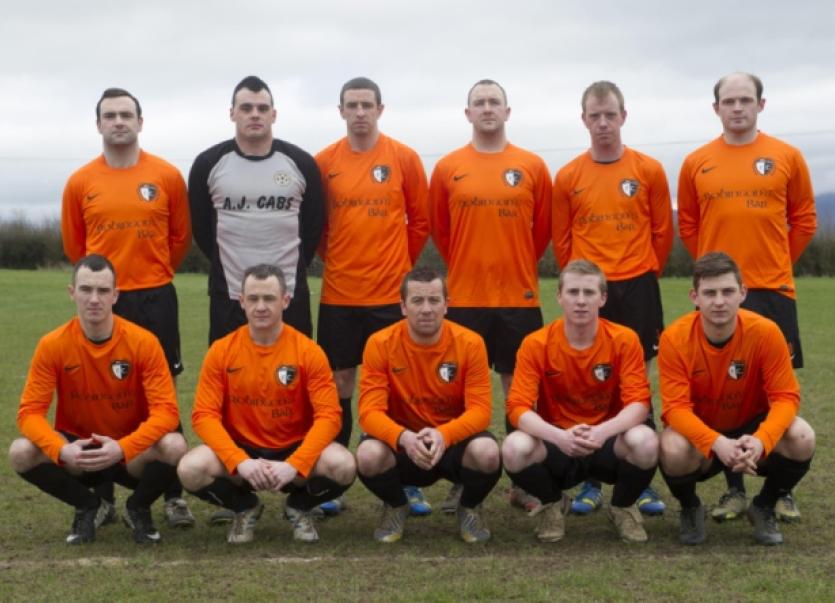 Both semi-finals of the Peter O’Reilly Cup took place on Sunday with Slieveradagh United and Cashel Town booking their places in the cup decider.

Both semi-finals of the Peter O’Reilly Cup took place on Sunday with Slieveradagh United and Cashel Town booking their places in the cup decider.

Fourth Division Slieveardagh pulled off the shock result of the day, when they eclipsed Third Division high fliers Donohill in Ballingarry on Sunday morning.

The away side had been on a very good run of form, and started favourites, but they were ambushed by a home team who has had some very good form of late themselves, and who didn’t just win this game, but comprehensively out played and out fought their higher ranked opponents.

Right from the get go, United set about their task with vigour, and had only to wait until the sixth minute to open the scoring, when Eoin Burke beat the offside trap and the Donohill defence to fire past the keeper from close range.

Stung by this, the visitors roared back into the game, but they were repelled time after time by a well disciplined and well drilled home defence. And then, right on the cusp of half time, Slieveardagh United doubled their lead, when free scoring Ian Ivors powered home a free kick, to make the shock look increasingly likely.

The visitors again controlled most of the play in the second half, but again came up against a brick wall when it came to getting past the home team, and 15 minutes before the end, a home breakaway ended in a penalty kick, and again Ivors slotted home from the set piece.

This goal broke the hearts and the resolve of the home side, and Eoin Burke mirrored Ivors by getting his second ten minutes from time, to continue one of the TSDL’s newest sides chase for silverware in their first year of competition.

This game was like so many semi-finals, t a close tense affair, where both sides seemed more scared of losing, than wanting to take a chance in the hope of winning. That meant little was created early on in the game, with the only real chance of the first half falling to the home team after 25 minutes, when a shot crashed off the visitors post before rebounding to safety.

Things got better almost instantly in the second half, and it was only two minutes old, when Michael Mackey scored a wonderful goal from an overhead kick leaving the stranded Bansha Celtic keeper with no chance.

The game opened up after the goal, and finally chances began to appear, with both sides being guilty of poor finishing, and it seemed that the game was finally put to bed two minutes from time, when Cashel’s Ger O’Dwyer headed home at the back post to give his side a two goal lead.

That wasn’t the final act of the game however, as Bansha threw all caution to the wind and scored a goal as the game entered injury time to set up a dramatic finish.

The higher ranked away side however composed themselves once again, and played out the last minutes in front, securing a final spot for themselves in a few weeks’ time.