Christmas cracker - Final ends in draw but Cahir should have won 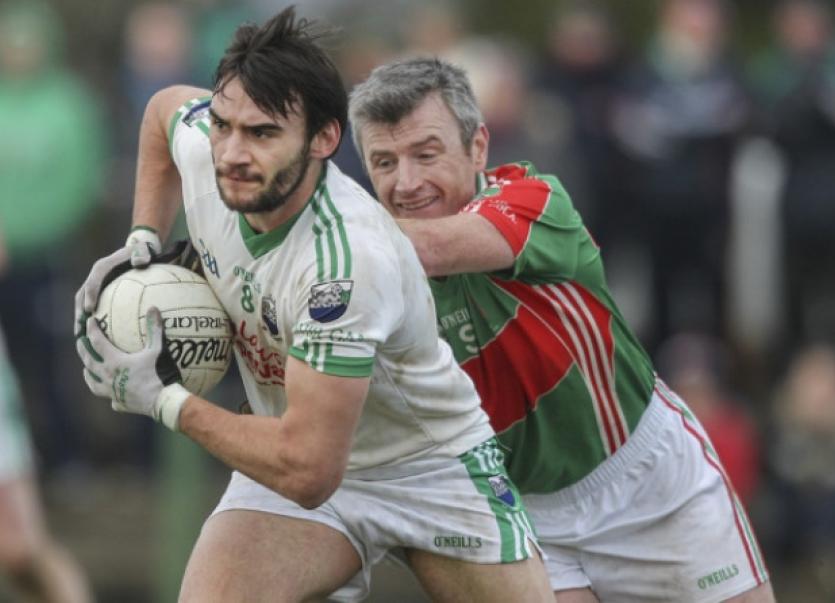 Sunday’s county senior football final between Cahir and Loughmore/Castleiney served up a cracking game of football at the end of which neither side deserved to lose.

Sunday’s county senior football final between Cahir and Loughmore/Castleiney served up a cracking game of football at the end of which neither side deserved to lose.

At least now both sides can enjoy Christmas dinner without the disappointment of defeat hanging over them, but with the replay back in Cashel on this Friday, St. Stephen’s Day, it will be a quiet Christmas for both panel of players.

The 1,550 attendance at Leahy Park witnessed a fiercely contested final, well refereed by Paddy Russell, in which the sides were level on seven occasions. As the day ebbed and flowed both sides had their good spells and both had their chances to seal victory. However, at the end of the day, perhaps Cahir may feel they had that slight edge on the reigning champions which they failed to drive home. But it is cliched in sporting parlance now, you just never get to the end of Loughmore/Castleiney in a tight game.

For a game in late December, the day proved unseasonally mild for Christmas Week and perfect for the county’s football showpiece.

Cahir had an early let-off in the third minute when veteran keeper Brian Enright pulled off a magnificent save from Cian Hennessy before John McGrath opened the scoring with a Loughmore free a minute later.

Cahir quickly got in to their stride though and DeanLonergan kicke da left-footed equaliser almost immediately.

The challengers got a tremendous boost after nine minutes when Paddy O’Flaherty’s attempt at a point in to a stiff wind fell short and Robbie Costigan fisted home a goal from the edge of the square past Dominic Brennan.

A minute later Cahir stretched that advantage to four points when Sean O’Connor went on a great solo run through the middle to set up Paddy O’Flaherty for a well-taken point.

Leading 1-2 to 0-1 after just eight minutes, Cahir were enjoying a perfect start. However, they were rocked in the 13th minute. Noel McGrath won a ball at midfield and in a move with his brother John they set up Liam McGrath who cracked a thunderous shot in underneath the crossbar to put the champions right back in it.

Five minutes later the sides were level when a move once more between John and Noel McGrath set up corner-back Tomás McGrath for an excellent point.

Cian Hennessy who had that early chance of a goal blocked, made full amends in the 20th minute. Put through by the influential John McGrath, Hennessy drove on to force another save from Enright before sneaking the ball over the line from the rebound.

Suddenly from four down to three points up, the champions had grabbed ownership of the game.

Cahir, playing for a fourth consecutive Sunday, were in no mood for rolling over, and regained the lead with a mini rally in the last 10 minutes of the opening half.

Dean Lonergan who impressed all day finished off a Benny Hickey/Paddy O’Flaherty move with a fine point on 21 minutes.

As the South side’s forwards probed the Loughmore defence, frees were conceded and Padraig Whelan with a brace of frees restored parity for the third time in the 27th minute. The second of these frees, from a very difficult angle way out right, was inspirational to his side.

Just before the interval Benny Hickey got through on goal only to be fouled but the same player put the resultant free over for a 1-6 to 2-2 half-time advantage for Cahir.

With the wind behind them to come and a slender lead, Cahir were the happier at the break but unlike previous games were slow to re-ignite after the re-start.

Credit to the champions they forced the issue on the resumption and a pair of frees by Liam Treacy and John McGrath had them back in front by 37 minutes.

A minute later they put a nice passing movement together which had the Cahir backline at sixes and sevens before full-back Gerald Hally made a match-saving goalline clearance that might have killed off his team otherwise.

The see-saw battle continued and Cahir responded with two of their own points from another superbly taken Padraig Whelan free and a Benny Hickey point to lead once again.

Tomás McGrath again up from corner back kicked his second point of the day to level matters once again at 1-8 to 2-5.

On 44 minutes Liam Treacy pointed a Loughmore/ Castleiney free for the lead before Cahir responded.

A mazy movement involving Eoin Donaghy, Sean O’Connor and Dean Lonergan put Eddie Kendrick through on goal but his shot went agonisingly over with the goal at his mercy. The point restored parity for the sixth time but it could have been a ‘county clincher’ had the ball gone under the crossbar.

The final 15 minutes were gripping as both sides gave it their all. Cahir with the wind advantage were certainly playing the more football in their opponents half but chances were at a premium.

Seven minutes from time Benny Hickey kicked a monster of a free from 55 metres for the lead once again as  Cahir desperately tried to grind out the win. However, with 59 minutes on the clock Cian Hennessy burst through the middle to score a superb equalising point. And at the final whistle few could complain.

For Cahir the midfielders of Eddie Kendrick and particularly Liam Casey in the second half were magnificent. Casey’s high fielding at vital times against Noel and John McGrath launched many Cahir attacks. The defence led by Aidan Casey were very solid with Gerald Hally and Sean O’Connor having fine games. Dean Lonergan was towering in the forwards, ably supported by Paddy O’Flaherty, Benny Hickey and Padraig Whelan.

Loughmore will be relieved at the second chance knowing they didn’t hit their usual heights on Sunday last.