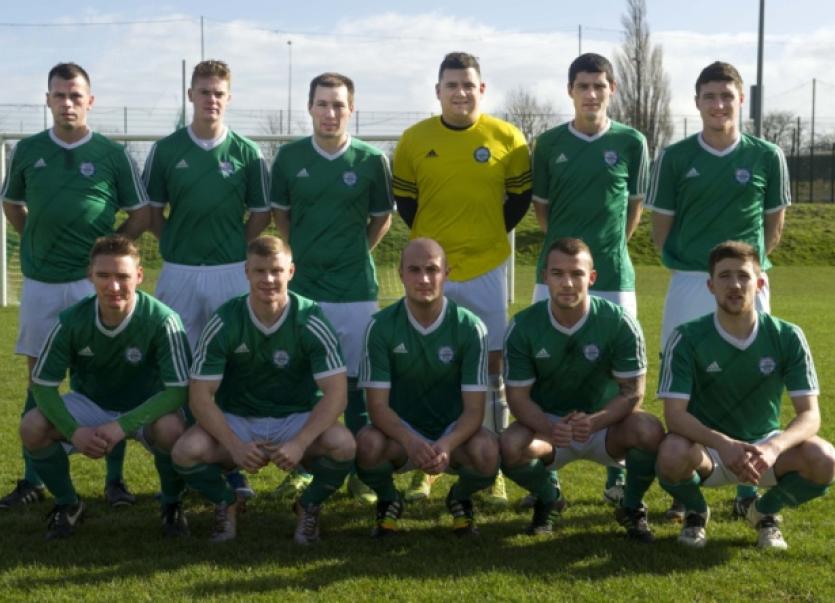 Fresh from last week’s victory over local rivals Clonmel Town, Clonmel Celtic showed that they are getting stronger as the season goes on, when they welcomed back Evan Maguire from a layoff, and watch him underline his importance to the clubs cause with a devastating four goal haul that saw Celtic cruise through to the Tipperary Cup semi-final with a five goal win against Second Division Galbally United on Sunday. Despite making six changes to their starting line up from the previous week, they always had too much in the tank against a game Galbally side whose sights are likely more set on promotion than Cup success this season. Celtic were ahead after just five minutes with a smart finish from Seanie O’Hara, but Galbally almost levelled matters four minutes later when they saw a free kick rattle off the home sides crossbar. This was as good as it got however, and both Aaron Moroney and Paul Kennedy came close before Celtic doubled their lead in the twenty fifth minute. Moroney’s cross found Evan Maguire who controlled the centre before calmly slotting home. This was the end of the first half scoring, but the home side made the game safe five minutes into the second period minutes with Evan Maguire scoring his second finishing a well worked move by his side. The visitors showed that there was some fight in them a few minutes later when Ricky Slattery was rewarded for his tireless work with a goal to make it three to one. But Celtic’s captain Craig Condon restored Celtic’s three goal advantage fifteen minutes minutes from the end, before it became all about the returning Maguire who scored twice in the last 10 minutes to wrap up a 6-1 win for Celtic.

The holders advanced smoothly into the semi-finals of this year’s Tipperary Cup with a comfortable win over First Division Bansha Celtic last Friday night in Cooke Park.

The conditions negated the chances of good football and muted a crowd who spent as much of the night trying to escape the shivering elements as enjoying the football on show. That said, the Saints went about their task in a workmanlike manner and were unlucky not to make the breakthrough after only five minutes when Russell Quirke’s in swinging corner almost deceived the defence before being headed off the line.

Quirke had another chance six minutes later which was repelled, but the home side finally hit the front on 18 minutes when David Slattery was on the end of the Quirke cross to power home.

At this point the only resistance being offered by Celtic were from set pieces by Tony Egan, but none really worried newly announced Irish International keeper Aaron Wall in the St. Michael’s goal.

The home side also had chances to increase their lead before the break but were unable to do so. They did however continue their pattern of dominance in the second period, and made it 2-0 on the hour mark when Brian Buckley headed home another pin point corner from Russell Quirke.

Bansha finally tested Wall in the Saints goal on 77 seven minutes when Niall Daly’s effort was tipped over the crossbar, but eight minutes later, the home side finally put the result beyond all doubt, when Richie Ryan set John O’Brien up to fire home from close range and make the final score three goals to the home side, without reply.

Once again the Saints juggernaut seems to be on the roll, and it looks like this is another title that they won’t be giving up easy.

This was probably the hardest of the three Cup ties at the weekend, with Cashel looking for revenge for an earlier home league defeat, and Borris trying to put abject league form behind them and embark on a decent Cup run, so it all pointed towards a well contested game at Newhill on Sunday morning.

Alas, the elements decided to intervene, and the game kicked off in very poor conditions with high winds and incessant rain making any kind of good play difficult to achieve.

That said, the home side were presented with a glorious chance to open the scoring after only five minutes when they were awarded a penalty, but Richie Ryan in the Cashel goal made a magnificent save to keep the teams level.

Ryan came to Cashel’s rescue again in the 18th minute when Michael Butler was released by his midfield and bore down in a one on one situation with the Cashel keeper, but again it was the experienced shot stopper that had the final say. There were few further first half and the teams went to the break even.

Cashel then took charge of the game in the second period, and began to pepper the home side’s goal with chance after chance, and only brilliance by Borris’ teenage goalkeeper Anto McKelvey kept the visitors from over running the home defence.

Cashel did finally breach Mc Kelvey’s goal however with 20 minutes to go, when James Harding popped up to finish out a quick break from the visitors defence. This forced Borris into all-out attack and they were caught again five minutes from the end when Harding got his second after a scramble in the box, to put his side one step away from their first Cup final appearance in over twenty years.