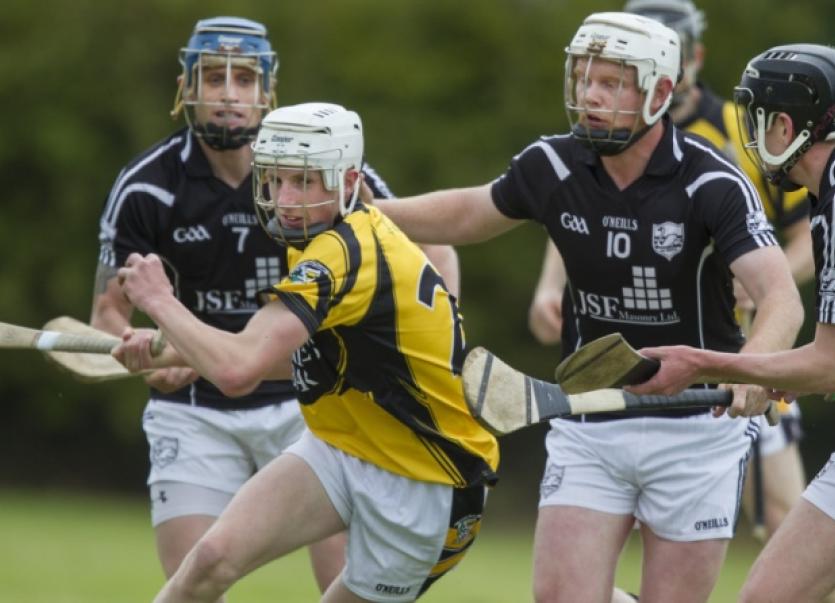 Young Carrick Swans full-forward Colin Waters was the star of the show against the Kickhams in this Roinn 2 Group 1 SHC game at Cahir on Saturday evening last.

Young Carrick Swans full-forward Colin Waters was the star of the show against the Kickhams in this Roinn 2 Group 1 SHC game at Cahir on Saturday evening last.

His personal tally of 4-2, mixing abundant skill and clinical opportunism throughout, broke the hearts of the Knockavilla/Donaskeigh backs who struggled over the hour.

The win puts Swans in with a chance of topping the table if they beat unbeaten JK Brackens in the final game of the group. Kickhams have now completed their three-game programme with one win and two defeats.

Going on the formline that the Kickhams had already defeated Moyne, whereas the Swan only drew with the Mid Tipp side, one felt this would be a close encounter. Quite simply it wasn’t. Once Colin Waters scored his first goal in the third minute it became a long long evening thereafter for the West Tipp side.

Using all of his height advantage against full-back Michael Heelan, Waters caught Dean Walsh’s long delivery on the edge of the square to turn and blast home his first goal.

By the end of the opening quarter it was 1-4 to 0-3 as a much more fired up and alert Tom Waters managed Swans went about their business.

A second goal for the Swans came on 17 minutes when a long range effort at a point from Danny O’Hanlon fell short and goalkeeper Paddy Ryan failed to deal with it.

Their third goal on 22 minutes, perhaps the best of the evening, started with a superb Danny O’Hanlon high catch in midfield which sent Swans captain Dean Waters through and he made all of 40 metres before blasting his side into a 3-5 to 0-4 lead.

With the Swans all of 10 points clear and playing against the wind, it seemed there could be no way back for the Kickhams - there wasn’t.

But in fairness they never stopped trying and got some little reward two minutes before the break when Brendan Ryan blasted off the ground to the net after a goalmouth scramble.

At the break the Carrick side led 3-5 to 1-5. All their scores (bar a ’65 from Colin Loughman) came from play - with points from Colin Waters, Gavin O’Halloran, Damien McCarthy and Dwayne Fogarty. Kickhams managed only a single point from play in the first half via Killian Loughman in the 14th minute.

The second half was a memorable one for Colin Waters with a hat-trick of green flags.

The first came two minutes in; Dwayne Fogarty sent in a ball which young Waters needed two hurley touches and no hands to control and place past the keeper. Nice stickwork indeed.

The second goal came four minutes later when a shot by Damien McCarthy was saved, but poacher-like Colin Waters was there to sweep it home.

And half-way through the second period he took a pass from Damien McCarthy and blasted home his fourth and the Swans’ sixth goal. At that stage the scoreline read 6-7 to 2-6; Knockavilla/Donaskeigh having no answer to the almost incessant onslaught.

The second Kickhams goal which came 10 minutes into the second half was again scored by Brendan Ryan after Shane Morrissey’s effort was initally saved by Kieran Lonergan. Even with 20 minutes remaining it was only a consolation.

Over the final quarter Kickhams did manage to outscore their opponents 0-5 to 0-3 but at this stage the game was well over as a contest.

Over the hour Kickhams managed just three points from play with five long range frees from Eoin Carew putting respectability on the scoreline. The South Tipp side were much more effective from play and towards the end tagged on fine points from Colin Waters from a tight angle, Dale O’Hanlon and Dean Walsh.

The Swans will be delighted with this performance, much improved from their opening game. Besides Colin Waters others to shine were Darren Fahey, Alan O’Sullivan, Dale O’Hanlon, Stephen Hahessy and Gavin O’Halloran, while all the forward line did well.

For Kickhams Ger Browne was their best on the day but Eoin Carew, James Shanahan and Shane Morrissey when he came on gave their all.

P.S.: There was a minute’s silence before the game in memory of Knockavilla/Donaskeigh clubman and former player Dominic Browne who died the previous week at the Tipperay v Tyrone game at Parnell Park, Dublin. R.I.P.