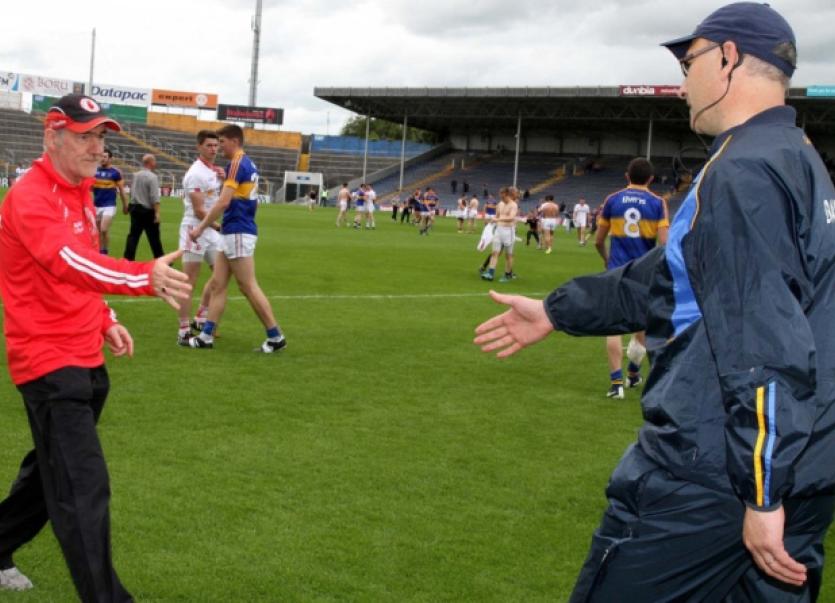 In the immediate aftermath of Tipperary’s defeat to Tyrone at Semple Stadium on Saturday last, Tipp football manager Peter Creedon announced his resignation from the job.

In the immediate aftermath of Tipperary’s defeat to Tyrone at Semple Stadium on Saturday last, Tipp football manager Peter Creedon announced his resignation from the job.

The Roscarbery man had decided after 39 months to step down primarily to concentrate on his career - he has recently been appointed as principal of Coláiste Dun Iascaigh in Cahir. But having been involved in Tipperary football for 10 of the past 12 years in some management capacity or other, the West Corkman also feels a fresh voice in the dressingroom might not be a bad idea either for football in the county.

Before looking back on his time in the job since his first game in April 2012 (when Tipperary defeated Offaly by 0-11 to 0-8 in Clonmel in Division 3 of the National Football League) Creedon reflected on the Tipp defeat to Tyrone.

For the most part he lamented the fact that he didn’t have a full team to choose from with injuries and tiredness a factor.

“We ran out of legs to a degree and Tyrone played really well. We have no qualms they were much better in the second half.

“We hadn’t Colin at full tilt, we hadn’t George, we hadn’t Steven. Not making excuses but we need everyone going at full tilt. What has been great about this year is that the  Kerry game and the Tyrone game, has left us under no illusions as what needs to be done to get up to the next level.”

Asked about the closeness of the teams at half-time when Tyrone led by just a single point and what had he planned for the second period of the game.

“We wanted to try and keep the ball and go wide and try and create scoring chances by being more composed up front but their defence was excellent, top notch and they ran out deserving winners. We fought to the bitter end but we just did not have enough penetration in the middle third really even to get the ball to the inside line but that’s down to Tyrone’s excellent work rate.”

“We lost energy around the middle of the field. We hadn’t Steven at full tilt, we hand’t Colin, we hadn’t George, we hadn’t Ian Fahey and they are four of our big ball winners, our physicality, if we had them we still would have been under pressure against Tyrone but the game is over now we just move on.”

“Tyrone are gaining in energy and momentum and their defence is excellent and it looks like they are going to hold teams and they are going to be there or thereabouts but look they are there every year in either the quarter-finals or the semi-finals. As long as they can compete in the middle of the field they will be ok.”

Way back in 2012 following John Evan’s shock resignation from the Tipp job after his side had been relegated, Peter Creedon answered the County Board’s call and in the intervening period has served the Premier County well as manager and leaves Tipperary football in a healthier position overall from the situation he inherited.

The county are back in  Division 3 and comfortably holding their own there; they won the Division 4 title in Croke Park in 2014 defeating Clare in the final; under his watch Tipp broke an 11-year run without winning a  Munster SFC game - winning last year and again this year; Creedon took Tipp to the last 12 in the Qualifiers in 2012 and 2014; he was part of the management team that won this year’s Munster under 21 title and brought this grade to their first-ever All-Ireland football final in May. Also in All-Ireland qualifiers his sides have won six times from 10 games - prior to his ascendency Tipp had won just three qualifiers from 11 outings.

What cannot be measured precisely though is the respect and pride Peter Creedon has returned to Tipperary football - certainly our profile amongst other counties hasn’t been this high for years.

Commenting on his decision to resign he said...

“I am stepping down I have four years done. I have 10 of 12 years done between minor and under 21 and senior and four good years put in to it and I am starting a new job as principal of a big school and things like that. So it might be no harm to have a fresh voice. I was lucky to have had a brilliant management team and it was my job to make sure I didn’t feck it up,” he said.

“We are a bit like the Dublin hurlers, we’re the Tipperary footballers, we are making progress but we have learned from Kerry and Tyrone.  Tyrone beat us by 12 but we were surviving more so than competing in the second half. We got to an All-Ireland under 21 final, we did okay in Divisision 3. We are kind of a neutral team. We are hammering  Division 3 and 4 teams in championship and yet struggling to get 10, 12, 13 scores against the top teams so that’s credit to the top teams for the level they are at.

“In my time now we have played Galway and we’ve played Down, we played Tyrone today, Kerry on numerous occasions and we are learning all the time. I have no doubt the breakthrough will come, it might be a year or two but it will come,” he added.

What now needs to happen for Tipperary football...

“I think it is stepping stones. We need to get in to Division 2 and then get a season in Division 1. Brilliant. But we certainly need to get up to Division 2 where we will get seven or eight harder games because our younger players are used to 60 minutes (under 21 games) and there is a big jump from a 60 minute match to a 70 minute match and that all takes time to get the work into the guys legs. And it will come. We are just unfortunate to be in a province where you have two of the best teams, Cork and Kerry.

“We need to have a good league campaign next season. It’s going to be competitive you are looking at Sligo, they are going well, you are looking at Westmeath, Fermanagh are out (promoted to Division 2 this year). It’s about hard work actually there is no formula for it. Hunger is a great sauce, the more hunger you have the better,” he matter-of-factly stated.

“I have some brilliant memories. It’s like being involved with the under 12 team at your local club it’s a bit of craic among the mentors, a bit of banter in the dressingroom, a few wins, a few losses along the way. That’s what I really enjoyed. We have a great bunch of players. You see guys rushing out of work in Dublin and getting a train down to training and making those huge sacrifices. And there is great credit due to the top teams as well because they are obviously working exceptionally hard to maintain their standards. I feel sympathy for teams in Division 3 and Division 4. Is there a competition there really for us. We love battling with Tyrone but maybe there is a bit of belief and thought to be put into that going forward.”

And asked of his plans for the future, he concluded...

“You know what I will do. I will go back to the Sarsfields under 14/16 girls team and give a hand out with my daughters and stuff like that. Football is football and hurling is hurling and it’s about people involved and challenging yourself to be the best you can be. And while I have enjoyed the inter-county scene I will have no issues with being a hurler on the ditch, is that what you say, is it. Even on the ditch or a hurler.”