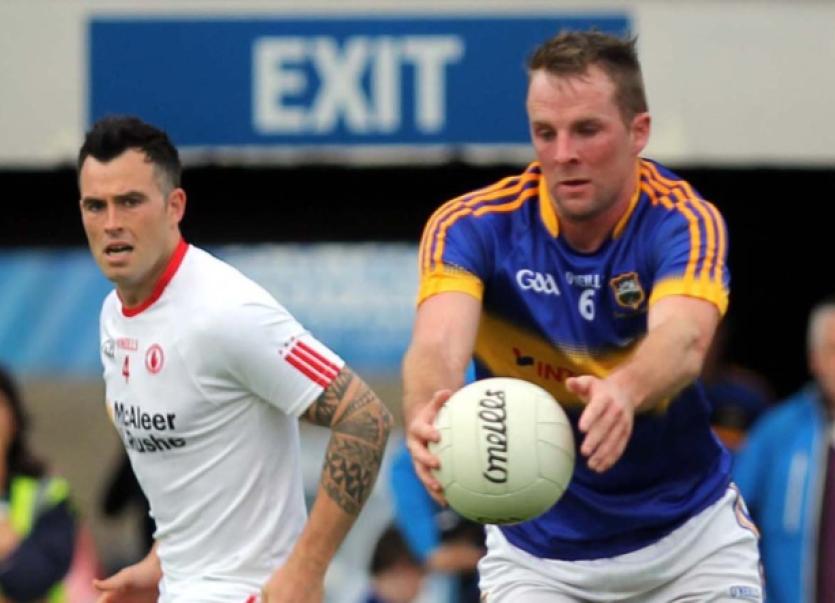 Tipp senior footballers’ exit from the All-Ireland series at Semple Stadium on Saturday last, while no great surprise, was more disappointing than what normally comes with end-of-season elimination.

Tipp senior footballers’ exit from the All-Ireland series at Semple Stadium on Saturday last, while no great surprise, was more disappointing than what normally comes with end-of-season elimination.

The 12-points margin of defeat against Tyrone in front of the home followers was as clear-cut and emphatic as one could witness. For the second time in five weeks, following on from their provincial defeat to Kerry also at Semple Stadium, Tipperary were cruelly exposed against the the country’s top footballing sides. There is a gulf of class to be bridged still and the harsh reality of that fact was hammered home especially in the second half of last Saturday’s Round 3B Qualifier against Mickey Harte’s Tyrone.

The defeat also marks the end of Tipp manager Peter Creedon’s almost-four-year tenure with the senior side - and many more years as minor and under 21 boss prior to that appointment. While well flagged in advance that the West Corkman’s reign would end with the conclusion of this campaign, Creedon’s departure will nonetheless be a big loss.

Despite the disappointment of Saturday and perhaps the failure of Tipperary to make the big leap at senior level, there is no doubting in anyone’s reckoning that Peter Creedon leaves Tipperary football in a better place from where it was when he took over after John Evans’ sudden departure in 2012. To his credit, Creedon, a real football man with the game at heart, stood for nothing more than the progression of Tipperary football. In that regard, while not making up the ground he would have wished, certainly raised the profile and the respect that now goes hand in hand with Tipperary football.

But back to Saturday’s game with Tyrone.

Notwithstanding the choreography once again of naming a team that would be way off the starting 15, Tipp showed just two changes from the Louth game with the welcome return of midfielder Steven O’Brien and also a starting place this time for Brian Fox. O’Brien’s return was both a fillip and a gamble considering his recent hamstring injury. It worked with limited effect for a period of the game but clearly the talented Ballina man was well off his usual intensity and fitness levels.

Tyrone started with the wind at their backs into the town end and after the first 11 minutes led 0-4 to 0-1 with their forwards pressing at every opportunity and forcing three points from frees. Team captain Sean Cavanagh, making a record 76th championship apperance for the Mid Ulster side had their opening point from play with a lovely effort from 35 metres in the fifth minute.

Tipp eventually found their feet and took the game to Tyrone and came from three points down to level within a five minute period between the 15th and 20th minute. Kevin O’Halloran who had opened the Premier account with a tricky free in the ninth minute converted a 45 on 15 minutes to bring the margin back to two. Points in quick succession by Michael Quinlivan and Robbie Kiely made it 0-4 to 0-4 apiece as the Tipp followers, amongst the 4,620 attendance, tried to urge on their side.

Sadly those two points in the space of a minute or so were to be Tipp’s only points from play in the entire game. They would go the next 51 minutes (excluding time added-on in both halves) and not score from play.

Tyrone’s outstanding wing-back Peter Harte who covered every inch of Semple Stadium, kicked his side back in to the lead with a great point from 45 metres after 21 minutes. Soon the lead was back out to three following two quick fire scores from Sean Cavanagh and another from Harte.

It looked like the hard-working, forever-probing Tyrone side had a couple of extra gears, plus an ability to pick off a point from distance when needed. On the contrary Tipp seemed one-paced and sadly lacking the ability to kick points against a water-tight defence who put in numerous diving blocks over the 70 minutes. Up close and personal it was a reality check for Tipp as to where they have to get to compete at the top table.

To their credit Tipp staged another mini-rally before half-time. Colin O’Riordan, who put in a great effort in the first half before visibly tiring, won a free in the 28th minute which O’Halloran impressively converted from 40 metres. And when the ever-impressive lion-hearted Peter Acheson won another free when cutting through, O’Halloran slotted the 48 metres free over to make it 0-7 to 0-6 with half-time approaching.

A minute before the break Michael Quinlivan nailed Conor Meyler with an honest shoulder and thereafter an extended “handbags” ensued. Four yellow cards brought the sideshow to a conclusion, but significantly a possible levelling free that Tipp had been awarded was overturned and the Red Hand side went in a point up at the break.

The expectation at half-time was that the second half was teed up for a cracker. Sadly it was anything but with Tyrone completely dominating and outscoring Tipperary by 0-12 to 0-1. Tipp’s only score, a pointed free, came five minutes from time from Kevin O’Halloran.

At the commencement of the second half Tipp did have a chance of a momentum-gathering point when an effort from Seamus Kennedy fell down off the post into a shaky keeper’s hands. It was all so ominous after that.

A patched together Tipperary diamond around the centre was clearly struggling, O’Brien had run out of steam, O’Riordan was going almost on one leg and Kiely’s hamstrings were a constant hindrance to his performance. Tyrone took over and by the half-way stage of the second period had gone seven points clear.

Things went from bad to worse. Tipp substitute Liam Casey who was on the field for just two minutes was shown a straight red for cheaply leaving a leg on Colm Cavanagh while the Tyrone player was on the ground. He deserved his red card. No arguments.

Two minutes later yet another setback for Tipp with Ciaran McDonald’s black card. By day’s end, perhaps indicative of the pressure they were under all through, Tipp received the whole gamut of referee Gough’s cards - one red, one black and seven yellows. A somewhat saintly and well disciplined Tyrone took just three yellows in 70 minutes.

There were no answers after that. The last quarter was just survival according to the Tipp manager Peter Creedon, the competitive edge gone. Mattie Donnelly came to the fore with three excellent second half points and fittingly their captain Sean Cavanagh wrapped up proceedings with his third point which on another day might have been worked more for a green flag. The final whistle was a relief.

Despite the defeat there were some fine performances for Tipperary. A hard-working defence did very well, particularly in the opening half. Ciaran McDonald led as ever while Moyle Rovers’ Alan Campbell had perhaps his best game in a Tipp jersey with some excellent interceptions and general play. Peter Acheson never stopped taking the game to his opponents while Colin O’Riordan put in a good first half. Hard-working Michael Quinlivan looked a threat in possession but there wasn’t half enough of that on the day against a superb Tyrone defence. Kevin O’Halloran’s free-taking was top drawer all through.