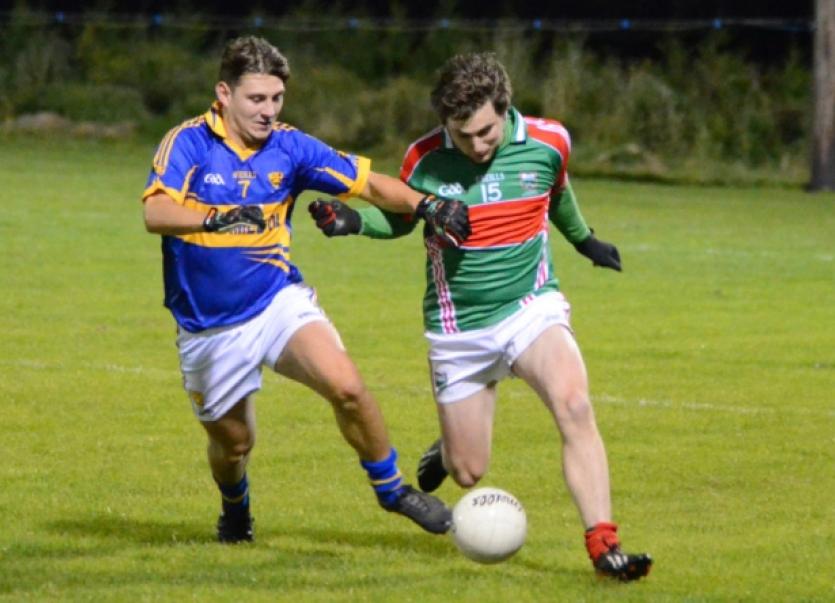 Eddie Connolly’s memory was honoured in the best way possible by his Loughmore/Castleiney team mates when, in their first game since his death just six days earlier, they proved too strong for Kilsheelan/Kilcash in the County SFC quarter final at Littleton on Wednesday night last, winning 1-12 to 1-8.

Eddie Connolly’s memory was honoured in the best way possible by his Loughmore/Castleiney team mates when, in their first game since his death just six days earlier, they proved too strong for Kilsheelan/Kilcash in the County SFC quarter final at Littleton on Wednesday night last, winning 1-12 to 1-8.

He would have relished the commitment, drive and passion that saw the holders reach another semi-final with a four point win over the South champions who saw their hopes of a county title evaporate under the Littleton lights.

Both teams and spectators stood for a minute’s silence before the game in Eddie Connolly’s memory and at half time there was a ‘re-enactment’ of the famed Effin Eddie u-21 game between Aherlow and Nenagh over twenty years ago with proceeds from the collection going to the Eddie Connolly Fund.

Loughmore have also retired Eddie’s No. 6 jersey with centreback Ciaran McGrath lining out with No. 31 on his back.

But on the field it was the same Loughmore, a club renowned for its backs-to-the-ball attitude that makes them such serious opponents. They totally bossed a lacklustre Kilsheelan in the first half, after which they led 1-6 to 0-3. They had raced into a 0-3 to no score lead after nine minutes, with points from a Liam McGrath 45, Aidan McGrath following a super pass from Liam McGrth into space, and a James Egan free following a foul on Evan Sweeney, before Kilsheelan had even settled.

County minor Mark Keogh hit a great opening point for the South champions in the 12th minute following good work from Adrian Walsh and Bill Maher, but it didn’t spark a recovery as Loughmore hit back within thirty seconds with a cracking goal from Cian Hennessy, who rounded Shane Prendrgast and hit the net from a tight angle.

Kilsheelan had it back to a three point deficit midway through the half with scores from another county minor Brendan Martin, and Paul Denn, but they just couldn’t reproduce their South final form and saw Loughmore hit three points without reply up to the break - a superb score from Liam McGrath, an Egan free and a Cian Hennessy point.

Kilsheelan had their chances but saw goalkeeper Evan Comerford hit a 45 wide, Adrian Walsh hit a free wide and Paul Maher was wide from play.

However the second half started much brighter for Kilsheelan. Brendan Martin kicked a great point from a tight angle in the opening minute and although Joseph Nyland replied almost immediately, the South side got the break it needed five minutes in when Loughmore keeper Dominic Brennan made a super save from Adrian Walsh but Paul Maher was following up to tap the rebound to the net.

When Comerford pointed a free from a tight angle five minutes later to make it 1-7 to 1-5, Kilsheelan were near enough if good enough.

But from there to the end the lead fluctuated between two, three and four points with Loughmore just doing enough to keep their noses in front.

Midfield was proving a key battleground with Kilsheelan’s Eoghan Ryan and Loughmore’s Noel McGrath driving their sides on. At times the action became too much of a battle with a series of flashpoints involving too many players and referee Paddy Russell was quite lenient to show nothing more than yellow cards throughout the game.

The final quarter was dominated by the scoring of Evan Comerford and James Egan - the Kilsheelan keeper pointing three frees and Egan hitting four points for Loughmore, two of them from play that gave huge lifts to his side at vital times. Their last score was a perfect example of possession football as they brought the ball the length of the field with sharp passing before it was finished by the outstanding Liam McGrath.

A concern for Kilsheelan - and an obvious contributory factor to their defeat - is that Brendan Martin’s point in the first minute of the second half half was their last point from play and Paul Maher’s goal their last score from play.

Maybe Saturday’s South intermediate hurling final was on their minds but this wasn’t Kilsheelan at their best. The normally fluid attack met huge resistance in the Loughmore defence and they struggled to break it down. Eoghan Ryan, Bill and Paul Maher and Brendan Martin couldn’t be faulted for effort but this proved to be their biggest test of the year to date.

With no hurling distractions, Loughmore hit the ground running in search of three-in-a-row and on this form it will take a good team to stop them. The mental strength to perform so well after such a traumatic week for the club spoke volumes. They defended brilliantly and in players such as James Egan, Liam McGrath and Cian Hennessy they had the artillery upfront to punish Kilsheelan.