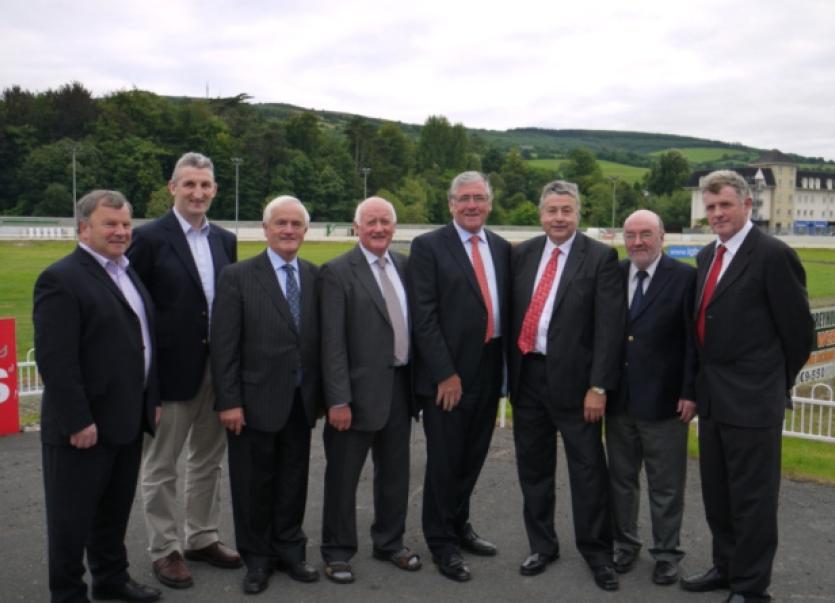 Skywalker Farloe lit up the Suirside track on Sunday with a sizzling run in the opening heat of the second round of the Track Supporters Club A1/A2 550 Stake.

Skywalker Farloe lit up the Suirside track on Sunday with a sizzling run in the opening heat of the second round of the Track Supporters Club A1/A2 550 Stake.

He stopped the clock in a brilliant 29.65 just five spots outside the track record set by Cabra Buck in January last.

The performance is put in perspective by the fact that just twenty-four hours earlier Cabra Buck took the second semi-final of the Irish Derby from trap to line in 29.83 to stamp himself as the leading candidate for outright honours in next Saturday’s final.

That Derby run was keenly viewed at the Davis Road venue on Saturday by a gathering who revelled not alone in the success of Cabra Buck but in the achievement of his trainer Graham Holland in chalking up five winners in Shelbourne on one of the big nights of the year.

On Sunday, although Holland was again in the winner’s enclosure, it was Frances O’Donnell who captured the limelight as star of the show Skywalker Farloe was the middle leg of a superb hat-trick for the very popular Killenaule handler.

Now owned outright by long time patron of the O’Donnell kennel Ray Patterson, Skywalker Farloe tracked Vito Wal on the back straight before challenging at the third bend and surging clear to leave that rival six and a half lengths adrift at the line with An Charraig and Papa Smurf the other qualifiers for next Sunday’s semi-finals.

O’Donnell whose Mahogany Boy had just won The Sporting Press A2 525 in 28.81 went on to make it three in a row when Refuge Of Sinner, also owned by Ray Patterson took the second heat of the big stake after a great battle with Lughill John.

Southern Oaks winner the admirable Gurrane Princess was superb in making all the running to take the third heat in 29.94 and in a tremendous climax to a wonderful evening Brogan Henry clocked a smashing 28.58 to take the concluding Red Mills Open 525 and complete a fantastic sequence of four AA0 performances on the night.

Vancouver Conor got the locals off to a fine start with a career best performance that saw him make all to defeat Amazing Avril by two and a half lengths with odds-on favourite Riverside Grace a big disappointment back in fifth place.

Riverside Cashen trained by Graham Holland for the Bandon based Between The Three Syndicate made all the running but was all out to hold the strong late lunge of Dan The Man by a neck in a very fast 16.12.

Express Liberty was very fast away in the black jacket and saw off all rivals before taking the spoils by a length and a half from Ruby Rouge in a very useful 28.94.

Captains Wish headed the market but had to be satisfied with third spot three and a half lengths in arrears of the impressive winner owned and trained by Michael Dalton.

Express Alcazar headed the betting in bidding for a quick Dalton double but found one too good in the shape of market rival Brae Lane which made all the running to score by two lengths for owner/trainer Niall Dunne.

Brae Lane clocked a career best 28.91 in gaining her second win whilst the runner-up and Chetwynd Lad which ran a career best in third place should soon be back in the winner’s enclosure.

Minor Friend was first to show but the 5/4 joint market leader and great local favourite Mahogany Boy was soon in front and cleared the opening bend on the outside followed by Affane Scholar.

The latter threw down a strong challenge on the run for home but Mahogany Boy, owned by The Rowan Tree Syndicate, held on by half a length with the other joint favourite Riverside Charm nearest at the finish in third place.

Refuge of Sinner was a 1/2 chance to complete the O’Donnell treble but was all out to hold off the strong run of railer Lughill John which ran the best race of his short career in failing by half a length in 30.01

Rockchase Bullet ran his best race for some time in finishing two lengths back in third and Jampot Jim took the remaining qualifying place.

The Patrick Guilfoyle trained impressive first round winner Magical Emma was an absentee having changed hands.

The brilliant bitch Gurrane Princess enjoys a 50% strike rate for Patrick Guilfoyle and proud Kilmallock owner Mary Walsh and she justified 6/4 favouritism with a cracking trap to line performance which stopped the clock in a career best 29.94.

Shunters Gizmo was the winner’s nearest rival all the way and Jim Scully’s charge stayed on in fine style to be just two lengths back at the finish with Carrigoon Ash and Velvet All Jam the other qualifiers.

This looked a cracking contest and Brogan Henry was favourite at 6/4 with Ardrahan Zebo seeking an O’Donnell four-timer well supported at 2/1 and they finished in that order.

Brogan Henry who loves Clonmel and whose previous runs at the track included winning clocks of 28.51 and 28.61 ran right up to his best by leading at the opening bend

and scorching clear to clock a brilliant 28.58 and bring a wonderful evening’s racing to a great climax.

Spindles Dream, a 6/4 favourite which came in as a reserve in trap three, posted the top run of the session in taking the Suirside Restaurant S1/S2 300 in an open class 16.36.

Trained by Dermot Warren for owner Kieran O’Brien from Turners Cross in Cork, this daughter of Royal Impact impressed in leading at the opening turn before surging clear to defeat Unknown Tornado and Sleek Ace by two and a half lengths and half a length.

Golden trainer Graham Holland is always worth following at his local venue and he once again delivered the goods when completing a fine double with the odds-on favourites Riverside Tom and Riverside Swift both sons of Leeview Jet.

The outsider of the field Mulberry Ace made all the running in the orange jacket. Always in control, the Ace Hi Rumble bitch stayed on in fine style to take the spoils by two lengths from the staying Aherlow Sterling and provide delighted Mitchelstown owner/trainer William Barrett with an overdue success, the second of her career.

Mulberry Ace stopped the clock in a career best 29.86.

Toddy Star was all the rage but the hugely experienced Soldier Lassie, a 5/2 chance dropped in class, ran on best to get her head in front near the line and score by a length from the favourite and Fifth Gear in a messy event.

Riverside Tom at 4/6 made all the running in the orange jacket to take the first leg of the Graham Holland double. Having his first outing, the winner showed plenty of pace and stormed to an eight and a half length success over Copper Lodge which had suffered a rough passage on the run-up. The time was a useful 29.28 and the owners are the Athassel Abbey based R-T and C Syndicate.

Funcheon Kudos, narrowly beaten on his debut last month headed the market but was baulked on the run up and never showed as Great Gale broke well on the outside and made all the running for owner/trainer Patrick Ryan.

Riverside Belle bidding for a quick double for the successful connections in the previous race was also in the wars but ran on to take second place three lengths adrift of the 29.65 winner.

led off the second turn and James Duggan’s charge stayed on well to defeat the strong finishing Monroe Henry by a length and a half in 29.51. The Head Bound bitch was gaining her second career victory having opened her account at odds of 11/1 in Harolds Cross in July.

Leci Larkin was a warm order at 4/7 and looked a winner when taking over from Phanters Express on the back straight. The latter had other ideas, however, and came with a renewed challenge to take the spoils by a length and a half from his rival in 29.68.