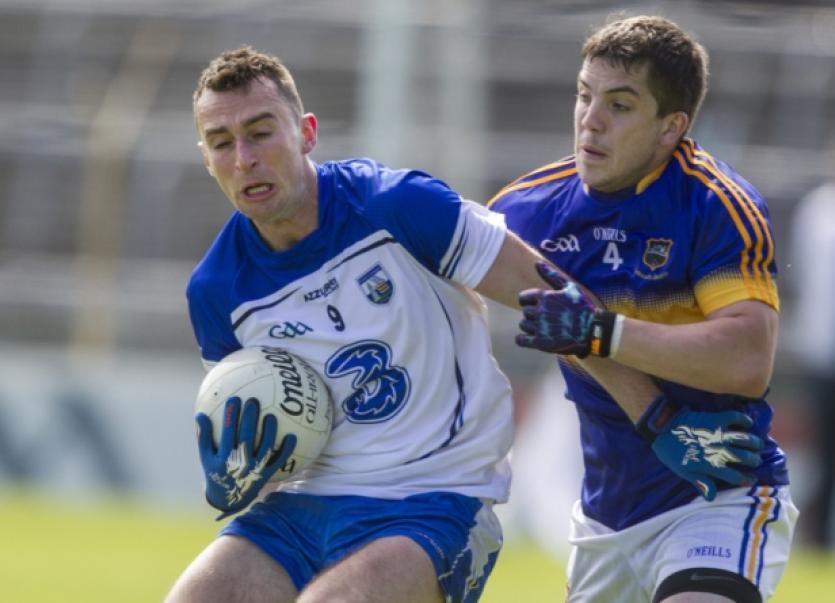 Where the footballers have gone let’s hope the hurlers can follow. Peter Creedon’s side crushed Waterford to set up that provincial semi-final with All Ireland champions, Kerry, on Sunday week.

Where the footballers have gone let’s hope the hurlers can follow. Peter Creedon’s side crushed Waterford to set up that provincial semi-final with All Ireland champions, Kerry, on Sunday week.

The football profile of the county has rarely been higher even though a paltry attendance of just over sixteen hundred paid cash to watch last Sunday’s lopsided event. The odds in advance had Tipperary listed at a prohibitive 1/10 and the bookies clearly got it right. They were right too about Dublin, listed at 1/200, on a weekend where runaway wins did little to enhance the football championship.

Tipperary’s reputation with the big ball has been growing and nowadays you’ll regularly hear national pundits making generous reference to the county’s efforts. The minor All Ireland win of 2011 is an obvious reference point and the near miss by the U21s recently has further added to the narrative.

In fairness the growing reputation isn’t built on any one season or one grade. At underage level the county regularly holds its own against Cork and Kerry nowadays. The minors have been in six of the last ten Munster finals, doing the double in ’11 and ’12. By contrast the minor hurlers of the county have contested just five of the last ten provincial finals, though also winning twice in ’07 and ’12.

At U21 level you could make a very similar comparison.

At senior level, however, the football story is a bit patchier. Getting to the last twelve via the qualifiers last year was noteworthy but they still await a major breakthrough where they take down one of the top contenders. The shadows of Cork and Kerry still loom large in Munster and until a big scalp is taken the team will continue to reside in that zone of gallant losers. Thus the importance of Sunday week’s game.

In all of this of course there is a major challenge for the football fraternity. Other counties have had their periods of promise only to see them fade. Clare’s Munster win of 1992 was thought to herald a new era for football in the Banner but ultimately was something of a false dawn. Limerick too had their period of promise in the early years of this century but failed to take a Munster title and eventually that phase also folded.

In fairness Tipperary’s upswing is more broadly based than either Clare’s or Limerick’s though ultimately it will be the progress of the seniors that will really matter. And in that regard they’re still some distance off the top level. 2020 will be the centenary of Tipperary’s last All Ireland senior football win and the romantics have been dreaming of a return to the top by that date. Optimism is admirable - but you need some realism too.

Anyway, good luck to them on Sunday week. The injury to Colin O’Riordan is an obvious worry so hopefully he’ll be able to face the Kingdom. Incidentally I’ve been told - with a certain hint of triumphalism, let me say - that O’Riordan opting for football represents a new dawn in Tipperary.

It is nothing of the sort. Colin is an exceptional football talent but not a natural hurler. To thrive in hurling at senior inter-county level he would need a total focus on the game and that would be unfair to ask of such a football prodigy. In the circumstances he made the correct call much as I’d like to see him giving hurling a real shot.

O’Riordan aside, that clash of codes is ultimately an area where the footballers will struggle in Tipperary just as the hurlers do in Dublin. The dual player is gone from senior level and increasingly players will have to choose one game at a younger age. That’s a harsh reality, one that countrywide hurts hurling much more than football.

Earlier this year Tommy Toomey urged players to play both games. Now, if Tommy was managing the Kerry U21 footballers would he be urging them to play hurling? Of course not. There’s the rub. The minority sport will always encourage dual involvement because it’s in its interest but ultimately talented players will opt for the game with the highest profile. That’s what Ciaran Kilkenny did in Dublin and Tomas Brady and a string of others. It’s also what Nicky English and John Leahy and Declan Ryan and Brendan Cummins did in Tipperary. Reality bites.

Anyway our senior hurlers are busy beavering away in the background. I’ve never known such a prolonged gap between league and championship – it seems interminable. The team played Wexford at Morris Park and Offaly at Birr recently, winning both, though final scores are usually irrelevant in these exercises where every panelist sees action. The list of injuries seems to be healing though at this stage Cathal Barrett must be a very unlikely starter against Limerick. Denis Maher, Mickey Cahill, James Barry, John McGrath, Paudie Maher, Kieran Bergin and company all seem to be back in action. Lar is back too, strutting his stuff – who needs winter training!

I was very underwhelmed by Dublin and Galway on Sunday last. It just never seemed to pick up championship intensity with neither side able to go for the jugular. Dublin will be the more disappointed of the two. Once again they failed to close out a game that was so winnable. I suspect that hand injury was a major factor in Joe Canning’s lack of impact. Galway need him clicking and if it happens on Saturday it may just be the difference.

Cork and Waterford is an intriguing prospect. Injuries are part of the narrative on both sides so it’s difficult to see how it balances out. A defeat would be more damaging for Cork and perhaps that will be the incentive to push them over the line.

Meanwhile our club championship continues to take shape with all four divisions lining up for the latter stages. In the West Cappawhite are out following defeat at the weekend to Kickhams.

It was a strange game played in difficult conditions at Clonoulty on Saturday last. Fresh from their mauling the previous week Cappawhite were short a few players and yet Kickhams were scrambling to hold them out by the end.

The first half was indecisive but Kickhams seemed to be cruising in the second period thanks mainly to a few give-away goals which Brendan Ryan gratefully accepted for the Dundrum club. The margin went into double digits but then Jerry O’Neill hit a hat-trick of goals for the Cappawhite lads – two from frees - and suddenly it all came down to a jittery finish.

Kickhams held two points of their lead but it was a wobbly conclusion. They now face hot-favourites Clonoulty in a semi-final with the winner taking on Eire Og in the decider.

Bar an extraordinary turn-around it looks like another Clonoulty/Annacarty final in the West - unless Kickhams can produce something special against their traditional nemesis.

In the North division the headline story at the weekend was Templederry’s defeat of Nenagh Eire Og. That means that reigning champions, Nenagh, are out of the North championship. It was their second loss this year to Templederry, a club that has never won the division but looks well placed to make history this year.

Templederry are joined in the North quarter-finals by Portroe, Silvermines, Kildangan, Lorrha, Ballina and Roscrea with Toomevara and Kilruane having to play-off for the final slot. Moneygall, Burgess and Borrisokane are finished senior hurling for the year and Borrisoleigh need Drom/Inch to win the Mid in order to resurrect their season. Wouldn’t it be a deep irony if Drom’s success rescued Borrisoleigh’s season given the raw rivalry between the clubs?

Senior hurling in the county is becoming geographically lopsided with the North hosting fourteen teams this year. Indeed Newport is fancied to soon make it fifteen given their present form in the intermediate grade.