Huge challenge ahead for Tipp against Laois 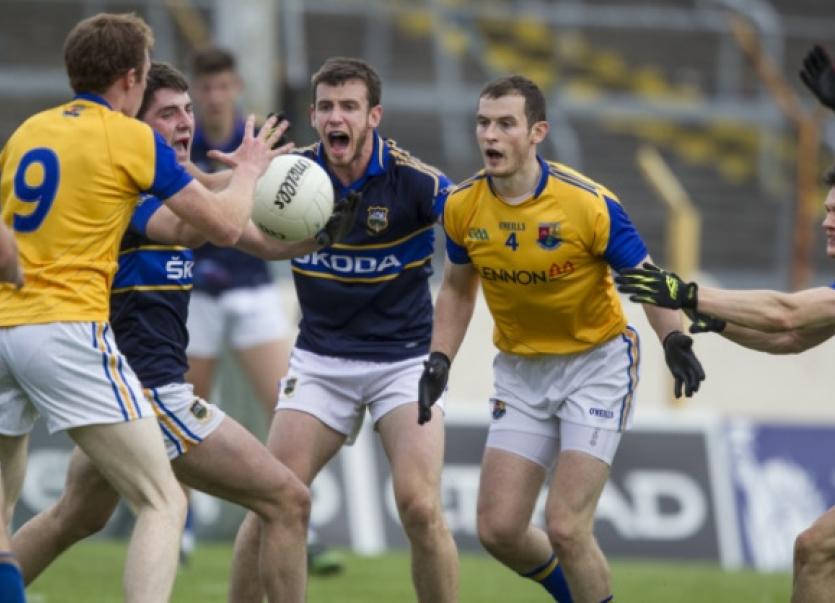 Tipperary senior footballers are back in action again this Saturday evening in Portlaoise in Round 3 of the All-Ireland SFC Qualifiers.

Tipperary senior footballers are back in action again this Saturday evening in Portlaoise in Round 3 of the All-Ireland SFC Qualifiers.

The reward for Tipperary for their impressive win over Longford last Saturday night is an away trip to O’Moore Park to face Division 2 side Laois. Throw-in for the football segment of the double-header is at 4.45 pm with the Tipperary v Offaly hurling game to follow at 7 o’clock.

Laois, under the management of the well-travelled footballing coach Tomás O Flaharta, will be a much sterner test than Longford proved to be in Semple Stadium.

According to Tipperary team trainer and Clonmel based school principal Michael O’Loughlin “Laois are at a higher level than anything we’ve met from Division 3 or Division 4 so far this year. They are a Division 2 side and they held their place in Division 2. They ran Dublin close in the Leinster championship and gave them a far better game of it than Wexford did. They were with Dublin well in to the second half before Dublin stepped up another gear and they ran out of steam.”

“There is no doubt we will have to step up another gear to compete with Laois. They play a different style of football to what Longford brought to Thurles. We don’t expect them to be as negative as Longford were. They play a nice open style of game. Plus they are at home and they would be fancied by many,” Michael added.

The Laois manager is West Kerry native Tomás O Flaharta who served with Westmeath under Paidi O Sé when the midlanders won their only Leinster senior football title in 2004. O Flaharta took over the reins at Westmeath after Paidi and has since had stints as Galway boss and now at the helm of the O’Moore County. No doubt, Laois have one of the most experienced managers in the country in charge.

“Laois are a top quality side with some excellent players. In particular Donie Kingston who was outstanding against Dublin, John O’Loughlin who is a workhorse around midfield and Ross Munnelly who is a top class forward,” Michael pointed out.

He went on to add also that “home advantage is proving to be a huge advantage in the qualifiers, it was for us against Longford, Limerick against Antrim also. It means a lot to the home team.”

Laois bucked that trend on Sunday last though when beating Wexford in Wexford Park by the narrowest of margins 0-18 to 0-17, rallying late to do so. In the earlier qualifying round they did have home advantage, again winning by the bare minimum against Fermanagh by 1-19 to 2-15. So there’s definitely a hardened and never-say-die vein running through the team.

But Tipperary are in a good place and they are now in “bonus territory” in a year that has seen them make great improvements in results and in performances, not least a totally unexpected 17 points mauling of Longford last weekend.

Michael O’Loughlin, reflecting on that win and asked was he surprised by it.

“Absolutely, we expected a very tight game. But we had our work done and we could pick a team to suit the way we thought Longford would play after their win over Derry. After the early goal conceded we thought they would open up and we were surprised that they didn’t. We had a game plan and we were always going to be patient against them. Peter Acheson’s goal killed off the game.”

“We are hopeful going to Portlaoise. We know it is going to be a sterner test a much bigger challenge than last week. It’s a good pitch in O’Moore Park and it should be a good crowd too,” he continued.

“The fact that it’s a double header is okay too and hopefully there will be a big crowd there like in Thurles. The boys were encouraged by the crowd the other night and they were delighted with the reception walking off Semple Stadium. It gave them a great lift.”

Referring to the aftermath of the game Michael went on to say that “there is a great positivity about the team and around the county following the win on Saturday. A lot of people were impressed with what they saw and the type of football that Tipp played.”

As the rounds progress naturally the competition intensifies but parallel to that so too do the rewards of progressing.

For Peter Creedon’s side, should they be able to produce their best performance on Saturday and overcome Laois - which all acknowledge will be a huge ask - the opponents in Round 4 of the qualifiers would be the runners-up in next Sunday’s Connacht final between Galway and Mayo. Because Tipperary have already played Cork in the Munster championhip they cannot meet ‘The Rebels’ again in Round 4.

According to O’Loughlin the “big carrot for Saturday’s Round 4 game is that the winners would be just 70 minutes of football away from a quarter-final and a game in Croke Park,” he concluded.

It’s a mammoth task on Saturday for Tipp but if they can play to the levels they did against Cork and Longford they won’t be too far off.