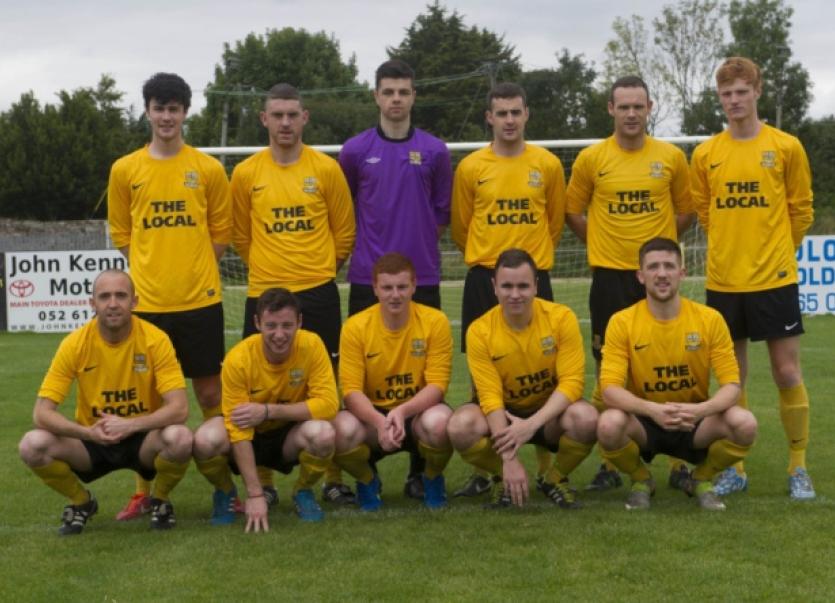 After putting a new management team in place before the start of the season, Cashel Town had high expectations of making a more positive impression in the Premier league this season and they got it off to a great start with an excellent home win against Peake Villa.

It was a tight affair however for most of the first half with little in the way of clear cut chances, the best being when the home side hit the crossbar after 12 minutes after Jonathan Kennedy headed in from a corner.

Reserve keeper Tommy Gayson also had to be sharp to keep out a good shot on the half hour, but right on the stroke of half time Cashel took the lead when great work by Paul Hoare slipped Ger Browne through on goal and he finished with a great shot.

Immediately after the restart Browne doubled his and Cashel’s lead after being put clear by Eoin Byrne, leaving the visitors with the proverbial hill to climb to get back into the game. Byrne and Browne combined again 20 minutes from the end as Browne capped a man of the match performance with a hat trick.

To their credit though, the Thurles side continued to try to get back into the game, and got a goal back three minutes later when Eoin Dwyer played Darren Grimes in to score.

However unlike in many games in recent years, Cashel showed a harder core after this, and gave Villa no more chances to make the finish any way doubtful, producing two more goals near the end through Eoin Byrnes and Mick Ryan to give them a deserved win and a lot of hope going forward into the rest of the season ahead.

Bansha Celtic returned to Premier League football on Sunday last and couldn’t have asked for a tougher proposition than a game against last year’s unbeaten champions Clonmel Celtic. They acquitted themselves well for the first 45 minutes of the game, but a lack of discipline in a short spell during the second period, extinguished any chance of them getting anything from a game that they had provided such good entertainment in during the first period.

The visitors came out all guns blazing and went one up in the fifth minute when a cross from their left found Ross Condon who slotted home from eight yards out.

Both teams created chances in the rest of the half but none were taken. Bansha were again caught napping at the start of the second half and went two down in the 50th minute through Seanie O’Hara who got on to a ball headed back across the six yard box.

Then came the real game changers, when first on the hour mark Bansha’s Darren McGrath stumbled when rounding the keeper and a penalty was awarded along with the Celtic keeper being sent to the line, but the resulting penalty was missed.

Four minutes later a Bansha Celtic forward beat the off side trap and the stand in keeper came rushing out to intercept, collided with the home player, only for the Bansha player see red for dangerous play.

Celtic took advantage of the extra room on the pitch with two quick goals from Ross Condan in the 68th and Seanie O’Hara in the 72th minutes.

Two more goals late one, a headed effort from Graham Doyle a free kick from O’Hara in injury time completed the scoring.

A Tony Scully header after only two minutes from a Richie Crowe cross after good work from David McGrath was the difference between these sides, in Bridge’s much anticipated return to Premier League football.

Chris O’Gorman came close for the visitors after twenty minutes when he outpaced the Town defence but shot wide. The home side had another good chance fifteen minutes before the end, when Ger Kennedy came close, but after a real tight battle Town were more than happy with the one goal victory to gain all three points.

Saints completely outclassed a very youthful Two Mile Borris at Cooke Park on Sunday Morning. Goals from Jimmy Carr, Darren Lynch and Colin Bargary gave the home side a three goal advantage within the first quarter of an hour, and after that another brace from Paul Breen and Carr again meant that this game was long over before the teams stopped for the break.

With the luxury of using their bench now, substitute Padraig Fogarty added two goals inside the first twenty minutes of the second period, and Darren Lynch completed his hat trick scoring two more along with a two from Richie Ryan and Joey Mulcahy to make this an absolute wretched day for the visitors.