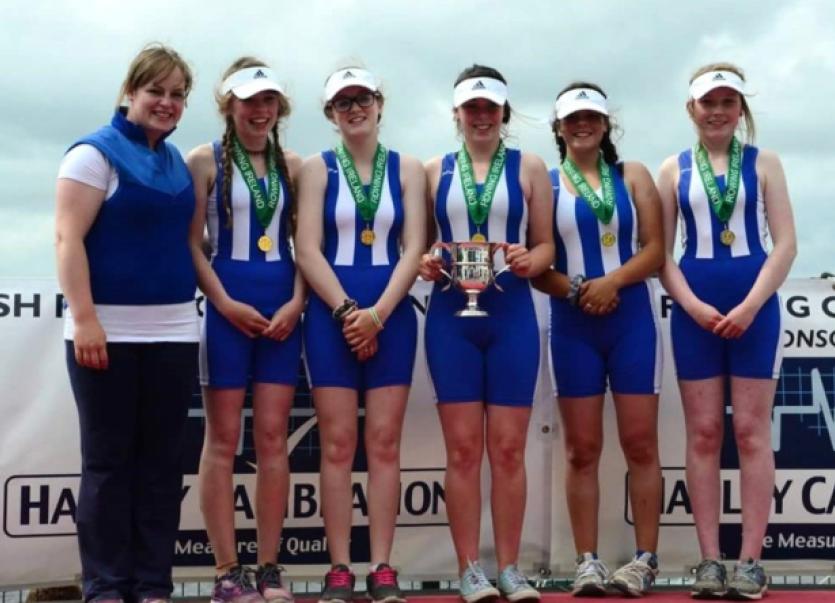 Clonmel Rowing Club has completed a very busy season with members having competed in 13 different Head of the River and Regattas around the country, ending with the National Rowing Championships in mid July. The crews did the Club proud with their competitive spirit, discipline and dedication.

Clonmel Rowing Club has completed a very busy season with members having competed in 13 different Head of the River and Regattas around the country, ending with the National Rowing Championships in mid July. The crews did the Club proud with their competitive spirit, discipline and dedication.

Daire Lynch won silver in the final having come through two earlier tough heats of the Mens Club Single Scull event, an impressive achievement as he was competing above his age group.

Matt Dundon showed how all his hard work over the year has paid dividends, pacing himself over two heats and then winning a bronze medal in the final of the Mens Junior 16 Single Scull in a measured and determined performance. This was a very keen contest, with a total of 43 scullers entered in the event.

Matt also rowed in the Mens Junior 16 coxed quad with Andrew Butler, James O’Donnell, Jason McKenna and Sarah Lonergan (cox). In a very competitive event they battled hard against 16 crews to come third in the final.

The Mens Club Four crew of Alan Prendergast, Alex Chadfield, Sean Lonergan, Daire Lynch and Mark Bates (cox), who only formed the crew five weeks prior to Champs, rowed bravely in keenly contested heats against 18 other crews to reach the final. Alan Prendergast also competed in the Mens Senior Single Scull, and reached the final.

All the rowers impressed with their determination at the Champs, which had a total of almost 900 crews entered over the event – which makes the medals won by Clonmel members all the more impressive. The rowers were supported each day by their families, many of whom also helped with supervision of overnight stays in Cork. Thanks go to parents who gave their time (some for more than one night); Champs weekend is more special for juniors when they stay overnight and experience a taste of student life! Thanks also to parents and members who helped at “base camp”, keeping juniors and parents alike fed and watered (thank you to Pat Whelan for sponsoring some of the very popular burgers!!)

The Club celebrated its 145th anniversary this year, an event which was marked by a photographic exhibition at the County Museum in November. The display made clear the rich history of the Club and how closely it is linked to the people of Clonmel. The Suir Dragon Paddlers also had an eventful year, with three of their members representing Ireland on the national squad in an international event in Florida.

The Club once again had a junior member on the Irish National Squad that competed in Strathclyde, Scotland for the Home International Regatta – congratulations to Sean Lonergan on his achievement with the Mens Junior 18 quad.

Sincere thanks to the dedicated coaches without whom the rowers, both junior and adult, would not achieve the success they have over the season - Jimmy Fennessy (Hon President), Pat Kinsella (Captain), Ailish Redmond and Susan Allen (Vice Captain). Thanks also to Committee members Branwen Kelly (Secretary), Tino Fiuza Castineira, Helen MhicChonmara, Kevin Dundon, Tom Fennessey, Matt and Judy McKenna, Dermot Dougan and Dermot Power. Without the work of the Committee, as well as parents who gave their time to fundraising activities, the club would not have been able to purchase the new equipment so badly needed, nor make the vital repairs to the Clubhouse to keep it maintained.

Training for the 2015/16 season will commence at 10am on Saturday, September 5. Anybody who is interested in or curious about rowing is welcome to come along to the Club in Irishtown (entrance opposite Gaelscoil, beside Late Late Food Store). Rowing is often perfectly suited to those who don’t enjoy contact sports. Rowing exercises all the major muscle groups, builds stamina and cardio vascular health, but is a low impact and low injury sport. Junior members must be minimum age 12; adult members have no age restriction!!

Please note that the Annual General Meeting will take place on Wednesday, September 16 at 7.30pm in the Clubhouse. All are welcome to attend.