‘Indigojack’ was the only dog that mattered in sparkling time of 28.49 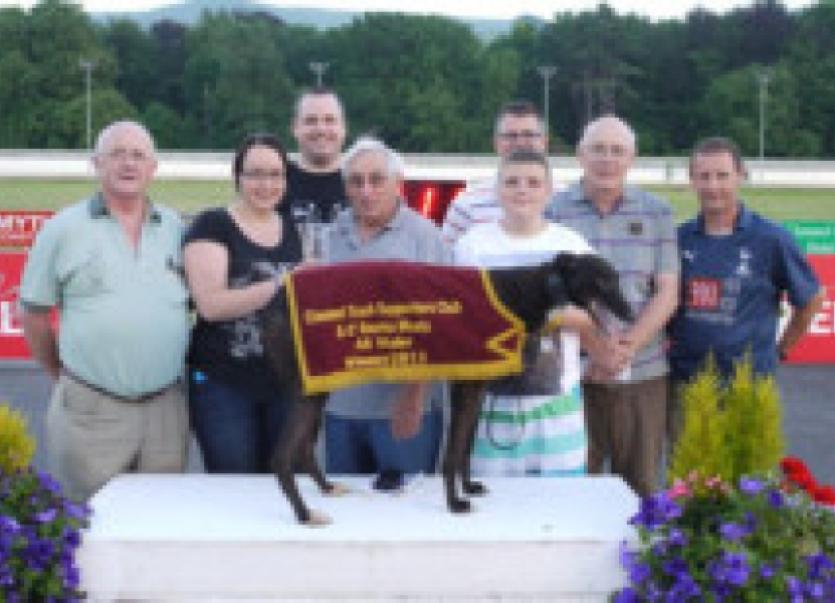 In spite of a damp evening by the banks of the Suir on Sunday, patrons enjoyed a fine card that produced great racing highlighted by a tremendous run from the 3/1 chance Indigojack in the final of the 3,000 euro to the winner Surehaul/Mercedes/B.I.F. Open Unraced Stake.

In spite of a damp evening by the banks of the Suir on Sunday, patrons enjoyed a fine card that produced great racing highlighted by a tremendous run from the 3/1 chance Indigojack in the final of the 3,000 euro to the winner Surehaul/Mercedes/B.I.F. Open Unraced Stake.

With Lughill Edward an absentee and replaced in the red jacket by kennelmate and sibling Lughill John, the layers returned the latter and Soviet Clooney as the 7/4 joint favourites.

In the final analysis, however, Indigojack was the only greyhound that mattered as he flew from trap three to lead from Soviet Clooney and Lughill Dano and piled on the pressure to build up a tidy advantage that he never looked like losing.

Soviet Clooney battled on gallantly but could get no nearer that two lengths where it mattered whilst the slow starting Lughill John came home in fine style on the rails to take the third spot three and a half lengths adrift of the principals.

The classy nature of this latest renewal of the prestigious stake was underlined when the superb clock of 28.49 was revealed. The event proved a great success for trainer Darragh Morrissey and Rathfarnham owners Larry and Jack O’Shea who were also represented in the final by Jacksabullet, a litter-brother of the winner. Both are sons of Head Bound and Blasket Music and the latter had produced an earlier winner in the shape of another son Gurtlug Fantasy from her Jul’10 litter sired by Blasket Music in the second semi-final of the A3 Stake.

Other highlights of the meeting included a splendid treble for trainer Graham Holland and a brilliant sprint run from Willie Barry’s Movealong Black (Head Bound-Movealong Sutty) who dipped under the magic 16.00 mark when taking the open sprint by seven lengths.

Race 1 (A4) – Riverside Havana, easy to back at 2/1, recovered from a slow start to lead at the second bend and stay on resolutely to account for Mountaylor Night by two lengths in 29.63. The winner was breaking her maiden at the third attempt and was initiating a splendid treble on the night for trainer Graham Holland. She is a daughter of Tyrur Lee and Tyrur Alyssa owned in Athassel Abbey by The R-T- and C-Syndicate.

Race 2 (Open 300) – The magic16.00 mark is not often broken at the venue and Willie Barry’s odds-on Movealong Black (Head Bound-Movealong Sutty) joined the group who have accomplished the feat with a brilliant trap to line success. The very impressive winner put his rivals to the sword when romping to a seven length win over Rathorpe Scudo in 15.97 with Watch Out Tom two lengths back in third place.

Sponsored by John O’Sullivan and Richie Maher the heats produced useful performances from River Gem and Gurtlug Fantasy. The former took the first leg by breaking in front and staying on well to gain his second victory in a career best 29.11. Pat O’Dwyer owns the son of Hondo Black and River Dancer which crossed the line with a length in hand of the fast finishing Tivoli Becky with Elios Shiva seven lengths away in third place.

The second semi-final always rested between 3/1 chance Gurtlug Fantasy and recent A5 stake winner Bate the Sweets who dominated the contest from trap rise. Bate the Sweets led his rival to the third bend and Gurtlug Fantasy quickened clear from the last to score by two lengths in 29.09 to equal his previous best run and gain his third success.

Next Exchapter took the third qualifying place a just a short head in arrears of the principals.

Recent impressive sprint winner Mustang Messi was an odds-on chance to follow up for owner Sean Bourke and trainer Graham Holland in the first semi and the son of Ballymac Under and Jodu Fame duly obliged by taking up the running at the second bend and although Watch Out Jerry got his head in front on the back straight Mustang Messi quickly re-asserted and stayed on to score by two lengths with the pair finishing some seven and ahalf lengths clear of the third home An Charraig in 29.25.

The 4/1 outsider Skeough Jim which paid odds of over 20/1 on the tote gave the performance of his career by starting and staying in style to record a smashing 28.98 which took twenty-five spots off his previous best clock. The son of Top Savings came home two lengths clear of the odds-on Coolard Chief with Cheerful Lil a length and a half back in third place.

Express Nation headed the market in the first leg but was baulked at the opening bend and had to be satisfied with third place in an event which was dominated by the 4/1 outsiders Brunswick Jenny and Stag Park Wood. The latter led on the run up and was closely pursued by his rival on the back straight. Brunswick Jenny edged in front at the penultimate turn and in a great battle to the line the local runner just prevailed by the narrowest of margins.

Graham Holland completed his treble in great style in the second semi when the even money favourite Billis Adare (Hondo Black-Rising Smoke) again showed her liking for the track with a fluent three length success over Scotts Paddy in a smashing career best 29.97. The well supported Oakfield Grundy finished four and a half length back in third place.

On Thursday night, the semi-finals of three stakes, the finals of which will be run on next Sunday’s major benefit meeting for the Christian Flannery Foundation Fund, formed the backbone of the card and the top performance of the session was posted by the Owen McKenna trained Vito Wal (Droopys Scolari-Vito Maeve) which dipped under the 29 second mark when holding the strong challenge of his more fancied kennelmate Vanrooney by a length in the first semi-final of the A3 Stake sponsored by John Nallen of Hotel Minella.

Johnny The Fool was an odds-on chance in the opener but only beat one home as Early Style made a quick exit from trap four and had his rivals in trouble from the word go and held on to win from Miss McCann with Circus Molly third. The winner is a daughter of Blackstone and Knocknaquill Lil and is owned and trained in Poulmucka by Bridget Moloney.

Early Charmer, a comrade of the first winner, in the second semi was a 2/1 market leader to complete a quick Poulmucka double but had to be satisfied with third place. Coolbeggan Rebel set out to make all but was caught in the final strides by Innovate which got the verdict by the narrowest of margins. Innovate (Hondo Black-Greenane Misty) is trained by Pat O’Connell for local owner Tom Joyce and her winning time was 29.63.

In the first semi the favourite Lughill Marie took a spectacular tumble in front of the stands and the 5/2 chance Loughteen Pixie led at the first bend before resolutely staying on to repel all challengers.

Rapid Rita headed the market in the second leg but was badly baulked at the first bend after a slow start. Dolcino Don (Kinloch Brae-Pookies Dubh) took up the running from Rockwell Johney round the opening turn and stayed on well to account for Holly’s Flyer which finished well to take second spot with Rockwell Johney the other qualifier for next Sunday’s final.

Owen McKenna held a big hand with the even money favourite Vanrooney and the 5/2 chance Vito Wal and the latter upset the odds by making all the running and just holding on to contain the power packed finish of his kennelmate by a length in a very useful 28.98. Brae Hill took third place some six lengths in arrears of the principals.

Fastest first round winner Monroe Rock was the shortest priced favourite of the evening at 4/7 for the second leg and the son of Ace Hi Rumble and Korellie landed the odds but only just in an exciting climax to the session. The favourite tackled the 4/1 outsider

Golden Jayjay on the approach to the final turn but having got his head in front was all out to contain a renewed challenge from the latter and a late flourish from Skip Maestro.

They finished in that order in 29.44 and the margins were half a length and a short head.