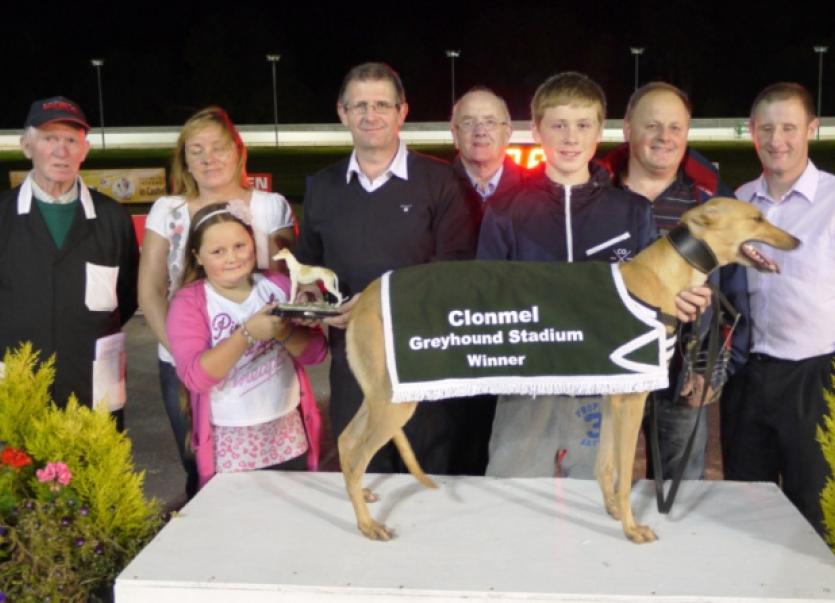 There was magic in the Suirside air on a very special evening at Clonmel Track on Sunday for the Organ family of Carrick-on-Suir, whose late father Sean was commemorated by the feature event of the session, The Sean Organ Memorial and Track Supporters A2/A3 Bitch Stake final, which carried a smashing winner’s prize of €3,450.

There was magic in the Suirside air on a very special evening at Clonmel Track on Sunday for the Organ family of Carrick-on-Suir, whose late father Sean was commemorated by the feature event of the session, The Sean Organ Memorial and Track Supporters A2/A3 Bitch Stake final, which carried a smashing winner’s prize of €3,450.

This has been an outstanding competition and it was fitting that it was won in a brilliant time by a rapidly improving young bitch Durrow Abbie, who left her rivals struggling in her wake.

Pippy, unbeaten in the event, went off the 2/1 favourite in an open market but it was the Wexford challenger Southest Suzie in the striped jacket that flew from trap six to lead Durrow Abbie and Churchtown Tip round the opening bend. Despite keeping a wide course “Suzie” enjoyed a good lead on the back straight but Durrow Abbie showed great pace to narrow the gap and take over on the inside as they rounded the penultimate bend. Both runners gave their all on the run to the line but Durrow Abbie was the stronger and she emerged a very impressive two length winner over a gallant rival.

The favourite Pippy was doing her best work at the finish to claim third place, two and-a-half lengths back. The winning clock of 28.56 was the fastest of the entire competition by eleven spots and the winner, a May ’11 daughter of Crash and Dunalley June, looks set for an exciting future. She is owned in Tullamore by The Uibh Fhaili Syndicate, whose members were in great voice on the night.

A little earlier the fourth race on the card, an A3 525, yielded the most popular success of the evening and it was cheered to the echo by members and supporters of the Organ family, whose late father Sean’s memory was later to be commemorated in the evening’s feature. Sean’s son Maurice was the trainer of 3/1 chance Popular Bubbles, owned by The Blue and Gold Syndicate of South Lodge, Carrick-on-Suir and when this son of Ace Hi Rumble and Molly Bloom hit the lid and rounded the opening bend clear of his rivals the crowd rose to him. Popular Bubbles was clear on the back straight but the cheering became a little subdued as Mountaylor Air reduced the gap approaching the final turn, only to reach a crescendo as Popular Bubbles asserted to score by three and-a-half lengths, with the third home Riverside Swift finishing some eight and-a-half lengths in arrears of the runner-up. It proved to be a magic moment enjoyed by all and a fitting outcome to a very special evening for the Organ family. Popular Bubbles clocked a career best 29.19 to break his maiden at the seventh attempt.

Kenmare Taylor was quickly away from trap three and led his rivals a merry dance. Early Style and Burtonport Pearl were the nearest challengers on the back straight, where Juno Doll was noted making good progress on the rails. This New Ross contender continued his steady run to take on the leader on the run to the line and got up in the final strides to take the spoils by a neck in a career best 29.13. Cloncunny Ace took the third spot three lengths adrift of the principals.

Pure Palomar was the outsider of the party but broke fast and had his rivals in trouble from trap rise. Riverside Grace gave chase for much of the trip and closed the gap all the way to the line but could not quite get to the leader, which held on gallantly by the narrowest of margins with Firston The Left three and-a-half lengths away in third. The winner recorded his fastest ever run in clocking 29.32 to gain his fifth win for owner/trainer John Duggan.

The sequence of exciting finishes continued with Christy’s Amber getting the verdict over longtime leader Ballyhone Shaw. The winner was continuing the successful run of Limerick owner/trainer Mary McNamara’s Westmead Hawk-Christys Diamond litter at the venue in recent weeks. Christy’s Amber clocked 30.51 in scoring by a neck, with Purple Minnie four and-a-half lengths back in third.

The very consistent Dan The Man got back on the winning trail with a career best performance that failed by just two spots to get inside the magic 16 second barrier. David Hickey’s admirable performer was headed from traps by Mahogany Boy but was soon in control and raced away to defeat that rival by two lengths, with Movealong Turbo nearest at the finish in third place.

Forrachmore returned to her best form with a sizzling trap to line run. Graham Holland’s seven time winner put her rivals to the sword with a very impressive display that stopped the clock in 28.83. Trumpers Lexi ran on to pip Christys Gold for the runner-up spot five lengths adrift of the winner, a daughter of Hades Rocket and Forest Joy owned in Athy by Michael Kealy.

Johnny’s Legacy justified favouritism in the best possible manner by running a career best 28.88 for Dungarvan enthusiast Tommy Caffrey. The son of Killahan Phanter took over from All in Fashion off the early bends and stayed on in great style to defeat that rival by two lengths. Christys Jade claimed third place some four and-a-half lengths behind the principals. The winner was gaining a fourth career win from ten starts for his proud connections.

Graham Holland completed a nice priced double when his 3/1 chance Gunite Basil led at the first bend before romping to a six length win over Scooby The Joker in a smashing 28.70. Haughty Oscar was the even money favourite but lost all chance in first bend trouble. The winner now boasts a great strike rate of eight wins from eighteen runs and his clock was only a spot outside his career best. He is owned cross-channel by The Wentworth Syndicate.

Run of the Week - The very impressive 28.56 success of Durrow Abbie in the Sean Organ Memorial Final.

One to Watch – Highview Blitz can strike again following her overdue Thursday success.

The 80th meeting of the year at the Davis Road venue was highlighted by a brilliant sprinting performance from the favourite Stanley’s Dream, which made all the running in the white jacket to come home three and-a-half lengths clear of his rivals in a smashing SS0 class 16.09. The son of Flying Stanley and Margaret’s Hill, who is proving a great servant to Cashel owner Thomas Barrett and trainer Niall Dunne, was gaining a seventh career win and has been runner-up eleven times from his twenty-seven runs. He was followed home by Tanners Cross and Dynamite Kid.

The honour of posting the fastest clock of the session over the standard distance fell to the Cashel-based Foley’s Bar Syndicate and trainer Ross Myles, whose well-backed even-money favourite Cant Tell Lucy took The Sporting Press A5 by a whopping nine lengths in 29.11.

Fagans Bellagio was easy in the market at 5/2 but romped to a facile six lengths success for his Cork connections. A winner on his debut but a disappointment on his second outing, the son of Droopys Scolari was in control from trap rise and having opened up a big lead from Hat Lady off the opening bends he showed no sign of stopping to come home unchallenged from Reggies Swan and Brunswick Sally in 29.66.

Another 5/2 chance, Elegant Woman got off the mark at the fourth time of asking by breaking fast and overcoming first bend trouble before surging away to score a four and-a-half length win over Suirview Lucy, which just held off a strong finish from an unlucky in running Foxrock by the narrowest margin. The winner clocked 29.66 in opening her account for Thurles enthusiast Laura Kennedy.

The odds-on Skywalker Candy created a good impression by running a fine first bend to gain command and leave her rivals floundering in her wake. Classy Zumo ran on to take the runner-up spot some six lengths in arrears of the winner.