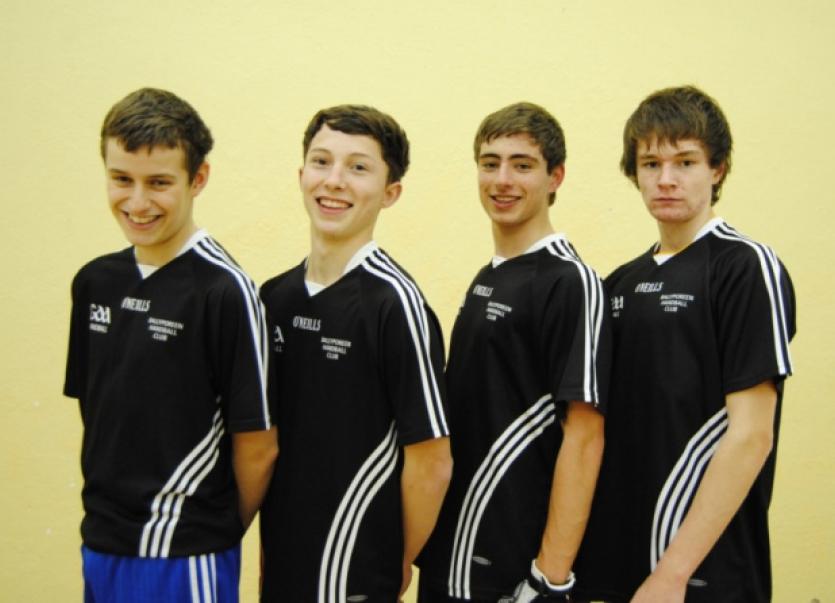 Ballyporeen Handball Club will be represented by seven players at the USHA Junior Nationals in California, USA, just after Christmas.

Ballyporeen Handball Club will be represented by seven players at the USHA Junior Nationals in California, USA, just after Christmas.

The seven youngsters, under the management of the experienced Pat Ryan, will be hoping to perform to the best of their ability against the game’s top players from the USA, Mexico, Canada and Ireland.

We include a brief penpicture of all who are travelling Stateside.

Pat will travel to the USA as team manager.

A great clubman, Pat has been involved with the Ballyporeen club all his life. He was also a top handballer winning many major honours in the game. His biggest success came in 2012 when he won the World 40/20 Golden Masters (B) singles title in Dublin.

Pat travelled to the Worlds in Portland, Oregon, in 2009, but this will be his first trip to the USHA Juniors.

Jason is one of the club’s top players and will take part in the USHA 19 and under competition in California.

Another top young handballer, John will take part in the 17 and under grade at Christmas.

John should do very well in both 40/20 and one-wall competitions in the USA.

Mikey is an outstanding young handballer with great skill and a large shot selection. His father, Enda, is the club’s chairman.

On his day Mikey has an excellent chance of doing well in the 40/20 competition.

Ceallach is another of our handballers with great potential. He also has two All-Irelands under his belt, winning in 2011 on the Tipp team at Feile na nGael and in 2012 and again with Tipperary in the U14 and U15 40/20 team competition.

Ceallach should do very well with an excellent chance in the one-wall competition.

A rising star, Jason will play in the 15 and under grade in America after Christmas.

Jason’s biggest win to date was at the 2012 World Handball Championships where he won the World 15 and under doubles 40/20 title with Daniel Hayes of Cashel.

All going well this tremendous handballer should do Ballyporeen and Tipperary proud in the 40/20 competition.

Upcoming handball star Adrian English will compete in the 15 and under category at Christmas in California. He also has two All-Ireland titles to his credit, in 2011 as part of the Ballyporeen team at Feile na nGael and then in 2012 with the successful Tipperary U14 and U54 40/20 team.

Adrian is an excellent young handballer with great court speed and a superb overhand shot making him a brilliant player.

He should do very well in both 40/20 and one-wall competitions.

Jack only took up the sport in late 2011 and his rapid rise in the sport has been unbelieveable, with honours at county, provincial and national level.

Possessing great speed and vision around the court, the Ballindangan man will represent Ballyporeen Handball Club with pride in the States and if he hits top form should do well in both 40/20 and one-wall competitions.