Tipp footballers defeat Laois to set up clash with Galway 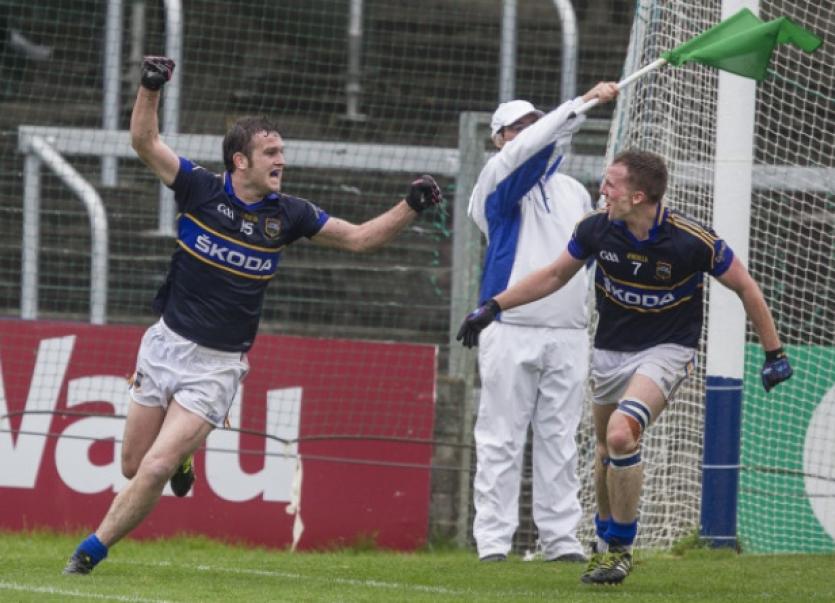 Producing their best display of the year to date, particularly in a scintillating first half, Tipp once more upset the form book to defeat Division 2 side Laois on their home patch.

The victory puts Tipperary into the last 12 for the second time in three years, and should they manage to win against Galway on Saturday week in Tullamore, the Premier County would be in the All-Ireland quarter-finals for the first time since the ‘back door’ qualifiers were introduced in 2001. But all that speculation is for another day.

Back to Saturday’s Portlaoise performance from  Peter Creedon’s side, which was at times sublime and spectacular, but always battling and honest. It was as proud a display that Tipperary footballers have served up in years and the accolades won at the final whistle, from all quarters, were fully deserved.

This was a game that Tipperary won not once but twice on the day. At half-time the visitors, after playing some top-drawer football, went in leading by 2-10 to 1-3. However, by the 62nd minute Laois had clawed back the 10 points deficit to parity and with the momentum behind them would have been expected to triumph. To a man Tipperary once more found the will to drive on, perhaps still hurting from the pain of surrendering a lead to Cork in Munster, and heroically sealed a famous victory in the end by five points.

Tipperary started with the same personnel as the Longford game but set up in a different way. Peter Acheson and Michael Quinlivan took up the wing forward slots with Brian Fox going to centre-forward and Philip Austin to full. The switches worked superbly and the pace of the half-forward line was to cause Laois immense problems.

For the second week in a row Tipp had the tonic start with an early goal. Conor Sweeney, like he did against Longford, finished superbly inside three minutes from a sweet Peter Acheson pass.

Tipp had a second goal chance two minutes later but Michael Quinlivan’s effort was blocked in a congested area.

Unlike Longford’s capitulation though, the O’Moore side were up for the challenge. Donie Kingston kicked their opening point after six minutes and the same player played a huge part in their first goal a minute later. The big full-forward used his physicality to muscle through the Tipp defence and set up John O’Loughlin to blast past Paul Fitzgerald and the lead for Laois.

Michael Quinlivan relishing his more open role had a a further goal chance which went over for the equaliser.

Encouragingly Tipp had five real goal chances in the first 15 minutes, with Hannigan and Sweeney also  unlucky not to raise green flags. While annoyed at not availing of the opportunities the fact that the chances were coming was positive for Tipp.

Two points from play from Niall Donoher and Billy Sheehan put Laois 1-3 to 1-1 ahead in the 13th minute but amazingly the home side wouldn’t score again in the remaining 22 minutes of the first half.

In that period Tipperary would take control and score 1-9 without reply, all from play. At times the standard of football was as good as one would see at any level of the sport. In a complimentary way one was almost asking the question - “Is this Tipperary?”

Seven points in succession followed from Sweeney, O’Riordan, Fox, O’Riordan, Austin, Quinlivan and Austin as Tipperary pieced together some excellent passages of play. By the 24th minute they had taken command at 1-8 to 1-3 when they got their second goal. A low trajectory cross in to the goal area from Barry Grogan wasn’t dealt with by the keeper and Sweeney finished with aplomb.

In the run-up to the interval Brian Fox who was excellent all day in his overall play finished a field-length move out of defence with his second point, before the youngest player on the park, Colin O’Riordan also landed his  second point with a brilliant effort from 40 metres out.

The roar that accompanied the Tipp team off O’Moore Park at half-time was a  moment in time for Peter Creedon’s side.

What Tipp didn’t need at the start of the second half was to concede a goal. Almost tragically, as if in an effort to destroy the trojan opening 35 minutes’ work, Tipp conceded two goals inside five minutes. Credit to Laois for a determined resurgence but Tipp didn’t help their cause by some poor turnovers.

First half substitute James Finn blasted home Laois’ second goal inside three minutes and when Conor  Meredith got the third two minutes later it was game on.

Tipp responded perfectly, and herein may lie the  ultimate winning of the game. Three quick points in a row, from Philip Austin, Barry Grogan and Peter Acheson, all well worked and well taken, gave Tipp breathing space, and temporary respite from the Laois onslaught.

Laois now had their purple patch. A 45 from another  Laois sub M.J. Tierney followed by a pair of frees from Donie Kingston reduced the deficit to four before a slight reprieve for Tipp with a Philip Austin point.

Tipp were rocked again in the 57th minute with a fourth Laois goal. Colin O’Riordan was harshly adjudged to have over-carried and from the resultant free a goal came with David Conway netting.

But just as it seemed like Laois had gained the upper hand Tipp rose again.

Michael Quinlivan with a pin-point accurate pass found Sweeney who was fouled at the expense of a black card to McMahon. Grogan pointed the free for the lead.

Next Peter Acheson won a hard ball to set up Barry Grogan who again was taken down for another Laois black card (Meredith) with Sweeney pointing the free.

Now two points up with two minutes to go, a passing movement worked from Quinlivan to Austin to Acheson placed Grogan through and the Aherlow man blasted home to Tipp’s joy.

For Tipp this was a huge performance in so many respects. Again Ciaran McDonald was unbelievable at corner back with former All-Star Ross Munnelly well mastered. Robbie Kiely and Colin O’Riordan were also outstanding in defence. Steven O’Brien won a world of great ball at midfield, while the six forwards as a unit contributed 3-14 and all six scoring. Sweeney was again on form while Brian Fox and Philip Austin put in excellent games. Michael Quinlivan did a world of vital work also and contributed immensely to a great win.