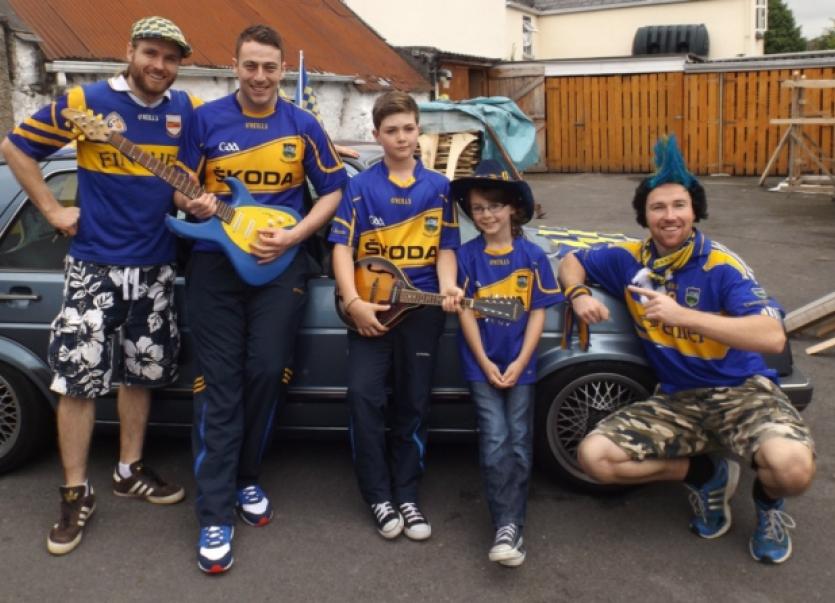 Cahir hurley maker and musician Johnny B O’Brien has scored another hit with his latest Tipperary All-Ireland song “This Could Be Our Year”.

Cahir hurley maker and musician Johnny B O’Brien has scored another hit with his latest Tipperary All-Ireland song “This Could Be Our Year”.

The stirring rock-pop anthem has received more than 53,000 hits on You-Tube since it was released before the All-Ireland final on September 7 as well as air play on Tipp FM, Tipp Mid-West and national stations RTE, Today FM and Beat FM.

Johnny B O’Brien, the lead singer with “Johnny B & The Boogiemen” said the band have received great feedback from Tipp fans about the song.

“We played at the Gravity Festival in Cahir and it was brilliant to see everybody at the front of the crowd knew all the words and music.”

Apart from the rousing tune, the song boasts clever, witty lyrics written by Johnny B. “I go to all the Tipperary games so it’s just easy to write about what you know”, he told The Nationalist.

The video accompanying the song opens with Johnny B in his hurley making workshop at Tipperary Road. Cahir. It features scenes with young GAA players from Cahir and staunch Premier County hurling supporters from a blue and gold festooned Treacy Park in Carrick-on-Suir mixed with shots of Tipperary hurling greats in action in past All-Ireland finals.

Johnny B is an old hand at composing All-Ireland anthems for his beloved county hurling team.

His “Premier Rap” song written for the 2010 All-Ireland final was the most requested song on Tipp FM that year. He followed it up with the Premier Returns for the 2011 All-Ireland.

Johnny B is the third generation of his family in the hurley making trade and he reports there is a great buzz at John O’Brien Hurley Makers workershop at the moment.

A giant six-foot hurley featured in the “This Could be Our Year” video takes pride of place in the workshop.

“We are very busy at the moment after the schools re-opening and it’s great when the kids come in. They are always asking about the video and all they want to see is the six foot hurley and try it out.”

With just days to go to the replay, Johnny B urged every Tipperary person to listen to the song and view the video and asked younger people savvy with social media to play it for their grannies and grandads.

Johnny B and The Boogiemen will perform “This Could Be Our Year” at the Tipperary team’s homecoming in Thurles on Sunday next.

As well as listening and viewing the song on You Tube, you can purchase the CD from the GAA shop in Clonmel and Lár na Páirce Museum in Thurles.