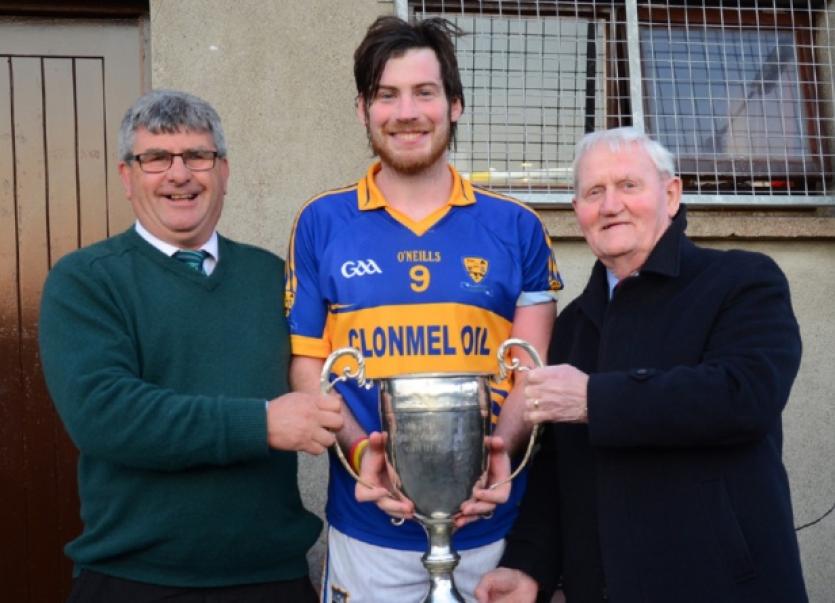 The footballers of Kilsheelan/Kilcash bridged a gap of thirty two years at Monroe on Saturday evening when they won the Clonmel Oil South SFC final defeating Clonmel Commercials on a historic day for the club.

The footballers of Kilsheelan/Kilcash bridged a gap of thirty two years at Monroe on Saturday evening when they won the Clonmel Oil South SFC final defeating Clonmel Commercials on a historic day for the club.

An outfit bursting with a great desire to succeed took a tight grip on this game early on and maintained that control to the finish to claim the Clonmel Oil Cup with a shock triumph over hot favourites Commercials.

It was a comprehensive win, eight points separating the sides at the end, and Commercials restricted to a single score from play.

It was only Kilsheelan’s fifth title and first since 1983 but the club has made a significant impact in recent years.

That’s serious representation from a small club on the biggest stage of all and all four made huge contributions to Saturday’s win. But it was essentially a team effort with a huge determination to put one over their town neighbours who had 22 South titles in the bag before the game.

Commercials, not firing on all cylinders on the day, had an opportunity to force their way back into contention midway through the second half but goalkeeper and man of the match Evan Comerford advanced quickly to block Michael Quinlivan to pull off a fantastic save and Kilsheelan were on their way to victory.

By the time county minor Brendan Martin finished off a Kilsheelan counter attack with a well struck goal, the game was over.

At that point Kilsheelan held a five point lead and their rapid transition from defence to attack paid rich dividends.

Bill Maher’s incisive pass picked out Martin whose goalscoring instinct kicked in as he turned his marker before placing a well placed shot low into the corner of the net.

Martin’s strike two minutes from time sealed the victory for Kilsheelan/Kilcash on a day when an admirable team spirit combined with a tremendous workrate all over the field was enough to see off their opponents.

Commercials had already qualified for the county knockout stages but Kilsheelan/Kilcash had to win to make the knockout stages and that need was reflected in their high intensity display.

Eoghan Ryan and Alan Rockett established superiority in midfield from the opening exchanges and the pair put in a huge shift to ensure their team controlled this vital area.

Kilsheelan’s defence restricted Commercials to just three points in the first half.

The village side kept edging ahead to build up a comfortable cushion with goalie Comerford picking off a total of six points from frees as well as doing a top job between the lines, pulling off important saves, none more crucial than that block on a Quinlivan effort midway through the second half.

There were five points between the teams at the break, Kilsheelan leading by eight points to three.

Commercials failed to build up any momentum in the second half that would have endangerd Kilsheelan’s stranglehold on the game but had Quinlivan managed to beat the Kilsheelan goalie with that effort, the town side would have been back in it.

The teams were evenly matched in that second half, scoring three points apiece until Martin’s late goal extended the lead to eight points.

Very little went right in front of the goal on the day for Commercials who finished the game with fourteen men after substitute Ian Barnes was sent off late in the game. They managed to score just one point from play through Jason Lonergan in the 29th minute and their five other scores came from frees converted by Michael Quinlivan.

The victory was a source of immense pride to the Kilsheelan/Kilcash community as their senior footballers added another south title to the four already secured in 1930, 1933, 1970 and 1983. The 1970 win was their last achieved against Commercials.

It was a memorable day for all involved but in particular for families who enjoyed a link with the 1983 team.

“It means so much to everybody in the club and in the area and this victory is going to have a huge impact on how the club drives on from here. It gives everybody a fantastic boost,” said club chairman David Power.

He praised the members of the club who were responsible for putting strong juvenile structures in place over the years and everybody associated with the club for the work they do every week for all the teams put out by the club.

“We have enjoyed considerable success over the years at underage level, this has been a gradual process and great progress has been made,” said Power.

“This is not just about any one individual, everybody works together for the good of the club. We are going very strong at the moment”, he added.