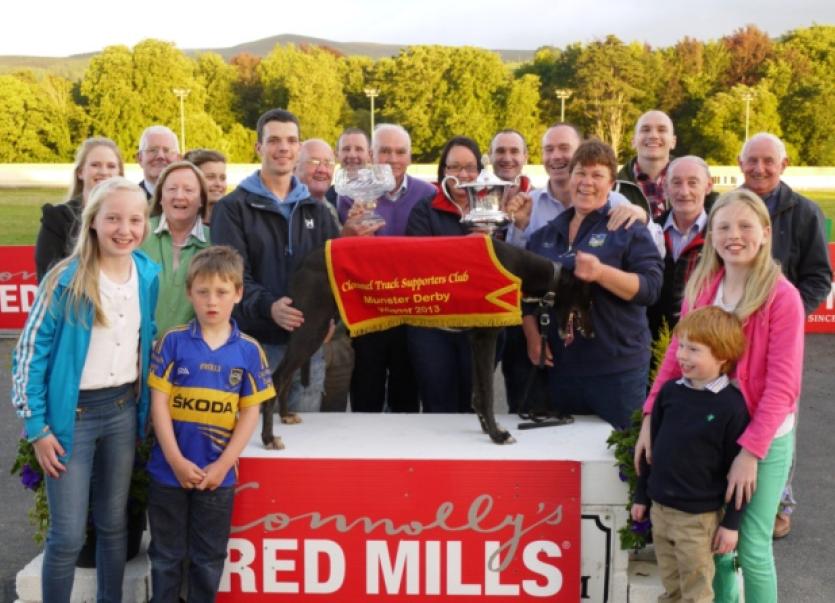 The feature event on a smashing card on Sunday was the eagerly awaited final of the Clonmel Track Supporters Munster Derby which carried a winner’s prize of just a tenner short of five thousand grand.

The feature event on a smashing card on Sunday was the eagerly awaited final of the Clonmel Track Supporters Munster Derby which carried a winner’s prize of just a tenner short of five thousand grand.

Impressive semi-final winners Skywalker Star and Ardrahan Zebo, both trained by Frances O’Donnell, were inseparable in the market and went to traps joint favourites at 2/1 with Droopys Kirani popular at 3/1.

However, the race did not pan out as generally expected and it was trainer Pat Buckley, on the crest of a wave following his superb success with 6/1 winner Farloe Trent in the Boylesports.com Race of Champions in Tralee on Friday night, who provided another big priced winner with his 7/1 chance Universal Dream.

The final provided a tremendous climax to what has been an excellent competition and a highly exciting finish had the healthy attendance on their feet in a welter of excitement.

Haughty Oscar set the pace in the blue jacket as first bend trouble saw the hopes of Skywalker Star and Droopys Kirani dashed. With Castlelyons Zack a slow starter only three counted as they turned into the back straight where Haughty Oscar led from Ardrahan Zebo and Universal Dream.

Universal Dream closed on his rivals at the penultimate bend and with Ardrahan Zebo getting the better of Haughty Oscar the scene was set for a mighty battle to the line. The Buckley runner challenged on the outside in the straight and to a great roar from his supporters got his head in front of a gallant Ardrahan Zebo just where it mattered with the admirable Haughty Oscar only half a length away in third place four lengths clear of Skywalker Star.

The time was 28.81 and Universal Dream (Top Honcho-Kildallon Maid) which is owned in Firies, Killarney by Jerry and Owen Flynn ran the race of his life.

The Derby was the penultimate event of the evening and proved a great spectacle but the final race on the card The Red Mills Getting Out Open 525 produced a hugely impressive fastest of the night display from Brogan Henry (Head Bound –Brogan Beetle) which defeated the odds-on Refuge of Sinner by three lengths in a brilliant 28.51.

Race 1 (A4/A5) – Johnny’s Legacy, off the track since winning on his debut last November, gave a fine display by breaking fast in the striped jacket and surging clear off the opening bend to defeat Not an Ace and Montos Maldini by four and a half lengths and three lengths in a very smart 29.07. The 2/1 winner is a son of Killahan Phanter and Slimline Again owned and trained in Dungarvan by Tommy Caffrey.

Race 2 (Open 300) – Sibarian Jet went off the even money market leader for Graham Holland but lost all chance when badly baulked at the first bend together with Express Dealer. Rathorpe Scudo broke in front from Golden Jayjay and romped to a six and a half length success over his rival with Express Dealer two and a half lengths away in third. Rathorpe Scudo is owned and trained in Johnstown by Joseph Tobin and the son of Ballymac Ruso and Rathorpe Star clocked 16.26 in posting a second career win.

Race 3 (A3) – Favourite backers drew first blood with the success of the 6/4 chance Shelbourne Ollie which overcame a slow start to challenge on the back straight and with plenty of trouble behind Niall Dunne’s charge drew clear to come home some twelve lengths clear of Coologue Diver and Minor Budget in 29.39.

Owned by Fr. Dan Greene Shelbourne Ollie (Head Bound-Shelbourne Capri) who was chalking up an eighth career success was initiating a double on the night for the trainer.

Race 4 (A2) – Easy to back at 7/2 Haughtyvanpersie was another to overcome a slow start.

This son of Black Shaw and Trumpers Lemon showed fine pace on the rails down the back straight to lead at the third bend and had just enough in the tank to hold the strong challenge of the very consistent Chamberlain Aine by half a length with Sparta Bruce four and a half lengths back in third place. Owned jointly in Mallow by Frank Clune and Anne O’Brien the winner clocked 29.17 to break his maiden at the third time of asking.

Fast Fit Conor owned in Gort by John Quinn was supported to 5/4 to complete the Niall Dunne double in the first leg and the son of Vans Escalade and Bodyshop Nikita duly obliged but only just. Fast Fit Conor led on the run up and enjoyed a good lead on the back straight before Lough Maller emerged from the pack and stormed home only to go under by a head. Other Bishop took the third qualifying place a length and a half behind the principals. Fast Fit Conor clocked a useful 30.26 to gain a seventh career win.

Maddies Dream was a warm order at 4/6 in the second semi which was dominated by the two inside runners. Pass her Dolly in the red jacket led up the centre of the track but the favourite gained the rails in front from her trap two draw. The pair had it between them for the remainder of the trip and in another exciting finish Pass her Dolly came again to get up on the line and gain the verdict by a head after a great battle.

Pass her Dolly a daughter of Droopys Kewell and Pass her Over was gaining a sixth career win for Kilmallock owner trainer Mary Hanley and she stopped the clock in 30.25.

The favourite Chaotic Sultan was first to show but Stanleys Dream bidding for a Niall Dunne treble made the bend on the rails and led from Farranrory Zak. Billis Adare made good ground on the back straight to challenge the leader between the final bends

and Graham Holland’s charge powered clear to defeat Stanleys Dream by three lengths with Toystory Aston a length and a half away in third spot. Owned by Robert O’Hara and William Slattery the winner is a daughter of Hondo Black and Rising Smoke and she clocked a career best 29.07 to gain her seventh success.

Refuge of Sinner was the 4/5 favourite to gain some compensation for trainer Frances O’Donnell for the narrow defeat in the Munster Derby but her charge caught a tartar in the shape of the 9/4 chance Brogan Henry which had created a big impression when scoring in 28.61 in Clonmel earlier in the month. After Express Slide had led up Brogan Henry took command at the first bend and raced clear for a very impressive win over the favourite in a brilliant career best and fastest of the night 28.51. Skyview Blue took third place and the distances were three lengths and two lengths.

Run of the Week - The performance of Brogan Henry in clocking 28.51 in Sunday’s final event was a fitting climax to two excellent nights racing at the Suirside track and stood head and shoulders over several other classy displays.

One to Watch - Though no match for the impressive hotpot Papa Smurf in Thursday’s novice event, Popular Bubbles made a promising debut and this son of Ace Hi Rumble and Molly Bloom looks one for the notebook.

At the track on Thuersday night Point Hondo emerged as the star of the session with a stunning performance that stopped the clock in a superb 28.78 in the first semi-final of the prestigious Tipperary G.A.A. and Track Supporters Club A4 Stake.

Owned and trained in Golden by John Ryan the son of Hondo Black and Golden Pride put his rivals to the sword in a race which saw the first five record career best displays.

Stag Park Wood (Kells Piper-Laoi na Mara) retained his unbeaten record in the event with another fluent trap to line win in 29.06 in the second semi-final. He is owned and trained by Mitchelstown enthusiast Richard Pigott.

Whilst Point Hondo is now likely to be a warm order to take the big 1,700 euro prize in next Sunday’s final the great early pace of Stag Park Wood should prove a major factor whilst the rapidly improving Minor Friend next is expected to be a big contender for local owner Mary O’Connor.