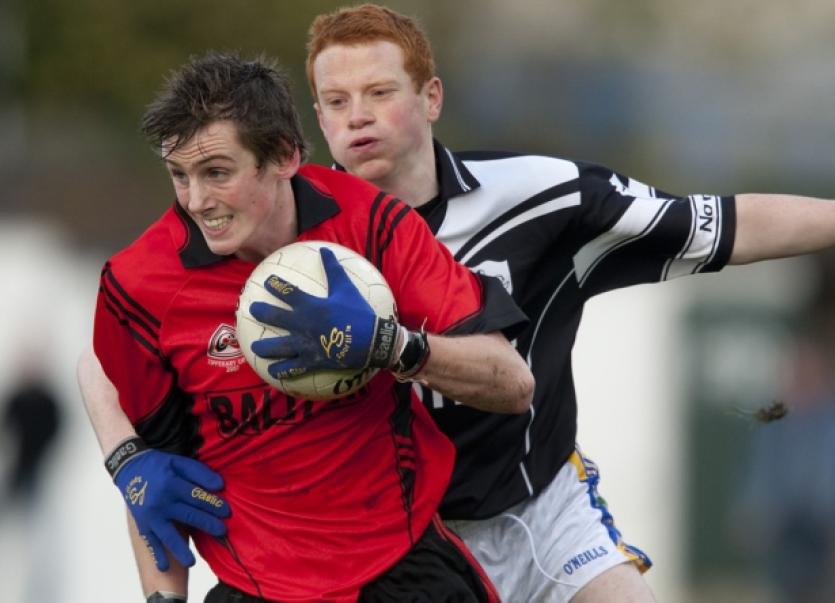 At Walsh Park, Waterford, on Sunday, Ballyporeen eventually overcame De La Salle in the Munster IFC quarter-final replay and in the process earned for themselves the bonus of a home tie next Sunday against Clyda Rovers of Cork.

At Walsh Park, Waterford, on Sunday, Ballyporeen eventually overcame De La Salle in the Munster IFC quarter-final replay and in the process earned for themselves the bonus of a home tie next Sunday against Clyda Rovers of Cork.

Sunday’s re-match however never lived up to the excitement and drama of the drawn game in Clonmel seven days earlier, and for long periods Ballyporeen struggled to press home their obvious superiority in footballing terms against the Waterford champions.

At half-time following a poor first half Ballyporeen could scarcely believe that they led by just a single point (1-3 to 1-2) having totally dominated proceedings. The big problem they had was in finishing with numerous chances spurned, three relatively easy close-in frees missed and eight wides recorded. De La Salle with far less possession made better use of their chances.

When eight minutes into the second period the Decies boys drew level with the best point of the game via Lee Hayes, it seemed that the home side were getting on top. The next three minutes, however, turned the game upside down.

Firstly the Tipp side were lucky not to concede a penalty when keeper Michael Sweeney got away with a subtle push in the back. The ball went up the field and Tommy Sweeney pointed. Immediately from the kick-out John Martin set up Conor Sweeney for a well executed goal and then DLS centre-forward Ian Cantwell, arguably their best player, received a straight red card.

From being level and beginning to assert themselves, to going four points down and a man short in three minutes, the game had been turned on its head. There was to be no way back for the home side after that.

From then to the finish Ballyporeen utilised the extra man - and the resultant space created - to good effect and they tagged on a further 1-4 withou reply for an 11 points winning margin in the end.

Their third goal came in the 59th minute when Anthony Crotty and Danny Barrett inter-changed passes before Barrett fired low and hard to the net.

It was his last piece of action on the day and his replacement Fionnán O’Sullivan had the final point of the game with his first touch, before the public address had time to announce his arrival on the field.

While it looked very easy in the end for the Bally’ boys they will not be at all happy at taking so long to see out this game. They were slow to start and it took them 11 minutes to register a score when Conor Sweeney had their first point, making up for his two earlier missed frees.

In the drawn game the Tipperary champions conceded four goals and in Sunday’s replay they were stunned in the 14th minute when in their first attack of any note Lee Hayes goaled for DLS, rising highest between goalkeeper and full-back to fist home. As mentioned Sweeney was later fortunate not to concede a penalty. Obviously Bally’ have work to do before the Cork side arrive in town.

In fairness to Ballyporeen the response to this setback was immediate and impressive. Conor Sweeney and Darragh Lyons, both prominent throughout, worked through the De La Salle backs and Lyons despatched an excellent finish to the top corner of the net to regain the lead.

In the 10 minutes leading up to half-time both centre-forwards, Conor Sweeney and Ian Cantwell, scored a free and a point from play each, leaving the Tipp champions ahead by the minimum at the half-time whistle.

Conor Sweeney’s goal and the dismissal of Ian Cantwell were the game’s defining moments early in the second half. It was only then that Ballyporeen played the type of football they are capable of. As the game opened up thereafter, Conor Sweeney, John O’Callaghan and John Martin all kicked nice points before full-forward and target man Danny Barrett delivered the coup de grace at the death with goal number three.

Glad to be over this tricky hurdle and with a home fixture to follow in the semi-final, Ballyporeen will know full well they will have to do better the next day, sharpening up in front of goal (they had 13 wides on Sunday) and steadying up at the back.