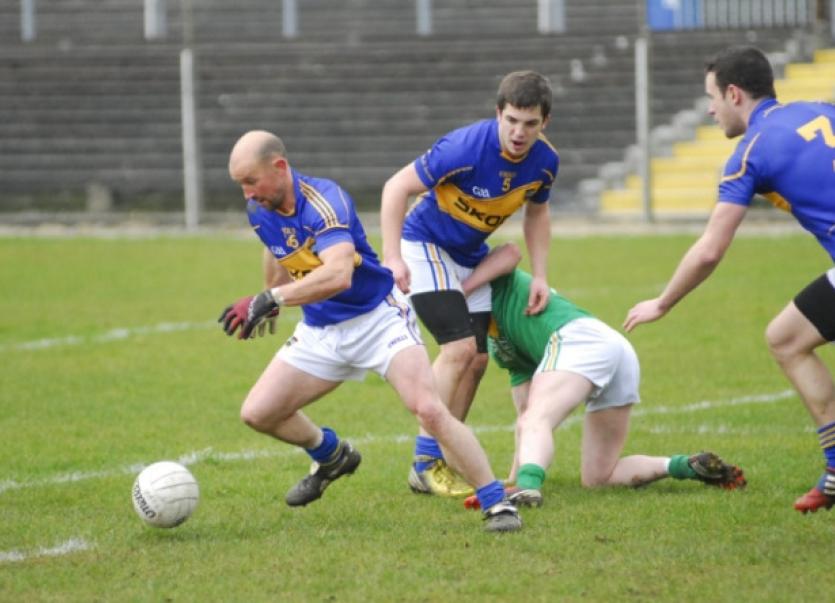 Tipperary footballers confirmed their promotion from Division 4 of the Allianz League in style last Sunday in Carrick-on-Shannon as they proved far too strong for hosts Leitrim, winning 5-16 to 0-16.

Tipperary footballers confirmed their promotion from Division 4 of the Allianz League in style last Sunday in Carrick-on-Shannon as they proved far too strong for hosts Leitrim, winning 5-16 to 0-16.

Tipp didn’t take long to stamp their authority on the contest as an incisive passing movement was finished to the Leitrim net by Brian Fox just 12 seconds in, setting the tone for a dominant display.

The crucial score came from Philip Austin deep into added time at the end of the first half as he pounced on a loose ball to fire home Tippeary’s third goal, a score that gave them a 3-8 to 0-10 halftime lead.

Austin’s goal proved a killer to the home side who had fought back from a seven point deficit and with a vocal home support, they were desperate to launch a strong second half challenge that might have kept their own slim league hopes alive.

But the third goal drained whatever belief remained in the Leitrim players and Tipperary were at their ease in the second half, adding two more goals from Ian Fahey and the impressive Conor Sweeney who landed 2-7 on the day.

Tipperary made a statement right from the throw-in when Peter Acheson, George Hannigan and Conor Sweeney combined to release Brian Fox for a devastating goal after just 12 seconds.

Leitrim then hit three points and looked as if they would seriously threaten the visitors but that early threat never materialised. Tipperary struck in devastating fashion when Conor Sweeney half-volleyed the ball soccer style to the net after a Michael Quinlivan pass.

Tipperary should have had three more goals but for better handling and finishing and Leitrim hauled themselves back into contention with seven points over 12 minutes.

But just as Leitrim were beginning to hope again, Philip Austin pounced on a loose ball to net from close range to give Tipperary a 3-8 to 0-10 half-time lead.

Nine minutes into the second half, Conor Sweeney brilliantly palmed a long ball into the path of Ian Fahey and the Clonmel Commercials man put a rocket into the Connacht side’s net.

That killed off the game and with Leitrim losing a man to a second yellow, Tipperary confirmed their victory with 1-4 in the final ten minutes, the goal coming when Ballyporeen’s Conor Sweeney blasted to the net.