‘Bubbles’ pops up with late winner for Killenaule 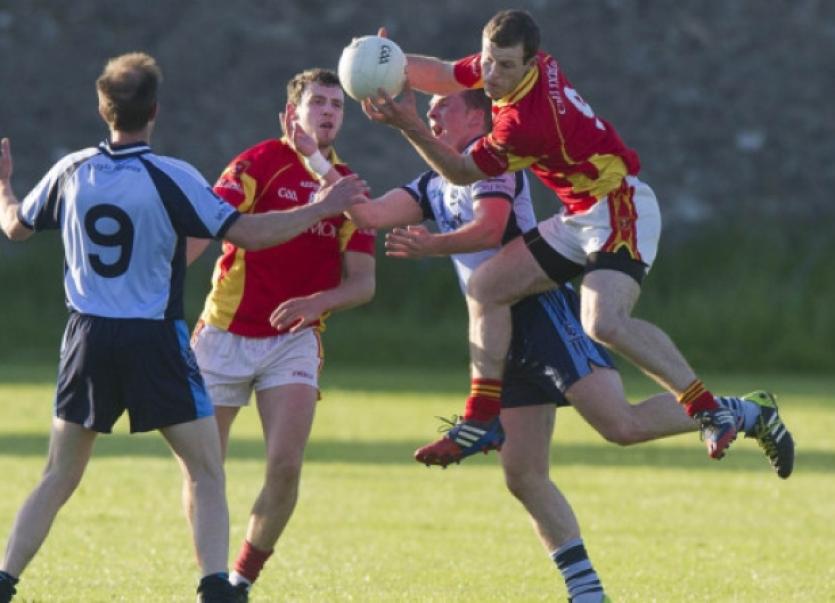 Killenaule emerged the narrowest of winners over fellow South side Moyle Rovers in this County SFC game at Fethard last Wednesday.

Killenaule emerged the narrowest of winners over fellow South side Moyle Rovers in this County SFC game at Fethard last Wednesday.

Played on a perfect evening for football, both sides served up an entertaining game which went right down to the wire. It took a solo point from John ‘Bubbles’ O’Dwyer in the 58th minute to separate the sides, the centre-forward wiggling his way through the Rovers defence to fist the ball over the bar.

However Killenaule seemed to make hard work of this win. They looked to be in control of matters at a couple of stages during the game but each time allowed the Powerstown/Lisronagh outfit back into contention.

Killenaule were first on the scoreboard after five minutes when John O’Dwyer pointed from 30 metres, and went two up a minute later with Greg Henry’s first of four points.

Cathal Bergin then broke through the Rovers’ rearguard to have a shot at goal which somehow Ed Burke managed to keep out with his keeper beaten. Had Rovers conceded a goal at that stage the game might have been an entirely different story.

In the eighth minute Killenaule ’keeper Matt O’Donnell was summoned to convert a 45 metre free which put his side 0-3 to 0-0 ahead and firmly in control.

County star Peter Achesonwas trying hard to inspire his troops and opened the Rovers’ account with a point from 35 metres. However it was quickly equalled by a point from Killenaule corner forward Eddie O’Brien, restoring their three points lead.

Rovers responded with a a Brian Mulvihill free and a point from Craig Condon to cut the lead back to the minimum by the 13th minute.

However Killenaule shoved on again and three quick points gave them breathing space. After Gearóid O’Rourke and John O’Dwyer raised white flags, county senior football captain, Paddy Codd, operating at midfield, kicked a long range effort to leave his side 0-7 to 0-3 to the good.

Just when it looked like T.J.Maher’s side were taking control, Rovers struck back. A movement involving Rian Clancy and Acheson found Craig Condon on the edge of the square and ‘Chuckie’ made enough room for himself to blast to the net.

Rovers with the breeze to their advantage started the second half better and following two poor wides, Sean Keating and Craig Condon kicked excellent points to give them the lead for the only time in the game after 36 minutes.

Again sensing the danger, Killenaule rallied with three points in four minutes, two from Greg Henry and the other from Paddy Codd to go to back in front.

The introduction of county minors Stephen Quirke and Danny Owens added impetus to the Rovers challenge. Almost with his first kick of the game Quirke landed a sweet point and then Mulvihill with a free in the 47th minute levelled matters at 0-11 to 1-8.

Greg Henry nudged ‘The Robins’ in front once again after 51 minutes but the inspirational Acheson worked his way through for a great point to level with just five minutes remaining.

However with just two minutes left to play, ‘Bubbles’ jinxed his way through and bookended the scoring with the game’s final point for a deserved win.

Having already defeated Moycarkey/Borris in this group Killenaule are now nicely placed and still unbeaten.

For Moyle Rovers Peter Acheson was once again outstanding while others to put in strong displays were Alan Campbell, Danny Lyne, Ronan Desmond and Craig Condon.

The Powerstown/Lisronagh club are certainly going through a period of transition right now. The extent of that change can be gauged when one takes a look at when these same two sides contested the South Senior Football final two years ago. Only six of the Moyle Rovers team which started that night played on Wednesday last in Fethard.