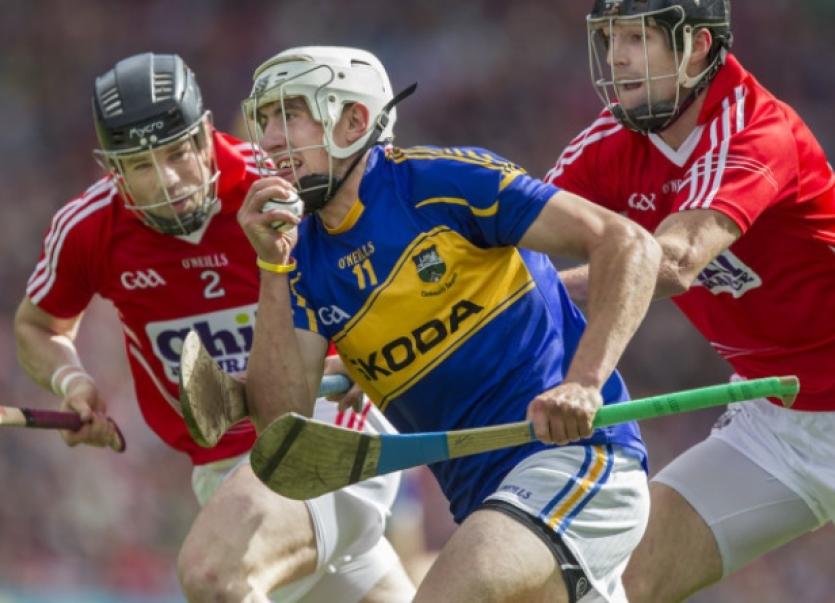 A performance that came as a bolt from the blue, and gold, scorched hot favourites Cork, shook Croke Park and sent Tipperary steaming towards another All-Ireland Hurling Championship Final date with Kilkenny.

A performance that came as a bolt from the blue, and gold, scorched hot favourites Cork, shook Croke Park and sent Tipperary steaming towards another All-Ireland Hurling Championship Final date with Kilkenny.

Delving deep into their reserves of style, skill and resilience, they dug out a wonderful display that helped them achieve a surprisingly easy victory in a one-sided semi-final on Sunday.

Who saw this coming? Not too many, surely, outside of the Tipperary camp.

Were Tipperary that good or were Cork as woeful as they appeared? The truth, as is often the case, probably lies somewhere in between. Tipp were sharper and streets ahead of their opponents in thought and deed, with every player carrying out his duties in an overall performance that functioned like a well-drilled military exercise.

From Darren Gleeson’s short and accurate puckouts to the clever creation of space in the forward line that was willingly exploited by Seamus Callanan, Bonner Maher, John Bubbles O’Dwyer and company, they got their tactics spot-on.

They’ll have to come up with another cunning plan when they face Brian Cody’s Kilkenny on September 7. However that’s for another day. For now the team deserves the plaudits for beating the Munster champions, a side arguably stronger than that which came within an ace of winning last year’s championship, in such convincing fashion.

Apart from the margin of 10 points, the composition of each team’s score tells its own story. 2-17 of Tipperary’s 2-18 came from play; 1-7 of Cork’s 1-11 came from play. Cork were only two points adrift at the break but they shot 9 wides in that first half, which drained their confidence.

Yet, for all that, and the points difference between them running into double figures at the final whistle, all that separated the sides at the halfway stage was a mistake by a Cork defender that enabled Seamus Callanan to execute a perfect finish that offered his team an interval advantage of 1-7 to 0-8.

The error was made in the 6th minute by corner back Shane O’Neill, who allowed Shane McGrath’s delivery to slip through his fingers before the ball was snapped up by Seamus Callanan, who speared a crisp shot past Anthony Nash for the opening goal. Alan Cadogan had opened the scoring for Cork after just 33 seconds, the only time they were ahead.

The expected cavalry charge from Cork at the beginning of the second half never arrived. Remarkably Cork scored just 1-3 in the second period, the goal coming four minutes from the end when the outcome had long since been decided and at a stage when many of their supporters were already on the homeward journey.

Taking great encouragement from their first half display, Tipp soon took up where they left off within minutes of the re-start, outscoring Cork by 1-4 to 0-1 in the third quarter. They could have had a goal if Lar Corbett had been able to control Bonner Maher’s pass but they were up and running when Shane McGrath, James Woodlock and Seamus Callanan reeled off points.

Sensing that the game was sliding from their grasp Cork made a double substitution, Paudie O’Sullivan and Stephen Moylan replacing Alan Cadogan and captain Patrick Cronin. They had the next point, a free from Pat Horgan, but when Seamus Callanan gathered Bonner Maher’s pass and shot Tipp’s second goal with a sublime strike 12 minutes into the second half The Rebels’ spirit was fractured beyond repair.

Two minutes later Seamus Callanan dropped the ball when he was lining up another pop at goal but Tipp were so superior at that stage that missed chances - Bonner Maher later ran the ball out when he was in a good position - didn’t obstruct their victory march. John O’Dwyer had a point that was answered by Conor Lehane, one of the few Cork players to emerge from the wreckage with his reputation intact. However the Tipp juggernaut kept rolling along with two points from Bubbles and another from James Woodlock before Darren Gleeson denied Conor Lehane with a save that deflected the ball over the bar.

Tipp responded with further points from Seamus Callanan (two) and Noel McGrath. Not even the concession of a late goal, driven home by Rob O’Shea four minutes from the end, could rain on Tipp’s parade.

The venue ensured that a new chapter in the fabled history of the fixture was scripted, with a large attendance of 68,728 gathering at GAA headquarters. There was even a carnival atmosphere in Dublin and in the stadium before the game, with the uniqueness of this famous and friendly rivalry transported to the capital.

However after Seamus Callanan scored the first goal the occasion gradually turned sour for Cork and their huge support. Bubbles O’Dwyer landed two points, with Aidan Walsh responding. Seamus Callanan and Seamus Harnedy traded points but a pattern had already developed. Tipp had settled the better, making the most of their chances and winning their individual duels, especially in defence, while their use of the ball was intelligent and smart.

By contrast Cork were still trying to get to the tempo of the game, perhaps affected by the five weeks lay-off since they beat Limerick in the provincial final. They shot some poor wides, with the normally reliable Pat Horgan missing a free and a ‘65, while it was left to goalkeeper Anthony Nash to show the forwards the way by converting two frees from his own half.

After Shane McGrath made it 1-5 to 0-4 Cork enjoyed a period of dominance but were frustrated by shooting four consecutive wides. When a Conor Lehane score pulled the deficit back to a goal they were further deflated when Damien Cahalane’s attempted delivery was smothered by Bubbles O’Dwyer before he steered a shot over the bar. Lehane, again, and a Pat Horgan free left just 2 points in it at the break but Tipp had taken enough encouragement from their opening half display to use it as a launch pad for a second half blitz that saw them outscore Cork by 1-11 to 1-3.

All the leading performers wore blue and gold in a contest that won’t rank among the classics contested by these counties. The only players who didn’t play near the peak of their powers were Noel McGrath, Gearoid Ryan and Lar Corbett, who still managed to turn in decent displays. By comparison Mark Ellis, Anthony Nash and Conor Lehane were the only Cork players to make a real impression.

The result of it all is that, four games later, a team that faced a barrage of criticism after their defeat by Limerick at the beginning of June is now through to the All-Ireland Final.