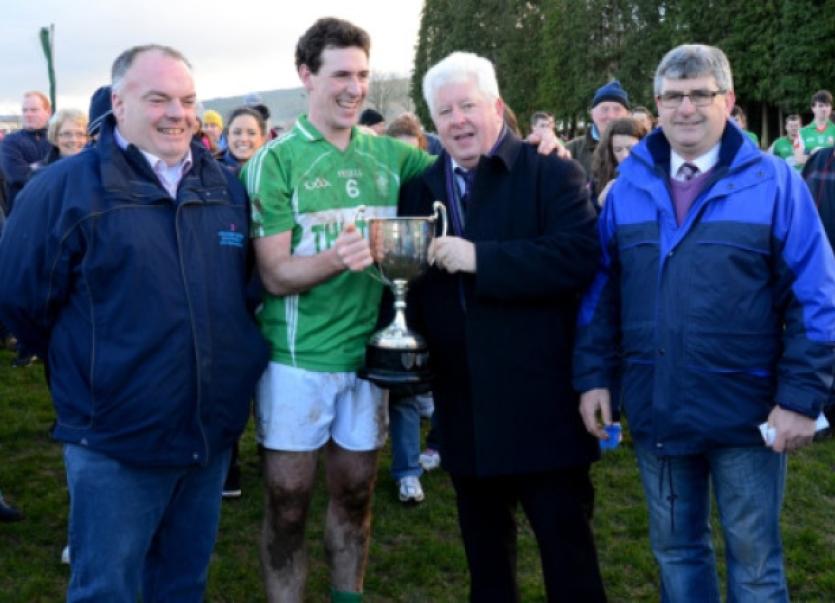 Grangemockler/Ballyneale and Mullinahone met last Saturday in Kilsheelan in the Clonmel Credit Union South Intermediate Football Final and the last time the teams met in an adult final was back in 1913.

Grangemockler/Ballyneale and Mullinahone met last Saturday in Kilsheelan in the Clonmel Credit Union South Intermediate Football Final and the last time the teams met in an adult final was back in 1913.

Mullinahone were victorious that day but Grangemockler/Ballyneale evened up the stats winning 2-7 to 0-10 in a very entertaining game.

Grangemockler/Ballyneale got the better of the first few exchanges and after only ninety seconds Mickey Cronin scored a good point from play and from Alan Walsh’s kick out, Enda Fogarty won possession and was fouled and Paul Cahill converted the free to make it 0-2 to 0-0 after three minutes.

Grangemockler Ballyneale was very focused on the task in hand and moved the ball very quickly and had Mullinahone on the back foot. The pressure resulted in a 45 which Cahill kicked short to Michael Meagher who pointed to put them 0-3 to 0-0 after six minutes. Grangemockler/Ballyneale were stringing some lovely passes and running good support lines, Mullinahone were struggling to get their hands on the ball.

Paul Cahill added another point from play and with 15 minutes gone Grangemockler Ballyneale were well in control.

Paul Curran and Kieran Maguire were having a great battle in midfield but an over zealous tackle from Curran on Maguire resulted in Curran getting a yellow card. A Michael Meagher free made it 1-5 to 0-1 after 18 minutes and then Enda Fogarty sent over the best score of the day to extend the lead.

However Mullinahone did not panic, started to string some passes together and asked some questions of the Grangemockler/Ballyneale backline but found it hard to convert the pressure into scores. Eoin Kelly pointed two more frees to leave it 1-6 to 0-3 at half time. As the game approached half time Grangemockler/Ballyneale lost another forward to injury as Mickey Cronin has to leave the field and was replaced by Kean O’Shea.

After early Grangemocker pressure in the second half, Mullinahone improved and Michael Dunne kicked a point from play. Eoin Kelly then pointed a free to cut the lead to 4 points.

Mullinahone upped the pressure on the Grangemockler Ballyneale back line and only for some indecision could have goaled but had to settle for a 45 pointed by Kevin Walzer to leave 3 point between the teams. Mullinahone’s eagerness to close the gap on Grangemockler result’s in Cathal Horan and Sean Walzer both receiving black cards in a 4 minute period.

However Kevin Walzer scores a point to leave two points between the sides. Grangemockler needed a response and they got if from Michael Meagher who hit a superb goal following good work from Pa Harris to make 2-6 to 0-7.

Mullinahone reduced the gap to 4 points from a free by Eoin Kelly. Paul Cahill, who was showing his class and experience was controlling the game for Grangemockler Ballyneale and capped off a brilliant display with a lovely point with 5 minutes to go to restore his team’s 5 point lead 2-7 to 0-8.

Eoin Kelly pointed two more frees for Mullinahone but they could never make up the gap, with some great defending from James Wallace, Brian McCarthy, Willie Lambe and captain Peadar Downey.