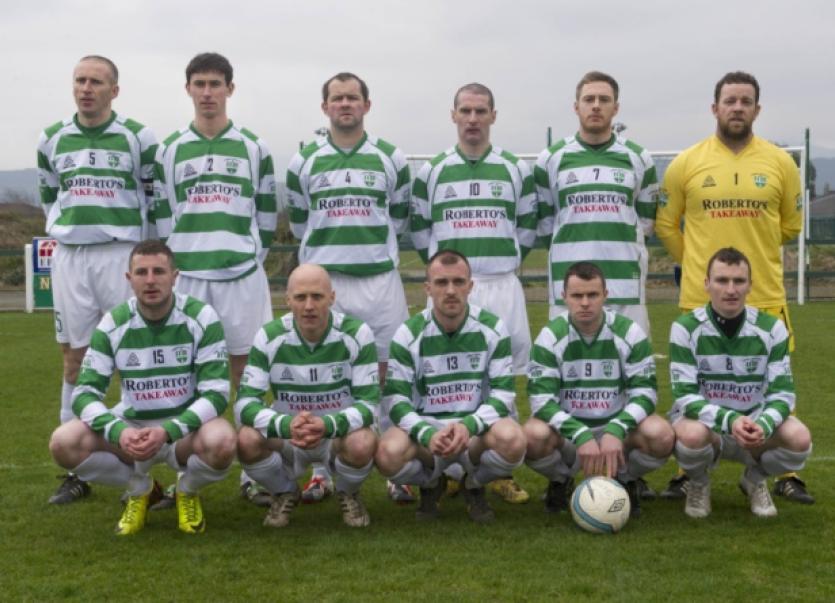 Holders Saints made their exit from the Munster Junior Cup on Sunday losing out in a penalty shootout after a titanic battle with Waterford kingpins Carrick United at Cooke Park.

The visitors started the better and were unlucky not to open the scoring after only a minute when Anthony Power shot over from just outside the area.

They continued to harry and hassle a subdued home side and had a number of other half chances before St. Michael’s had their first effort on target, a header from Paul Breen. The pattern of the half was well set however and it was a game of two very strong defensive units cutting off any creative spark from either side, setting up a tense tactical battle. One final effort of the half saw a well marshalled Jimmy Carr finally throw off the shackles and cross from the byline, but to no inrushing Saint’s striker and the chance was lost.

United again started strongly in the second half, and a minute in Aaron Wall had to be lively to stop an Ian Cleary effort, but as the half began to wear on, the visitors started to tire visibly and the home side started to come more and more to the fore. Mark Mc Grath went close on the hour mark and three minutes later only a poor final pass by Carr stopped Richie Ryan going clean through on goal. The home side however, lost two big players in McGrath and Thomas Fahey to injury 20 minutes before the end, and this put a stop on their momentum but they still almost nicked a winner minutes from the end when James Walsh saw an effort blocked on the line after a Brian Buckley corner.

Extra time was more of the same, with the home side looking livelier, but their only real chance came from Danny O’Brien who forced Carrick keeper Adrian Walsh to push his goal bound shot onto the post and away to safety.

The game was then finally decided on spot kicks, and although the home side took an early lead in the shootout, bad luck and fine keeping by Carrick, along with some nerveless penalties gave the Waterford side a victory and finally wrestled one of the trophies that made up the Saints Super season away from them.