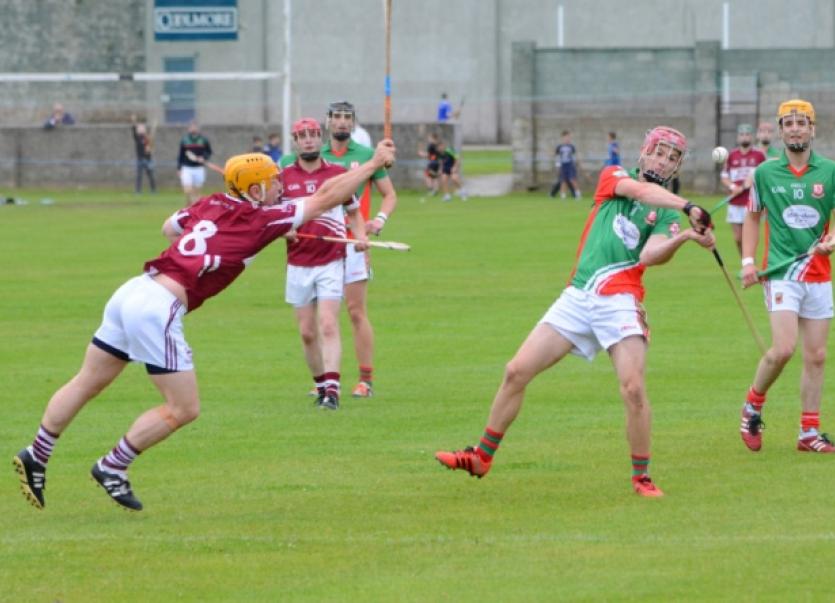 In their second South SHC ‘semi-final’ in 11 days, Mullinahone, this time, made sure of their place in the divisional  decider with a narrow win over near-neighbours Ballingarry at Fethard on Saturday evening last.

In their second South SHC ‘semi-final’ in 11 days, Mullinahone, this time, made sure of their place in the divisional  decider with a narrow win over near-neighbours Ballingarry at Fethard on Saturday evening last.

Before last Saturday’s game Ballingarry were quietly confident of upsetting the formbook especially with the game being played in Fethard and the fact that Mullinahone were still short four or five first choice players for a multitude of reasons. It was predicted to be very tight and it proved to be exactly that.

Over the course of the hour the sides would be level on eight occasions. From start to finish the game was in the melting pot and it was only in the last few minutes that the Kickhams finally got on top to force themselves over the line.

The man Mullinahone have to thank most for pulling them through was centre-forward Sean Curran who scored a dozen points in putting in a man-of-the-match performance. They needed every one of them to overcome a spirited Ballingarry challenge.

Right from the start it was all action and within 40 seconds both sides had a point on the board, Padraic Hayes’s opening score matched by a rousing response by Eoin Kelly from the right sideline.

It set the tone for the evening, both sides rattling off three points apiece inside the first five minutes with some superb accuracy, Ciaran Shelly and Philip Ivors efforts matched by scores from Sean Curran (free) and Kevin Bolger with a huge point from inside his own half.

A period of superiority had Mullinahone 0-7 to 0-4 up after 12 minutes but in a game that ebbed-and-flowed Ballingarry got their noses back in front with the game’s first goal mid-way through the first half. A break through the middle by Dylan Walsh set up Philip Ivors and his low shot beat Alan Walsh for a 1-6 to 0-7 lead for Ballingarry.

The next four scores were all Mullinahone and their goal on 22 minutes put them four clear; a great defence splitting run by Sean Curran set up Paul Kelly and the dual All-Star made no mistake to rattle the back of the net.

Ballingarry responded immedately with their second goal of the game, a long ball delivered in to square was mixed-up by goalkeeper James Logue and Alan Curran with Tommy McGrath reacting swiftly to ground pull the sliothar home.

In the closing minutes of the half Eoin Kelly hit a beautiful point from 40 metres out on the left demonstrating that class is permanent. And as  Padraic Hayes had opened the first half scoring, he finished it also with another super point for Ballingarry to lead 2-9 to 1-11 at half-time.

Score for score after the interval the pattern continued. When the excellent Ger Fennelly hit a point from the half-way line 10 minutes in he put his side three up and in a good position.

Crucially the next five points went to Mullinahone. Ballingarry conceded two frees and a wayward puck-off, all pointed by Sean Curran. And then two further points by Eoin Kelly and Sean Curran put Mullinahone two up. In the space of six minutes Ballingarry went from three up to two down. It was significant.

With seven minutes remaining it was still all-square (for the eighth time) and extra-time looked a possibility. Mullinahone finished the stronger though forcing frees and with Sean Curran magnificent with placed balls they held out for the deserved two-points win.

Always exciting even if it never really hit the white-hot intensity that often comes with this local derby fixture, it was an enjoyable spectacle nonetheless. Mullinahone will be glad to be back in a South final and with a full complement of players will relish another cut at ‘The Robins.’ Sean Curran was excellent on the night, Eoin Kelly’s five points were top class, and others to have their moments were Kevin Walzer, Gary Cronin, Niall Curran, Kevin Bolger and Michael Dunne.

Ballingarry gave their all and were right in it up to the death. For them Gerry Fitzgerald, Dickie Norton, Ger Fennelly and Ian Ivors did well in defence, Ciaran Shelly and Cillian Tuohy held their own around midfield while Philip Ivors was a constant threat in the forwards.