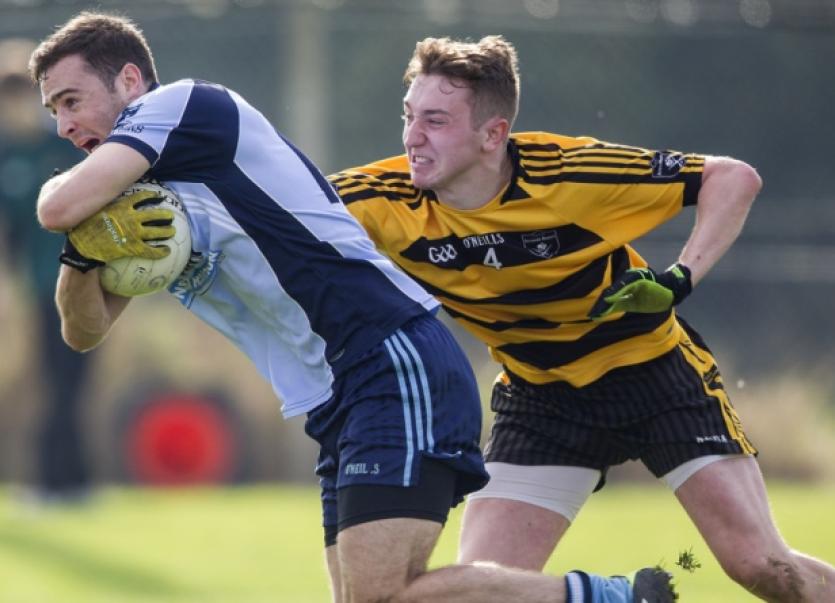 Moyle Rovers produced their best performance of the year to date at Leahy Park, Cashel on Sunday last, in the process booking their place in next Sunday’s County Senior Football Championship final.

Moyle Rovers produced their best performance of the year to date at Leahy Park, Cashel on Sunday last, in the process booking their place in next Sunday’s County Senior Football Championship final.

In what was a very entertaining game, free-flowing and open throughout, the South Division side survived a late rally from Arravale Rovers. It took a goal in the 60th minute from Peter Acheson to finally kill off the stubborn resistance of the West Division’s champions.

Played on a glorious  autumn day, both sides served up a thorougly enjoyable spectacle with Arravale having the more positive start to lead by 0-3 to 0-0 after seven minutes. Indeed their first score should have been a goal as early as the third minute; an excellent pass from Ger Mulhair put Bryan Lowry one-on-one with the keeper but indecision denied the opportunity and Moyle Rovers got off the hook.

Already having to field without their vastly experienced John Hayes, the Tipp Town side suffered another huge blow on 10 minutes when county senior star Ger Mulhair was forced off with a shoulder injury.

The Powerstown/Lisronagh side eventually got to the pace of the game and settled with three points of their own from Liam Boland and two from the highly effective midfielder Martin Dunne to level it at 0-3 apiece.

Mikey O’Dwyer, just on for Mulhair, kicked his side back in front before Rian Clancy levelled with a determined solo after Sean Keating’s excellent pass picked him out.

With Martin Dunne and Peter Acheson winning the aerial battle around the middle, Moyle Rovers benefited with points by county minors Stephen Quirke and Danny Owens to lead by two. But Arravale responded well with the Leahy brothers on the half-back line leading by example. Points from James Hogan (free) and a superb effort from Shane Leahy had the sides tied up again for the third time at 0-6 each after 21 minutes.

In the last five minutes of the first period Moyle Rovers got on top and strung together some impressive moves to edge two up by the break. Tadgh Fitzgerald with a point made it three in a row for the Moyle Rovers and Tipp minor contingent, quickly followed by another from distance from midfielder Martin Dunne who put in a mighty first half.

But Arravale too were capable of some well orchestrated moves and Mikey O’Dwyer kicked another fine point after a slow patient build-up. Moyle Rovers’ Diarmuid Foley had the last point of the first half to send his side in leading 0-9 to 0-7 at the end of an excellent half.

Right from the throw-in the Tipperary Town side indicated their intent, Niall Donovan running at the heart of the Moyle Rovers defence to reduce the deficit to the minimum within 12 seconds.

But again the South Division side rose to the challenge and the next four points were all theirs - Liam Boland (free), Ross Mulcahy, Rian Clancy and Liam Boland again pushing the ‘Sky Blues’ 0-13 to 0-8 ahead and looking good.

Brian Jones and Donough Leahy were at the heart of most of Arravale’s endeavour and through hard graft the West Tipp side had the lead back to three points with 12 minutes to go. A long range effort by Donough Leahy, a super point from Mikey O’Dwyer and a James Hogan free inched Arravale ever closer - not forgetting a point blank save by Nicky Cummins from Stephen Quirke which Liam Boland  recycled well to tap over.

And just when it looked like Arravale were gaining control, Moyle Rovers struck a decisive blow. A move through Liam Boland and Rian Clancy set up Ross Mulcahy and the half-time substitute goaled with aplomb. A further Diarmuid Foley point put the Liam Cronin managed side seven points clear with 10 minutes remaining. Arravale Rovers could hardly come back again?

Moyle Rovers with a county final place now in their sights seemed content to play a holding game and in doing so invited Arravale on. A pair of James Hogan frees and an excellently converted 45 by Niall Donovan reduced the leeway to four with five minutes still to play.

Like a swarm of bees Arravale kept coming forward and a glorious chance of a goal by Shane Leahy was blazed narrowly wide .

But amazingly with a minute to play they got the goal they deserved and what a gem it was. A passage was weaved through the Moyle Rovers defence involving half a dozen players before Conor McManus hit a rocket from all of 20 metres to the roof of the net. A real contender for goal of the year!

One point down, a minute remaining - there was still hope of levelling. And Arravale did get that last chance but the opportunity to force extra time was spurned. With Arravale committed to attack, Moyle Rovers broke upfield and when Diarmuid Foley’s initial effort at goal was saved, Peter Acheson, obliged with the rebound. And that was it.

Credit to both sides for a cracking game. The winners just about had the measure of their opponents whose absentees and injuries cost them dearly. But they were never short of fight throughout and if they had worked the draw in the end, no neutral would have begrudged them.

For Arravale Rovers , Nicky Cummins did all he could in goal; Pearse Richardson and the Leahy twins were solid at the back while Niall Donovan and Brian Jones, up against it at midfield, did well. Conor McManus and Mikey O’Dwyer were the pick of the attack.

The winners will be happy with the momentum they have going their way just now. It was a cohesive team effort that will give them confidence for the next day against a star-studded Clonmel Commercials outfit. To a man they produced an excellent team effort but added kudos to Martin Dunne, Peter Acheson, Alan Campbell, Darragh Dwyer, Sean Keating and Rian Clancy for their displays.

Credit also to referee Derek O’Mahony for a well-marshalled game that was allowed to flow well, testimony to the spirt in which both sides went about their business.