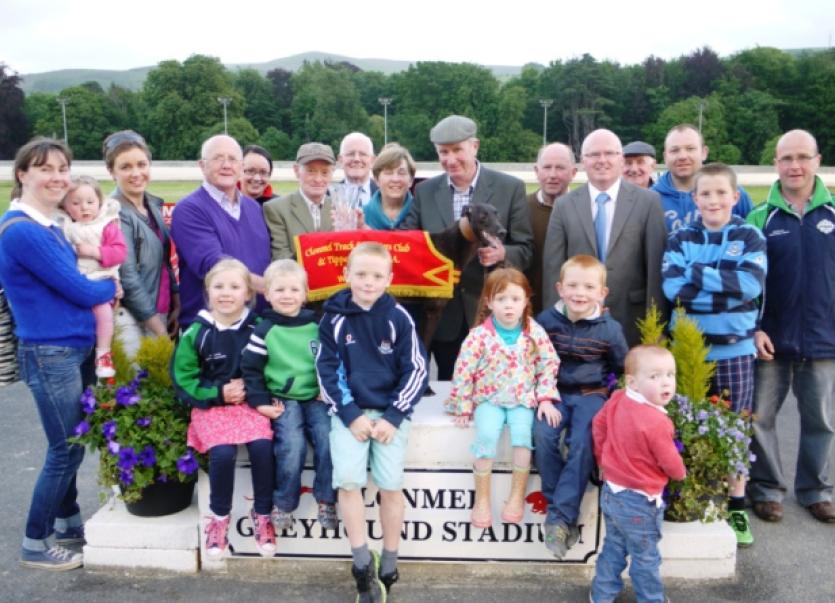 Next Sunday’s semi-finals of The Surehaul/Mercedes/B.I.F. Open Unraced Stake is expected to provide outstanding action by the banks of the Suir as twelve classy young performers battle for places in the €3,000 decider.

Next Sunday’s semi-finals of The Surehaul/Mercedes/B.I.F. Open Unraced Stake is expected to provide outstanding action by the banks of the Suir as twelve classy young performers battle for places in the €3,000 decider.

Soviet Clooney owned and trained by Eamonn Cronin in Kilmallock was the eye-catcher when clocking the fastest second round run of 28.84 last Sunday and looks one of the leading candidates for outright honours.

However Monasterevin enthusiast Tina Cooke holds a very strong hand having chalked up a fine double with Lughill Dano and Lughill Edward who will be joined in the final dozen by Lughill John runner-up to Soviet Clooney in his race. Under Milkwood caused a major upset when taking the trouble strewn opening heat in 30.35 whilst the of the non winners on the night Indigojack who boasts the fastest clock to date for Larry & Jack O’Shea, Owen McKenna’s Fiery Splendour and another O’Shea runner Jacksabullet cannot be ruled out.

The fastest time of the session on Sunday was posted in the concluding Red Mills Getting Out event by the Graham Holland runner Kilbarry Rover which stopped the clock in 28.73 whilst the final of the Slievenamon A5 Stake was won in style by Bate The Sweets who came into the event as a maiden after sixteen runs and ran through the event unbeaten for his Dripsey owner/trainer Ned Barrett.

Race 1 (A2) – The easy to back former open racer Cheerful Lil gained an overdue success by accounting for Haughtyvanpersie by half a length in a race which saw favourite Mr. Brightness baulked on the back straight. Next Exchapter filled third place behind the winner which was gaining a fourth career success. The daughter of Droopys Maldini and Montos Tricks is trained by Maurice Organ for the South Lodge based Blue and Gold Racing Syndicate and her winning clock was 29.54.

Race 2 - The Bet on the Tote Open Sprint.

The layers went 5/2 the field and three runners on that mark filled the top places. Cyclone Sandy led at the first bend and surged clear to defeat Millroad Impact and Rathorpe Scudo by six and a half lengths and two and a half lengths in a smashing 16.11.

Risk of Ice topped the market at 2/1 but lost all chance when baulked round the early bends. Bate the Sweets the only runner unbeaten in the stake was a generous 9/2 chance in the betting and this son of Head Bound and Melwood Pearl led at the final bend and went on to score by two lengths from the strong finishing Moreton Moonglow with Favourite Moment a length and a half back in third.

The winner which was a maiden going into this stake has taken quite a liking to Clonmel and he clocked 29.46 in going through the stake unbeaten.

Indigojack the fastest first round winner was an odds-on chance in the opening heat but a messy event produced an upset and a 5/1 winner in the shape of Under Milkwood whose winning clock of 30.35 underlined the unsatisfactory nature of the race.

The winner got a clear run and led near the line to defeat reserve Glideaway Con and Indigojack by two and a half lengths and half a length following at a lot of trouble round the final bends that saw Turbo Deejay knocked over and the others with the exception of the winner baulked or impeded.

Fiery Splendour was a 4/6 chance to take the second heat but moved off the opening bend from his trap one draw and was always playing second fiddle to 5/2 chance Lughill Dano which led from traps and made all the running to defeat the staying favourite by four lengths with Mountaylor Air a length back in the third qualifying spot.

The 9/4 chance Toystory Aston owned and trained locally by Rory O’Connor gained his fourth career victory by making all the running in the red jacket to account for Mahogany Boy and the favourite Mustang Messi by five lengths and half a length in 28.91 just a spot outside his previous best clock. Races 7 & 8 – Heats 3 & 4 of The Surehaul/Mercedes/B.I.F. Open Unraced Round 2.

This third heat saw Lughill Edward go off an even money chance to complete the Tina Cooke double and the son of Kinloch Brae and Pams Lilly led at the penultimate bend before surging clear of trouble to record a nine length success over Madigans Sammy in 28.91.

Historical Boy finished a short head behind the runner-up in third place.

The final heat produced the fastest time of the round when the 6/4 second favourite Soviet Clooney led at the opening bend and stayed on in fine style to deny the Cooke kennel a treble by accounting for Lughill John by two and a half lengths.

Jacksabullet took the third spot four and a half lengths in arrears of the principals.

At long last the 4/5 chance Kilbarry Rover broke the hoodoo on odds-on favourites when posting the fastest clock of the session in impressive fashion. Trained by Graham Holland for Dunmanway owner Donal Ross the son of Westmead Hawk and Free Kewell recorded his sixteenth career win in defeating Graigues Kaino and Moreton Finale by two and a half lengths and a length and a half in an impressive 28.73.

A fine Thursday card featured the two semi-finals of The Tina Florist/Central Grill A4 Tri-Distance Stake and the final of The O’Rourke Meats & Track Supporters Club A6/A7 525 Stake.

The session produced a beano for the bookmakers who cheered home seven losing favourites, six of them odds-on chances, on an evening when only one market leader, Amazing Joe, an even money shot in the fourth event, came to the aid of the suffering punters.

The Tri-Distance semi-finals were run over the 550 trip and were won by two 3/1 chances General Blaze, which clocked 30.32 in scoring comfortably for Clonroche enthusiast John Kehoe, and Coologue Smokey which proved an equally facile winner for Mooncoin owner/trainer David Byrne in 30.45.

There was a popular local success in the O’Rourke Meats decider when 5/2 chance Splash Molly gained control off the early bends and swept to a five and a half length win to break her maiden and win the nice four figure prize in very impressive style. The daughter of Ace Hi Rumble and Molly Bloomis owned in Clonmel by Richard Brannigan.

The Tina’s Florist/Central Grill A4 Tri-Distance Stake. The semi-finals were run over the 550 trip and in this first leg the jolly was the 4/5 chance and impressive first round winner Gortkelly Bebe which however never showed with a winning chance and emerged with the doubtful distinction of becoming the fifth odds-on chance to be defeated in the opening six races.

The 3/1 shot General Blaze showed good pace to gain an early advantage and he kept on in great style to defeat Chaotic Rose and Strides Panther by three and a half lengths and a length in 30.32.

Suir Millie headed the market at 5/4 but failed to clear the opening bend and local runner Splash Molly led on the rails from Five Sisters and Triangle Ace as they turned down the back straight.

The leader stretched away to record a comfortable success as they crossed the finishing line in that order. Splash Molly was getting off the mark at the fifth time of asking but she had been steadily improving and was the fancy of the race card tipster.

The winning margins were five and a half and one and a half lengths and the winning daughter of Ace Hi Rumble and Molly Bloom posted a career best 29.11 to secure the nice 1,125 euro prize for proud local owner Richard Brannigan.

The odds-on Chicken Skin became the sixth defeated odds-on favourite in a disastrous session for punters.

Graham Holland’s local hope was baulked at the opening bend and although running on to finish third and claim a place in the final he was some seven lengths behind the leading duo Coologue Smokey and Rastafari Duke at the line. The spoils went to the former a 3/1 chance which led at the second bend and stayed well to account for the runner-up by three lengths in 30.45.