Foley makes his Ireland debut a very special one 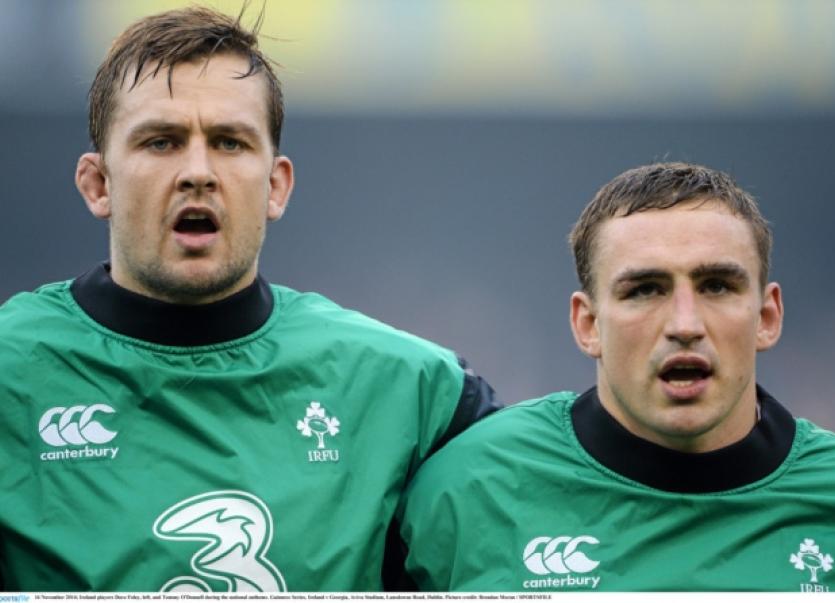 Given his first start in an Ireland jersey by coach Joe Schmidt, the former High School student was determined to take the chance with open arms.

He had an outstanding game in the second row in the huge win over Georgia and was rewarded with his the Man of the Match accolade.

It was a remarkable achievement by the 26-year old who is now a regular in the Munster engine room but the step up to international level is a big one.

But Foley - joined on the team by fellow Tipperary man Tommy O’Donnell - showed he was more than ready for the challenge.

He was immense in the lineout and equally brilliant in open play, with huge bursts that had the Georgian defence struggling to contain. And his own defence was also outstanding

By sixty minutes he had his mark and Schmidt withdrew him - but not before he had done enough to earn his Man of the Match award.

Coming in as one of thirteen changes from the side that beat South Africa was always going to provide a challenge for newcomer Foley but he like so many others on the team posed some questions of their own for Schmidt.

Foley may have put himself in contention for an even bigger challenge next Saturday against the mighty Australians - he would relish the prospect of joining his Munster colleague and team captain Paul O’Connell in the second row - but even if he doesn’t dislodge Devin Toner, he could still be in line for a place on the bench and the likelihood of some action.

Then there’s the Six Nations to come early in the new year followed by the World Cup next autumn.

The Clonmel man has certainly picked a good time to make an impression.

He showed maturity on the pitch and also off it, dealing competently with media demands after Sunday’s win, including unaccustomed television interviews. While delighted with his debut, he suggested it might have come two years ago.

But he wasn’t getting carried away by the occasion despite his delight.

“It was absolutely incredible. I suppose I’ve been dreaming about this since I was a young kid and you never know if you’ll get the opportunity. I won’t be getting carried away with myself and neither will the team. We’ve got a massive task next week against Australia.”

He added that there’s massive confidence in the squad following the two autumn series wins to date.

“The provinces are going very well and Joe is trying to build for the World Cup and trying to get some depth in the squad. I think by the looks of things today he has a bit of depth there and fellas are hungry to play.”

And on a great day for Tipperary rugby, Cahir’s Tommy O’Donnell returned to the Irish team where he put in another typical battling performance in the hugely competitive backrow division that won’t have gone unnnoticed by Schmidt.

Foley and O’Donnell have done the county proud in Munster red and now Ireland green.