Irishtown area of Clonmel holds strong hand in the Derby 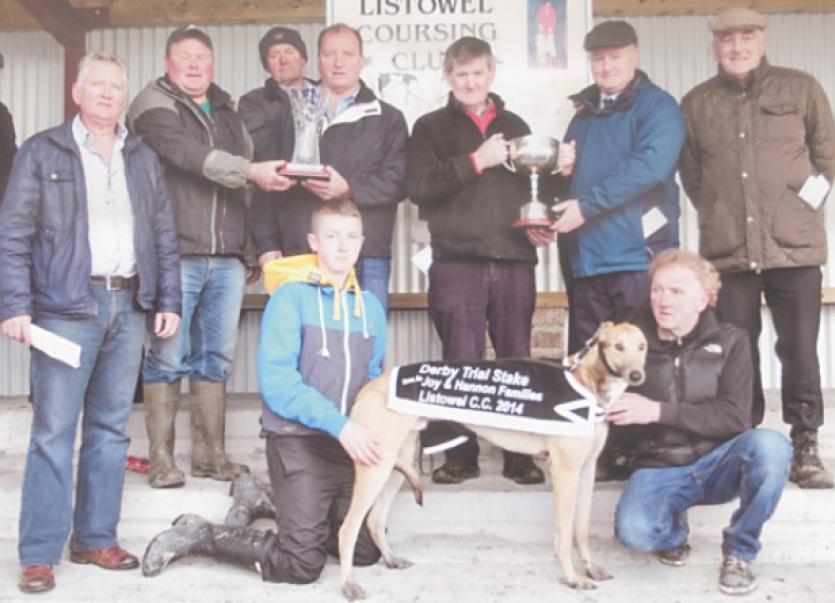 The Irishtown area of Clonmel will make a major assault on the Boylesports Derby, the blue riband event at next weekend’s National Coursing Meeting in Clonmel.

The Irishtown area of Clonmel will make a major assault on the Boylesports Derby, the blue riband event at next weekend’s National Coursing Meeting in Clonmel.

The owners of no fewer than three qualifiers for the event have strong connections to Irishtown.

They include the favourite Crushers Oak, which is owned by David O’Sullivan in Rathronan, Clonmel, the owner of the popular takeaway Miss Ellies.

Serene Angel is owned by the Irishtown Syndicate, which includes Michael Carey, the owner of Carey’s bar, as well as Tony Hennessy and Eddie Ryan and is trained by Michael O’Donovan in Tipperary town, who’s chasing an elusive Derby success; while Stephens Owen is owned by a syndicate that includes another Irishtown resident, Galwayman Brendan Grogan, as well as Pat Sullivan, Donal O’Suilleabhain, Mark Meehan and Micheal McNamara, and which is trained in Clonmel by the McLeans.

They are just some of the local qualifiers for the meeting, which will celebrate its 90th anniversary when it’s staged at Powerstown Park, starting at 11am next Saturday morning, January 31, and concluding with the finals on Monday, February 2.

This is the third year of the three-year trial period that was decided for the staging of the event at the weekend and the indications are that it will remain, according to DJ Histon, chief executive and secretary of the Irish Coursing Club (ICC). Although a final decision has yet to be made he has hinted that the meeting won’t return to its former Monday-Wednesday schedule.

The meeting brings an influx of visitors from all over Ireland, as well as Britain and Europe, who make a significant contribution to the local economy, and DJ Histon says that bookings for accommodation are very strong again this year.

“The hotels are booked out so I imagine anyone seeking accommodation will be looking at b and bs at this stage”, he said.

Mr. Histon was pleased that the weather forecast for the weekend is positive because that is a big factor as to whether people decide to travel, he said.

The festival atmosphere in the town will be enhanced by the meetings held each night at Clonmel Greyhound Track and a horse racing meeting will follow closely on the heels of the coursing on Thursday, February 5.

Other local dogs are also hoping to be in the shake-up for the Derby. Timmie Trickibow is owned by Emily Kearney and trained by Kevin Barry, both from Rosegreen. Kingcormac Fairy, owned by Christy Ryan, was a popular local success when he qualified at the Cashel meeting while Micks Victory, whose names celebrates the success of County Council cathaoirleach Michael Fitzgerald in last year’s local elections, is owned by Darren Byrnes in Golden and trained in Tipperary town by Tim O’Donovan.

That one is trained in Fethard by Margaret and David Flanagan, who have an interest in no fewer than four qualifiers in the Greyhound and Pet World Oaks. They include Clontuohy and Coffee In Spirit, which are both owned locally by the Everards-Flynn-Mallon Syndicate; Knockelly Ann, owned by James Lawrence in Fethard; and Rideout Belle, who is owned by Cheshire-based Andrew Huddleston.

Another local Oaks hopeful is Linden Village, owned by Ian Lovelock in Golden; while Kingtone Jessie, owned by Kieran King and trained by his father Paul King in Clogheen, was a popular qualifier in Mooncoin, after she had been beaten in two previous finals.

Meanwhile, the feature event at the horse racing meeting on Thursday, February 5 is the Surehaul Mercedes-Benz Novice Hurdle, which is worth €31,500. Last year’s winner was Don Poli, ridden by Bryan Cooper and which went on to win the Martin Pipe Conditional Jockeys’ Handicap Hurdle at the Cheltenham festival.

The first race goes to post at 1.30 and the card will also feature a new sponsored race, the Patsy O’Brien Memorial Steeplechase. This is sponsored by friends of the late Patsy O’Brien, who owned The Hill Bar in Ardfinnan.