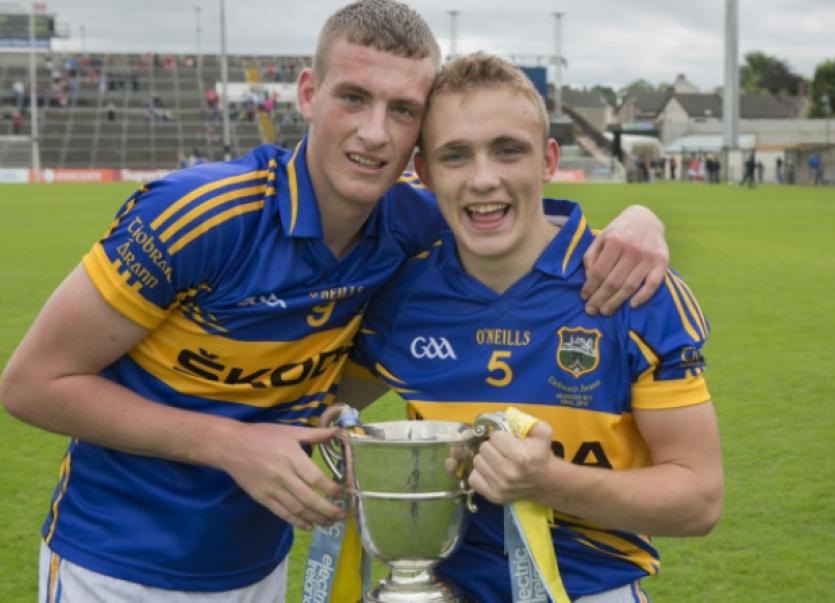 Tipp under 21 footballers take their place in the Munster final this Thursday evening at Semple Stadium against ‘out-and-out favourites’ Cork who are seeking their fifth title in-a-row.

Tipp under 21 footballers take their place in the Munster final this Thursday evening at Semple Stadium against ‘out-and-out favourites’ Cork who are seeking their fifth title in-a-row.

The home side will be vying for only their second win at provincial level since the competition was inaugurated in 1962. On the other hand Cork will be hoping to capture the ‘Corn na Casca’ for a record 26th time.

Tipperary’s only success in Munster came in 2010 when a John Evans managed side defeated Kerry by 1-7 to 1-6 in the final played in  Tralee.

This will be Tipperary’s seventh final appearance in nine years but ominously in that period Tipp and Cork have met in four finals with ‘The Rebels’ winning each and every time. Those defeats came in 2007, 2009, 2013 and 2014, the closest Tipp came to winning was in ’09 when Cork triumphed by a single point 1-9 to 2-5.

On that basis this is the proverbial David v Goliath face-off. Tipp enter the arena as rank outsiders and a mighty effort will be required by Tommy Toomey’s troops if the Cork drive-for-five is to be denied.

Tipp defeated Clare in their semi-final clash at Semple Stadium three weeks ago on a scoreline of 0-15 to 0-7 but it wasn’t the comfortable performance from the home side that many expected. At times Tipp looked out-of-sorts and it was only in the last quarter that they finally pulled free of the Banner challenge.

Reflecting on that performance team manager Tommy Toomey said “We flagged it before the game as we had problems getting all the lads together with colleges games and others in with the Tipp hurlers. But we wouldn’t want to be too hard on ourselves  either with the Clare game. We kicked some fantastic scores on the night and our kicking of points from distance was very impressive. Jason (Lonergan) was our stand-out player but the likes of Steven (O’Brien) and John McGrath also got great scores. John McGrath got a super point in the second half from 45 metres. But we have been working hard since then particularly on our passing game. That Clare game will bring us on a lot also and we will be ready for Cork,” he added.

Of the Cork team who are coming to Thurles on Thursday and looking for a-never-before-achieved five in-a-row, Tommy said: “Cork are a very talented bunch of players and are out-and-out favourites for the final. We will definitely be the underdogs in everyone’s eyes for this game. We know it would be a big fillip for this team and for Tipp football if we could beat Cork on the night.”

“Our lads defeated Cork in their corresponding minor year and we would know them well as players from playing them over the years. They are a very compact side and they come out fast with the ball at every opportunity. They simply defend in numbers and they attack in numbers. It will be our purpose, our intention, to try and knock them out of their playing structure but that is easier said than done,” added the Arravale Rovers clubman.

“They started like that again this year in the semi-final against Kerry and after only eight minutes led 1-2 to no score. No doubt about it Cork will start fast so we must be totally focused for it and we must be very intense in the tackle to try and deal with that,” he added.

As plans for the semi-final were significantly hampered by colleges football and hurling commitments, so too are plans for the final impeded, this time by injuries.

Serious doubts remain about the availability of star player and team captain Colin O’Riordan who was stretchered off in a senior game against Sligo on Sunday week last. It remains to be seen how the JK Brackens man will recover from his concussion. Recent county senior hurling debutant John McGrath, who started at full-forward for the under 21 footballers in the win over Clare, is also a serious doubt with a pelvis injury.

Regarding Colin’s injury in particular, it is very much in the hands of the gods, according to Tommy.

“Colin is beginning to recover. He is resting a lot at the moment and is going through a process of rest first and then only light exercise. And if he is not right after the exercise he will go back to the start and rest more,” added Tommy.

Emphatically, as one would only expect from Tommy Toomey, he stated: “Colin O’Riordan is more important than the game, than a Munster final, no matter what. If the player is not right then it just won’t happen. It’s as simple as that. He has suffered a concussion and is on the road to recovery and the proper people will take a look at the player later. The welfare of the player, all players, takes first priority. There will be no risks taken.”

I finally put it to Tommy that there were no expectations, no pressure, on this team for the final.

“You are right there. There are no expectations or pressure in that sense. The only pressure on us is to play to the best of our ability against Cork. We had a plan in mind for the game but that plan was blown out of the water by injuries to two of our big players and then we had to go back to the drawingboard. It threw all our plans up in the air.

“But we are very impressed with the attitudes of the players, all 31 in the extended panel. We played against the seniors on Tuesday last and we were impressed with the way they performed. We are all improving together and with all the strength and conditioning and training we are making progress in Tipperary football. We are investing in the future also and many of the panel are there again for next year, indeed most of this year’s defence are underage for next year. The work that Mickey (McGeehan), Michael O’Loughlin, Eoghan (Cooney) Peter (Creedon) and Hayley and others put in is exceptional”.

“We will go out and do our very best with a mighty effort and see and see how it goes after that” concluded Tommy.