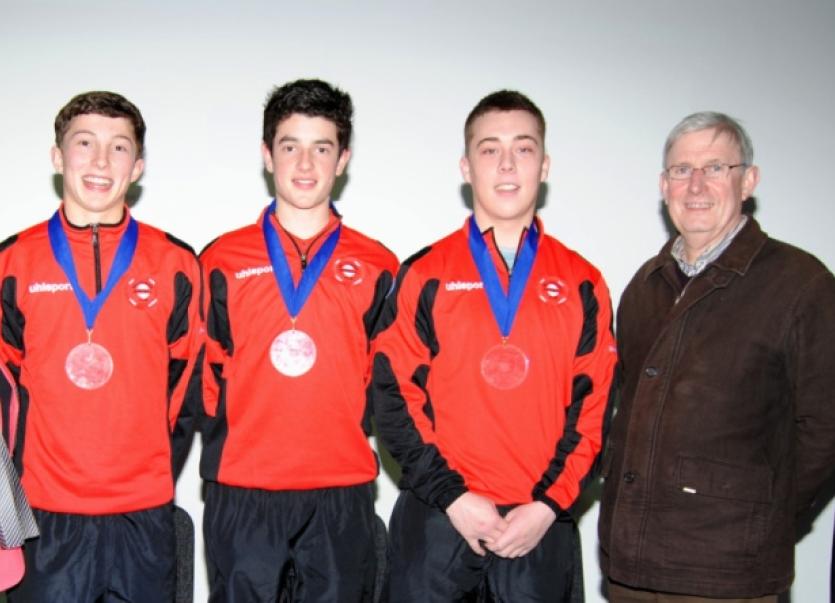 A packed attendance in the local Community Hall welcomed home Ballyporeen’s young handballers from their historic trip to the UHA Junior Championships over the Christmas period.

A packed attendance in the local Community Hall welcomed home Ballyporeen’s young handballers from their historic trip to the UHA Junior Championships over the Christmas period.

After their historic trip to California where they won ten medals and three top divisions, the club held a ‘Welcome Home’ reception in the local hall on Saturday night, 4th January.

It seemed like the whole of the local community came out to honour the seven young competitors who had represented their club, county and country so well on the west coast of America. The seven who competed were Jason Cahill, Adrian English, Jack Coughlan, John Ryan, Ceallach Hennessy, Jason English and Mikey Maher.

The night began with club chairman, Enda Maher, welcoming the large crowd and he spoke of those young lads’ achievements over the years and welcomed each one of them on to the stage.

Martin Neville, on behalf of the Ballyporeen Community Council, spoke of the great success of these young lads and the great experience of travelling to the USA and playing competitive handball at such a high level.

Martin, on behalf of the local Community Council, went on to express delight on these lads’s success for Ballyporeen.

Marie Murphy, a member of South Tipperary County Council, spoke on the great succcess of the club and praised its officers for the outstanding success of Ballyporeen Handball club over many years. The Clogheen-based councillor praised the seven boys for doing so well at the USHA Junior Nationals and wished them well in their future sporting careers.

Each one of the seven competitors spoke of their experiences in America and of competing in the USHA Championships at Los Caballeros.

In turn the club made a small presentation to each one of them in appreciation of their achievements and of the way they so admirably represented Ballyporeen while in the US.

Team manager, Pat Ryan, was called to the stage and received a special presentation from club chairman, Enda Maher, in appreciation of his leadership of the group throughout the campaign.

Pat spoke of the marvellous success of the seven lads and especially of the manner in which they represented themselves, their families, club, county and country while in the USA. He was loud in his praise of their phenomenal behaviour and the way they performed on the courts throughout the championships.

With the formalities taken care of, refreshements were later served in the hall and it was a great occasion and a fitting honour and tribute to the young handballers.

The Ballyporeen Club extends it thanks to everyone who came along on the night to show their support and thanks especially to those who helped to organise the event at such short.

Well done to one and all.