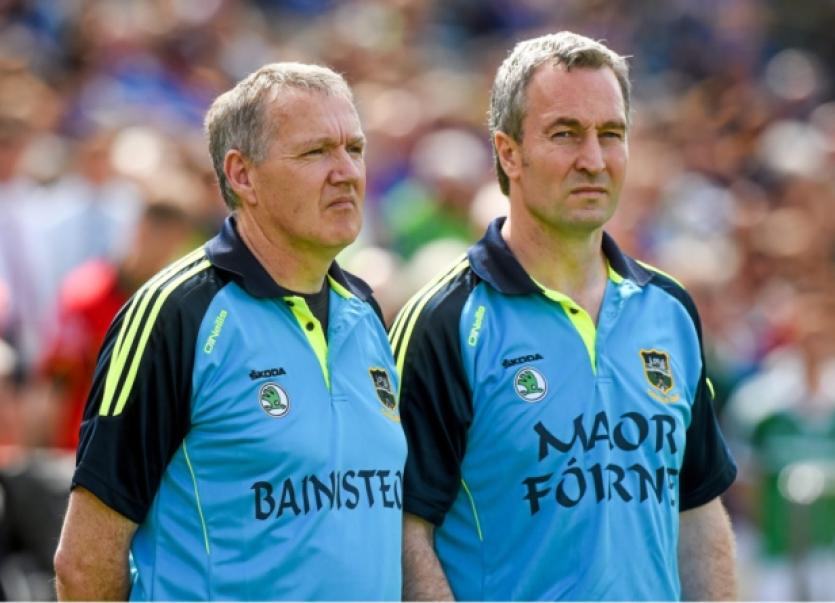 Michael Ryan has been considering the thin dividing line between success and failure in the build-up to Sunday’s All-Ireland Hurling Championship semi-final between Tipperary and Cork.

Michael Ryan has been considering the thin dividing line between success and failure in the build-up to Sunday’s All-Ireland Hurling Championship semi-final between Tipperary and Cork.

The qualifier against Galway on July 5 was a watershed in the county’s season, a game that they won by 9 points but only after Tipp had veered dangerously close to what would have been a fourth successive defeat in the championship in two years and an early exit from the championship for the second season running.

“It was a surreal last 20 minutes, we were 6 points down, could we have taken a 7 or 8-point deficit? I doubt it, to be honest”, the Tipperary assistant manager says. “I think it was right there on the edge at that time, I think if we had to blink we wouldn’t be here. It’s full credit to our guys, they showed up, they got the scores, they used the ball, they used the spaces that we knew they could. It just shows you that goals win matches, and Galway were very close to winning that match.

It was a huge game for us. We were waiting five weeks for a game after losing our first round game to Limerick, which we had targeted 12 months earlier, so we weren’t in a particularly happy place, we badly needed to play.

What was frustrating about that five weeks lay-off was that you didn’t know who you would be playing against, you didn’t have a target until the week before the game. Galway were a massive team, it was a massive game, I was very happy with the way our guys applied themselves that night, it got ropey with 20 minutes to go when we were chasing the game but in fairness the lads played very well.

We chased a game that could easily have slipped away from us and the performance for the final 20 minutes was almost perfect. It gave us a huge sense of satisfaction and obviously relief. It gave something to the fans, it showed them that we were willing to take the risks and even be beaten but once you play, you have to play”.

That victory also removed a monkey from the backs of the management team, who had seen their team lose to Limerick twice and Kilkenny in two seasons.

With their campaign up and running, it was a case of onwards and upwards.

“The games came fast and furious, we had Offaly a week later and then Dublin. They were tricky games, particularly the Offaly one, which was a real banana skin. Offaly play a good brand of hurling, from our perspective you just had to be so careful with it, we wouldn’t have been forgiven if we got caught that night in Portlaoise. It just would have wrecked our year.

It’s just such a finely balanced thing, everyone perceives that you should go through, but tell that to the opposition.

Dublin the last day was a little bit surreal, we expected a much tighter and hard-fought game. There was loads in our own performance that we wouldn’t have been happy with, but we’re here.

You’re always hoping for more, we’re never happy with what we’ve got. We’re capable of playing to a higher level than we showed against Dublin, the trick is to get that level out of yourself. We’re very happy with the preparation but these game are getting incrementally more difficult.”

Difficult doesn’t begin to describe what the team will face on Sunday when they take on the Munster champions and last season’s beaten All-Ireland Finalists.

“This semi-final will be a different task, you’re coming up against a team that effectively played two All-Ireland Finals last year, they had a full campaign that ran until September and this year have made some very good adjustments to their team. To me they look a better side than the side that lost last year’s All-Ireland. We’ll have be at the top of our game to come through. Against Cork we’ll be facing some of the finest players in the game, they will hurt you and they’ll do damage if they’re given too much time and space. Our job will be try and curtail that”.

Tipp/Cork clashes are a part of hurling folklore and Michael Ryan has bittersweet memories of matches against them as a supporter, player and selector.

“Through the 80s they were our nemesis, they were contesting All-Ireland Finals against Galway and Kilkenny. It’s what we grew up listening to, Tipp and Cork, the Holy Grail was to get to a Munster Final and play Cork, and that’s no disrespect to any other county. When I was growing up they were an ever-present menace, to witness the breakthrough in 1987 and the few years after it was absolutely fantastic.

I wouldn’t underestimate the later achievements too, going down to play Cork and beat them in 2008, that was huge, that was unheard of, it was a rarity. It’s the jersey, it’s everything about them and playing them in Croke Park will be unusual and special, but ultimately it will be a hurling match against our old enemy. It should be a great occasion, and we’re really looking forward to it. It’s a top challenge, a huge challenge”.

One of their most famous encounters was the 1991 Munster Final replay at Semple Stadium. A Tipperary team with Michael Ryan at corner back and goalkeeping coach Ken Hogan between the posts won after a terrific struggle, with the help of a famous goal from Aidan Ryan.

“The wheels were off the wagon, it just shows you what can happen in hurling. Cork got off to a massive start and it looked like it was all over but we had quality forwards and we managed to pull it back. My biggest memory is that (Aidan Ryan’s) goal will be disallowed because the crowd had charged onto the field. That was my immediate fear. Tipp fans were in the way of Cork players trying to play the ball out and it was entirely wrong, it was mad stuff, bananas, but a great memory. Aidan Ryan, what a player, he chased down the ball and must have gone through 2 or 3 tackles to get it”.

Now Michael Ryan is on the other side of the sideline, hoping to guide the current team to reach similarly lofty heights.

“The guys are very mature, I needn’t tell you about the sacrifices they make and what it means to them. The Limerick defeat hurt them every bit as much as it hurt us, or the fans, maybe even an awful lot more. You have to be careful how you manage them after a defeat. I told them I didn’t want to see them in the immediate aftermath of that Limerick game because I felt I had nothing to give. I was jaded, we were gutted. It’s not that we didn’t think Limerick were good enough to beat us, it’s that we knew our plans were made firmly about beating Limerick and going through to the Munster Final. But there we were, in this kind of void until some team materialises and you have a target again. It was a difficult five weeks before the next game, and for anyone who’s knocked out in the first round it’s a horrible time.

But if you feel sorry for yourself in this game you’ll be out quicker than you think. You dust yourself down and get yourself organised, you always take a couple of days to re-assess and figure out exactly where we went wrong, what’s the scale of it and what happened here. The reality is we didn’t play to the highest level that we could against Limerick, nor were we allowed, but we were narrowly beaten in a very good game”.

He’s also acutely aware of the expectations of the supporters.

“We’re in the results business, the fairness or the unfairness of it is that the Tipp public demand a team they can follow. It’s not that they expect to win with every team that goes out but they want something to cheer about with a team that plays in the right way and that brings a huge amount of competition to try and win each and every game”.