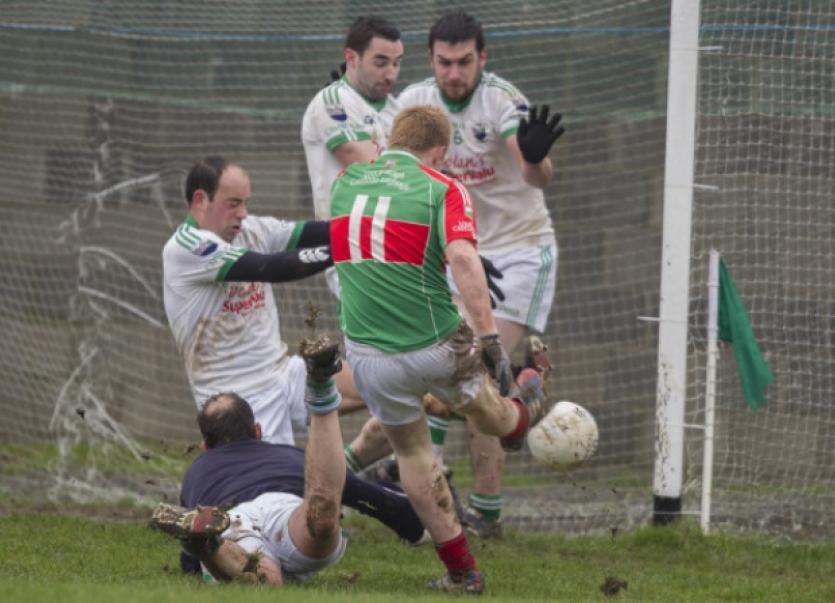 A one-sided opening quarter in which Loughmore/Castleiney totally dominated, ultimately decided the replay of the County SFC Final at Cashel on St. Stephen’s Day.

A one-sided opening quarter in which Loughmore/Castleiney totally dominated, ultimately decided the replay of the County SFC Final at Cashel on St. Stephen’s Day.

After only 16 minutes of football the reigning champions led by 0-7 to 0-0 and with the strong wind at their backs looked as if they might get their hands on the O’Dwyer Cup by half-time.

Amazingly a Cahir comeback almost turned it all around and by the end of another exciting final the challengers nearly snatched victory from the jaws of defeat.

That they didn’t achieve that, or at least force extra-time, came down to three things. Firstly a couple of calls that didn’t go their way, including a point that looked good but was waved wide; secondly, their own profligacy in surrendering valuable possession, often unforced; and thirdly, a magnificent rearguard action by the champions who despite not scoring for 35 minutes held on to record an historic victory for a very proud club.

The replay may not have hit all the high notes of the drawn game, but on a miserable afternoon weatherwise both sides served up an exciting finale to the county’s football year. That all 1,710 were still locked in to Leahy Park at the conclusion bore testimony to that.

Both sides started with one change from the drawn game and the implications were significant. Robbie Costigan’s  absence with a punctured lung, was an immense blow to Cahir. On the other hand the introduction of John Meagher for Loughmore was a huge  fillip as the defender, despite only being on the way back from injury, played really well.

Loughmore returned for the replay the more fired up and blitzed Cahir in the opening quarter with seven points without reply. Noel McGrath at midfield was proving much more effective and John McGrath with a man-of-the-match performance was causing a lot of difficulty for the Cahir defence with his pace and distribution.

The scoring opened with a pointed free by John McGrath after 52 seconds, followed by a fine point from brother Noel in the fourth minute as the champions settled early.

That lead was doubled to four by the eighth minute when Liam Treacy pointed a free from 45 minutes, immediately followed by a John McGrath point after a slow passing movement out of defence by Cahir was broken down and punished.

Both sides then lost a player to a black card in a six minute spell with Liam McGrath and Padraig Whelan taking a walk. Whelan’s loss turned out to be very expensive as the proven freetaker’s absence was screaming out in the second half when opportunites presented themselves.

An Evan Sweeney point and two more frees from  Liam Treacy and John McGrath had the scoreline at 0-7 to 0-0 after 16 minutes with Cahir now on the ropes.

Tom McGlinchey’s side eventually got off the mark with a Dean Lonergan free after 22 minutes but the respite was brief as the two McGraths, John and Noel, kicked points in quick succession for a 0-9 to 0-1 advantage. Incredibly from the 25th minute on Loughmore would not score again in this final.

Punters were now pondering an exit at the interval for some St. Stephen’s Day shopping but a goal in time added on at the end of the first half put paid to that. Sean O’Connor’s attempt at a point fell to Paddy O’Flaherty who swivelled to score a great goal - continuing a run of goals in the quarter-final and semi-final.

Loughmore still went in comfortably ahead at 0-9 to 1-1 but Cahir had some hope now with a strong wind to back them up for the second half.

Despite their lead Loughmore must have been kicking themselves at the break as three good goal chances went abegging in the opening half. Brian Enright denied Cian Hennessy in the 10th minute after being put through by John McGrath. Hennessy in turn set up Eamonn Connolly in the 20th minute but Aidan Casey somehow got back to save a certain goal. Six minutes before half-time a long delivery by Tom King put John McGrath one-on-one with the keeper but his shot hit the crossbar before going over.

Had any of these three chances been converted it would have been ‘game over’ such was the dominance of Declan Laffan’s side throughout the first half.

Early in the second half the umpires made a big call at the dressingroom end when Paddy O’Flaherty’s attempt at a point looked good to many watching from the town side but it was flagged wide.

Despite the early pressure Cahir were getting little joy from the champions but things changed significantly in the 39th minute. A move involving Paddy O’Flaherty and Shane Murphy put Dean Lonergan through and he made no mistake with a superb goal.

Within two minutes the same trio combined to present Shane Murphy with another goal opportunity but this time the effort was blocked by Dominic Brennan at the expense of a 45. Had it gone in it would have given Cahir a lead that an incurable optimist couldn’t have foreseen 10 minutes previously when they trailed 0-9 to 0-1.

The resultant 45 fell well short but Dean Lonergan gathered and with a deft overhead kick pointed to leave just the minimum between the sides with 19 minutes of wind-assisted play remaining.

The momentum was definitely all with Cahir now and anything was possible including, as it transpired, a scoreless conclusion for the remainder of a titanic battle.

Frustratingly for Cahir the one spark of Christmas magic that was needed never materialised as a defiant no-surrender Loughmore/Castleiney defence refused to yield an inch.

Cahir will point to a couple of calls that could have gone their way including a blatant push on Paddy O’Flaherty when 20 metres from goal and another advantage rule call that went against them when play was called back after  Liam Casey was fouled. But overall Sean Lonergan did well as referee in his first county senior football final.

But Cahir had their chances too, including two second half 45s that failed to reach the goal, and almost 20 minutes of wind assisted play in which they failed to find that elusive equaliser.

But make no mistake about it, Loughmore are not county champions for nothing and their amazing spirit came through once more on a day they made club history.

In captuturing their 13th title they had for the first time ever succeeded in retaining the O’Dwyer Cup on the 100th anniverary of their first ever win in 1914 (as Loughmore alone). Proudly 37 year-old captain David Kennedy in his 20th championship campaign for the club lifted the cup for his first time. For a team bedecked in the green and red colours of Christmas it was a fitting finale to a great year.