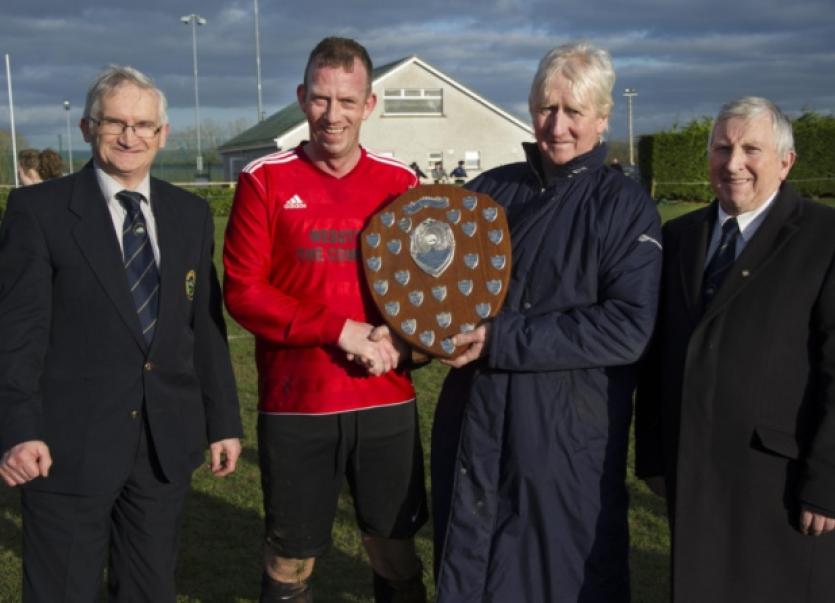 Slieveardagh completed the roster of Shield winners this season with an easy victory over rivals Tipperary Town at Newhill Park in Littleton on Sunday.

The first big chance of the game came after 11 minutes when Ger Ivors was put through and was unlucky to see his effort pushed aside by Tony Black in the Town goal. It wasn’t long after though, that United got the goal that their work deserved when Ian Ivors found himself in space and coolly slipped the ball under the advancing keeper to put his side firmly in the driving seat.

In the 26th minute Slieveardagh doubled their advantage when Thomas Donovan headed the ball home from less than a yard out and a 2-0 interval lead.

In the 65th minute Tipp’s Conor Duggan had a shot stopped by David Cashin throwing himself bravely at his feet. Five minutes later they had another half chance when TJ Ryan drew a save from Cashin, but just as they looked to be getting some purchase in the game, Slieveardagh broke quickly downfield and Ger Ivors found himself alone in the box to crash home his team’s third goal.

Within two minutes Ivors had bagged himself a second with a poacher’s effort when Black dropped a cross into the area, giving the Ballingarry outfit a four goal lead they held all the way to the whistle.

At the end, Slieveardagh captain Michael Ivors complimented his team’s opponents, on their efforts on the day.

Slieveardagh United are looking like they will add more silverware along with promotion by the time they are finished this season.