Comfortable win keeps Tipp in with hope of promotion 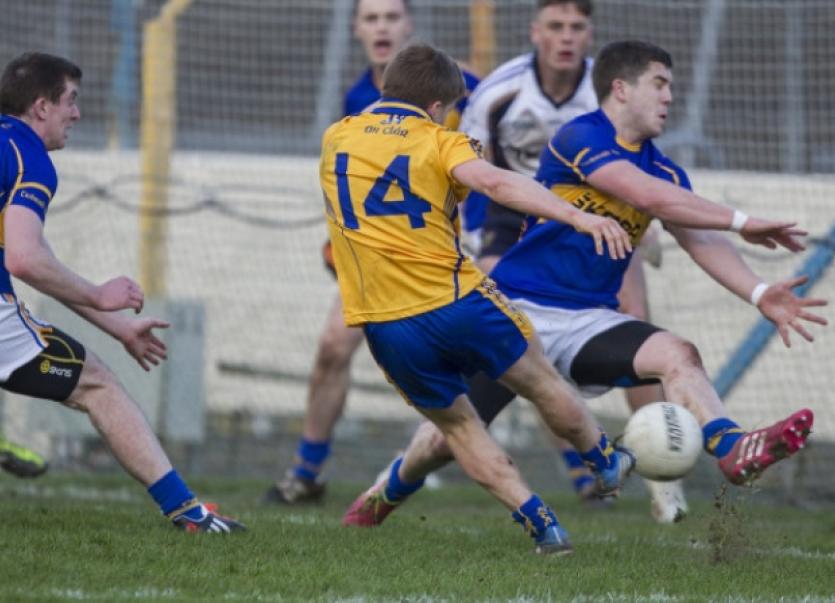 A hard-earned victory over Clare at Semple Stadium on Saturday last putsTipperary footballers’ League campaign back on track with still a slim chance of promotion.

A hard-earned victory over Clare at Semple Stadium on Saturday last putsTipperary footballers’ League campaign back on track with still a slim chance of promotion.

Having suffered two defeats in their opening three games, Tipp desperately needed a win over Clare to stay among the “promotion hopefuls” and a six points winning margin accomplished that. With three games remaining against Louth (a), Sligo (h) and Wexford (h), Peter Creedon’s side are still in the hunt albeit with a little ground to make up.

Clare came to Thurles on Saturday last in impressive form having kicked 22 points against Sligo the previous Sunday. But the visitors came up against a very solid hard-working and hard-tackling Tipp defence and over 70 minutes only managed 1-4 from play. Therein lay the platform for Tipp’s success.

Playing with a strong breeze behind them in to the Town end, Michael Quinlivan opened the scoring after 47 seconds with Tipp’s first point. Quinlivan was later helped off the field after only 23 minutes with what looks like a hamstring injury.

Tipp got a defining break in the 12th minute when a high ball played in by late replacement Liam Casey was punched home by Conor Sweeney from the edge of the square. It gave Tipp a cushion they would hold to the end.

Seamus Kennedy up from wing back, tagged on a great point to put Tipp 1-5 to 0-1 up after 28 minutes. The Clonmel Commercials man had a fine game overall.

The dying minutes of the first half went Clare’s way and three points, two frees by  David Tubridy and another from play by Shane McGrath narrowed the gap to four at the break. Tipp would have been concerned at this late slippage with a strong wind to face after the break.

Clare restarted with a point inside a minute but, even with the wind at their backs, would not score again for a further 23 minutes.

In that intervening period Tipp raised their game considerably to take control.

Barry Grogan got his name on the scoresheet four minutes after the re-start with a well-taken point after good work from Sweeney.

Perhaps the game’s best point came in the 47th minute when a move twice involving Peter Acheson and Philip Austin, ended with the Borrisokane man pointing.

The young midfield partnership of O’Riordan and O’Brien were showing more prominently as the second half developed and O’Brien chipped in with a nice point after good work by George Hannigan to set up the chance.

Ian Fahey was justly rewarded for his efforts with a point of his own in the 54th minute, cutting in from the left wing. It was Tipp’s fourth point in a row without reply.

Barry Grogan with his last kick before being replaced sent a 45 into the wind well over the black spot. At 1-10 to 0-5 with 15 minutes to play it was now looking very comfortable for the home side.

Tipp were knocked back on their heels in the 59th minute when Clare substitute Shane Brennan was played through by Shane Hickey and gave Evan Comerford no chance with a low drive which came back off the stanchion.

Hickey followed up with another point for Clare five minutes later and suddenly it was back to a four points game.

Colin O’Riordan then intercepted a Clare move and his counter attack put Steven O’Brien through for a point. Clare immediately responded with a point from their best player, Shane McGrath.

Tipp made sure of victory three minutes from time. Again O’Riordan won a ball around midfield and put  Brian Mulvihill through on a run. Unselfishly the experienced Moyle Rovers man, when in a position to score delivered the pass for Philip Austin to deftly steer home to the net. Game over!

There was one last piece of drama in the final minute. A Tipp defender was harshly adjudged for a foot block and Clare were awarded a penalty. David Tubriby blasted low but Evan Comerford saved only for the Doonbeg man to point the rebound. “There was no late late show for Tubridy this time.”

Tipp were fully deserving of the win. It was honest, it was workmanlike and it was the result they badly needed.