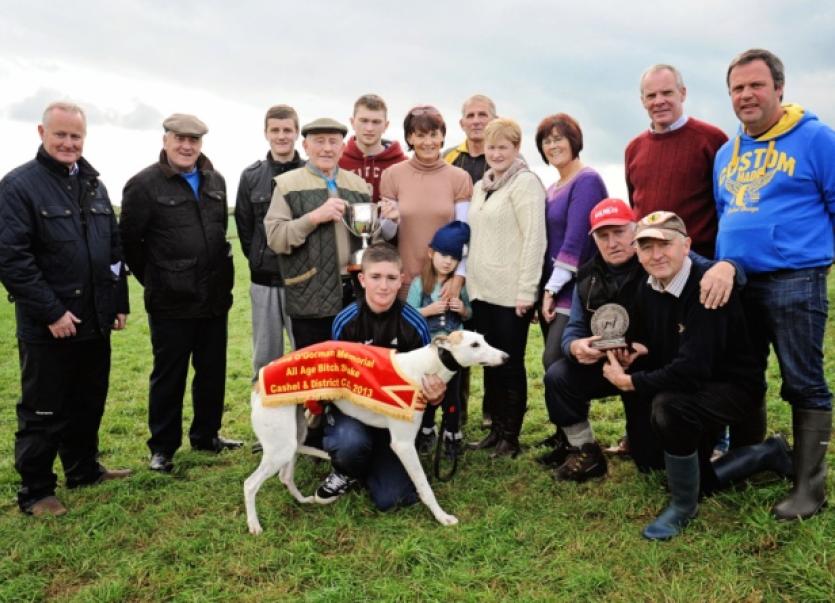 A number of top class performances were posted on an excellent card on Sunday which featured three opening heats in both the Munster Puppy Cup and the Mary O’Reilly & Track Supporters Club A4 Tri/Distance Stake.

A number of top class performances were posted on an excellent card on Sunday which featured three opening heats in both the Munster Puppy Cup and the Mary O’Reilly & Track Supporters Club A4 Tri/Distance Stake.

The fastest run in the puppy event was set by the Owen McKenna trained favourite Fiery Splendour which took control off the early bends before going on to score comfortably in a smashing 28.67.

The other heats went to Mickey Cee Mayo in 29.01 and Killinan Baby in 28.90 and the major upset in the competition was the failure of Derby semi-finalist Hawaii Kinsale to qualify from the second heat.

The opening heats of the Tri/Distance stake were also run over the standard trip and we saw outstanding runs from Strides Panther in 28.99 and Metro Jack in 28.71 before Cloheena Rocco grabbed his moment of glory when getting up to break his maiden at the 21st attempt in the final heat.

On the under card Frances O’Donnell completed a fine double with Mountaylor Air posting an very useful 28.83 and the admirable Skip Soda gaining an 11th career win in 28.94.

Frances and Matt O’Donnell teamed up to get punters off the mark in style with the odds-on maiden Mountaylor Air which proved most impressive in making all the running in the blue jacket to account for Hulla Oscar and Amazing Joe by nine and a half lengths and a short head in a smashing 28.83. The son of Skywalker Ace and Skywalker Angel has taken some time to deliver the goods but now that he has found the winning way he can prove worth following.

Successful in an A3 at the venue last Sunday, Kays Raven stepped up in class and led at the opening turn before proceeding to make the remainder of the running to gain a third career win. Owned and trained in Waterford by Shane O’Connor the daughter of Royal Impact and Coco Nikita stayed on resolutely to defeat Elegant Woman and Glenquain by a length and a half and two lengths in 29.19.

The odds-on Skip Soda completed a quick double for Frances O’Donnell but the ten time winner was given a stern test by runner-up Point Cailin which gave a career best performance. Point Cailin broke fast and led the jolly to the back straight from where the O’Donnell runner set sail for home. Point Cailin to her great credit refused to bend the knee and challenged strongly all the way to the line but had to give best by a length in 28.94. Monabrogue Rock ran on to take third place four lengths adrift of the principals.

The admirable Skip Soda was returning after a break and this wonderful servant for his trainer and owners Tom Smyth and Maurice Jackson still has much to offer.

Funcheon Kudos was market leader but faded to finish fourth as 3/1 chance Strides Panther gave the top performance of his career to date. The son of Hondo Black made every post a winning one and had his rivals in trouble a long way from home. He went on to cross the line seven lengths clear of Invest a Little with Gorky half a length away in third ahead of the disappointing favourite. Owned and trained in Kilsheelan by Alan Brazier the winner clocked an eye-catching career best 28.99 to post his third success.

Only four went to traps and the odds-on Metro Jack trained by Peter Cronin for the father and son duo Larry and Jack O’Shea posted his first success in brilliant style. A member of the useful Head Bound – Blasket Music litter Metro Jack put his rivals to the sword with an all the way win that culminated in a ten length success over Greenane Bolt, Hop Out Tiddles and Kingsmeadow Jesi in a brilliant 28.71.

Just three lengths covered the sextet in a thrilling contest of changing fortunes. Cross of Copper set out to make all and looked like succeeding when still in command from Hold on Tina and Grainne Beag approaching the penultimate bend. Grainne Beag put her head in front on the rails between the final bends and looked all over a winner until Cloheena Rocco finished with a wet sail to lead near the line and win going away by a length from a revitalised Cross of Copper which took the runner-up spot by the minimum margin from Grainne Beag with Hold on Tina taking the fourth qualifying place. Cloheena Rocco, running his 21st race, was gaining a long overdue victory for his patient Cahir connections and his winning clock was 29.42.

The even money favourite Fiery Splendour trained by Owen McKenna for Youghal owner Eimear Coffey set the standard in this prestigious event by leading off the opening bends and forging clear to defeat market rival Sidarian Blaze by three and a half lengths in a fastest of the session 28.67. The winner was gaining a fourth success from six runs and looks the one they all have to beat in this competition. Brae Lane and Scooby the Joker filled the other qualifying places.

Hawaii Kinsale, a Derby semi-finalist, was a hot order at evens but he was soon out of contention and failed to qualify after being badly baulked at the first bend. Mickey Cee Mayo caused an upset by getting up late to head Mustang Messi and score by a length in 29.01. Ardfert Rory and Dodging Bullets finished some five lengths adrift of the leaders to take their places in next Sunday’s semi-finals. The winner was gaining a sixth career victory for joint owners Danny and Michael Cawley.

Killinan Baby and Cuil Cool were inseparable in the market and they had it between them throughout with the former leading at the first bend and holding the strong challenge of her unlucky in running rival by half a length in 28.90. Jacks Ace took third spot five lengths back, a length clear of the remaining qualifier Millridge Lord.

Killinan Baby, trained by Pat Buckley for Thurles owner Joe McIlhone, has an impressive strike rate with nine wins and six places to her credit from her twenty starts.

Trainer Graham Holland rewarded his followers with a hat-trick from his three runners on the night and also took the fastest winner accolade with Riverside Miser which left his rivals for dead by romping to a fourteen length win in completing the kennel double in the second event. This A7/A9 affair saw Holland’s charge go off a 6/4 joint favourite with the Frances O’Donnell runner Scooby Blue but only one dog counted from traprise as Riverside Miser owned in Athassel Abbey by the R-T and C Syndicate powered clear to score unchallenged in 29.12 with Cruise Highway and Roscomroe Ryan filling the minor places. Earlier in the opening A7/A9 the Golden based trainer got off the mark with 2/1 chance Drompark Dover and went on to complete the treble with the 5/4 favourite Kilbarry Velvet in the Red Mills A3 525.

The session featured the semi-finals of the Ann Carew A5/A6 Buster Stake for Bitches which provided two competitive events with the honours going to well supported runners Miss McCann in 29.21 and Bandicoot Hannah in 29.39.

Drompark Dover set the Holland ball rolling but had to recover from a slow start to pick up the long time leader and favourite On Target. The latter looked set for victory but the warning signs were up between the final bends as Drompark Dover finished much the stronger to win going away by a two length margin with Toss Lily two and a half length back in third place. Owned by Jerry and Catherine in Dunmanway the winner a son of Evons Murralli and Brogan Diann stopped the clock in 29.47 on his second career run.

Boherna Scolari led from traps and with all runners in trouble at the opening turn Schweinsteiger and Boherna Scolari pulled clear of their rivals. Despite taking a very wide course Schweinsteiger asserted to score by a length and a half with the favourite Joes Flying Bolt third home some six and a half lengths shy of the principals. The winner a son of Ciaras Turbo owned and trained by Kathryn Ryan in Cashel clocked 16.81 to gain his first winning bracket at the seventh time of asking.