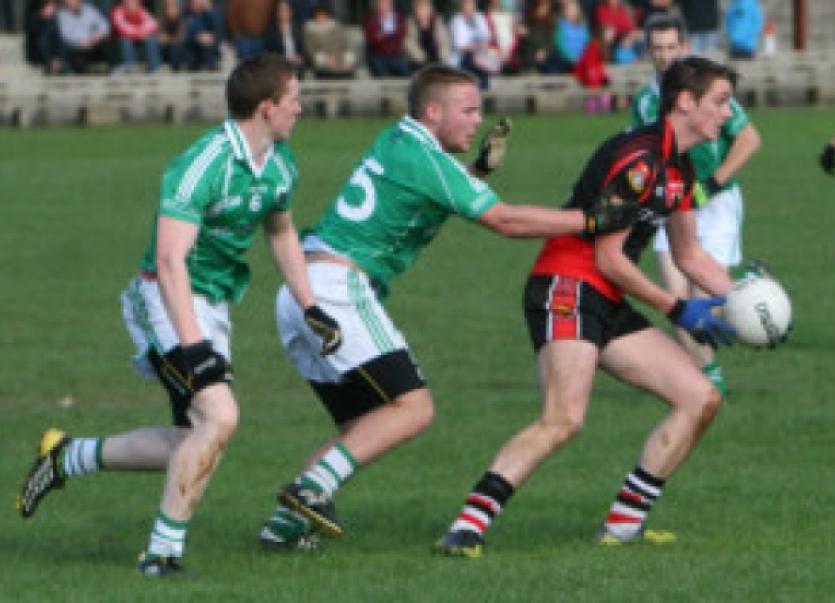 They will winter well back Ballyporeen side this year with the County Intermediate Football silverware firmly in their grasp and the prospect of senior grade football once again come next spring.

They will winter well back Ballyporeen side this year with the County Intermediate Football silverware firmly in their grasp and the prospect of senior grade football once again come next spring.

At the final whistle on Sunday morning last at Holycross, an emotional mixture of great joy and relief erupted. This win was a long time coming. After many heartbreaking near misses over the years Bally’ were county intermediate champions once again for the first time since 1992.

Sunday’s final served up a great battle and last year’s county junior champions Borrisokane put it up to the favourites right throughout. In both halves the lead swung either way twice, and with nine minutes to go Borrisokane were two points to the good and looking likely winners. But when their backs were to the wall Ballyporeen rallied to answer all the questions.

Driven on with spirit and experience and the pain of hurt felt too often the South Tipp side rattled off the game’s last six points for a fully deserved four points triumph.

At half-time Bally’ playing against a stiff breeze led 1-5 to 1-4. Borrisokane had grabbed the initiative very early with a second minute penalty from their county star Philip Austin. On 14 minutes Darragh Lyons scored a well-taken goal for the South champions following an accurate long pass from defence from Shane Molan. Lyons with an overall contribution of 1-2 was Ballyporeen’s most prominent player in the first period.

Borrisokane regained the lead in the 47th minute when full-forward Colm Larkin finished off a great move with the ball crashing down off the crossbar over the line (sub Shane Stapleton making doubly sure, just in case). When Austin doubled that lead to two Bally’ looked threatened. But cometh the hour cometh the man, and the men in red and black duly responded.

They finished with six unanswered points in eight minutes, two from Conor and three from Tommy Sweeney and a well-deserved white flag for hard-working sub Danny Barrett with the last score on a great day for Ballyporeen.

Besides those already mentioned Bally’ had good showings from Eoin Morrissey, John Martin, the O’Callaghans and Eoin Kearney.

For Borrisokane Philip Austin was magnificent, assisted by Brian Davis, Seosamh Cleary, a lively Gordon Harding and Colm Larkin. They can take some consolation in that they added to what was an excellent county final.