Great year for Loughmore and St Michael’s recognised with awards 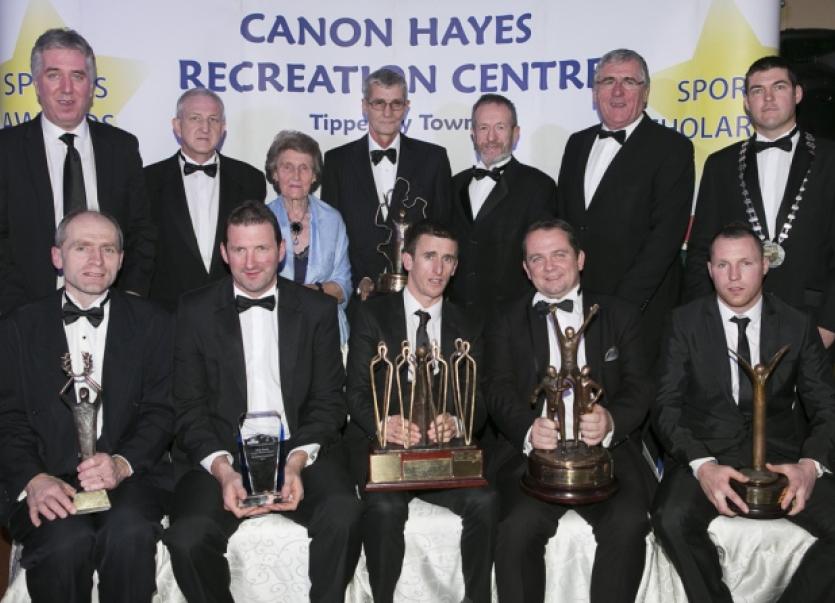 With Davy Fitzgerald clinching the national award, there was also huge interest in the county and local awards at the ceremony in Tipperary.

With Davy Fitzgerald clinching the national award, there was also huge interest in the county and local awards at the ceremony in Tipperary.

Loughmore-Castleiney were honoured with the county award for their historic county double in hurling and football, an achievement not just unique in Tipperary but nationwide.

Meanwhile the local award went to three St Michael’s FC players, James Walsh, Chris Higgins and Paul Breen, who were on the Irish team that won the International Quadrangular Cup.

All the awards on the night were presented by Minister of State Tom Hayes who paid glowing tribute to the work of the Canon Hayes Centre in its promotion of sport.

The man after whom the centre was named, Canon John Hayes, would have been proud of its endeavours. He had been parish priest in Bansha during difficult economic times for the country and through the efforts of groups such as Muintir na Tire, had helped the country to recover, Minister Hayes said.

And to keep the sports centre going for the past twenty five years was a tribute to the philosphy of Canon Hayes, he added.

He congratulated all the winners and said their successes were testament to what could be achieved by hard work, determination and sacrifice.

He also paid tribute to the winners’ families and local communities who had helped to mould the raw material into sporting accomplishments.

Centre chairman Martin Quinn described the awards as the most prestigious of their kind in the country as they encompass all sporting disciplines and are a true barometer of the sporting year.

Completing the double had always been something at the back of the club’s mind and it was a great honour to achieve it. Loughmore had won two hurling titles and eleven football titles in the past but never on the same occasion.

“And we won’t rest on our laurels” he said as a warning to rivals in both codes.

Runners up in the county award were Clonmel athlete Sean Tobin and Thurles showjumper Gred Broderick.

Tobin has enjoyed a wonderful season with remarkable performances for his school, club, county and country.

His award was accepted on the night by Clonmel AC chairman Albert Doyle.

Greg Broderick also had a magnificent year, the highlight of which was winning the gold medal at the World Breeding Championships in Belgium. He is also the national grand prix champion. His award was accepted by his father Austin.

Tipp town side St Michael’s have been one of the top junior clubs in the country for years and that record was recognised with the selection of three players on the Republic of Ireland side that won the International Quadrangular - with James Walsh captaining the side.

Accepting the award, Chris Higgins said it was a magnificent achievement to get three players on the team and equally impressive for Ireland to win the competition without conceding a goal.

She is currently training with the emerging Irish Ladies 15s squad and also with the Senior Sevens. She is also a very successful athlete winning Munster and All Ireland medals in long jump and running.

The Cappawhite ladies senior team won the county championship for the third year in a row.

They also qualified for the Munster Club Senior ‘B’ championship and won the Munster Seven Aside Plate final.

Four of the team were also on the Tipperary intermediate team that reached the All Ireland final. Their award was accepted by player Helen Kennedy.