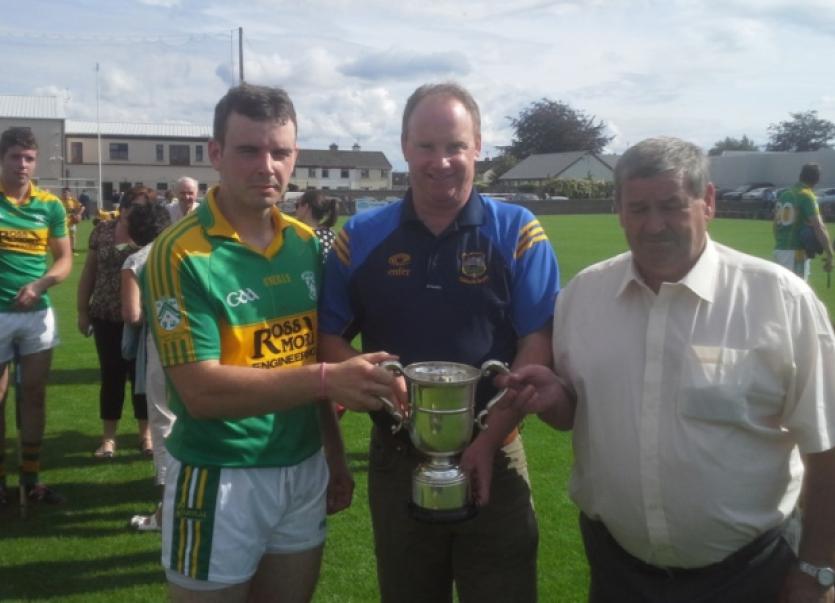 Clonoulty Rossmore captured their second Gleeson Concrete West Junior A Hurling title in three years when they defeated the 2013 champions, Kickhams, in an entertaining final in Golden on Saturday last.

Clonoulty Rossmore captured their second Gleeson Concrete West Junior A Hurling title in three years when they defeated the 2013 champions, Kickhams, in an entertaining final in Golden on Saturday last.

Clonoulty were first off the mark with a Mikey Ryan (W) point after two minutes. Jamie Molony followed up with another before Peter Comerford had Kickhams opening score from a placed ball on twelve minutes.

Tommy Lyng got the first of his nine points from a free on seventeen minutes as Clonoulty got slowly into this game dominated the opening half. So dominant were they that they could afford the luxury of having ten wides during this period. They had some great points from Paddy Ryan and Liam Devane from midfield and Aaron Ryan (R) and Ciaran Carroll. Kickhams depended on Peter Comerford who survived on scraps as Clonoulty’s half backs and midfield were dominant. Clonoulty led at the break by 0-10 to 0-04.

Kickhams were quickly into action in the second half and after twenty four seconds Alan Horgan had the ball in the Clonoulty net. Peter Comerford hit two frees to leave the minimum between the sides. Tommy Lyng pointed his forth free and Paul Hayes goaled for Clonoulty to stretch the lead to five after six minutes. Pa O’Brien pulled one back for Kickhams.

However during this period, which lasted all of ten minutes, much to the bewilderment of the crowd, Kickhams hit two consolation goals from Aidan Heaney and Alan Horgan as Clonoulty held out for victory.