Defeat to Galway brings Tipp football year to an end 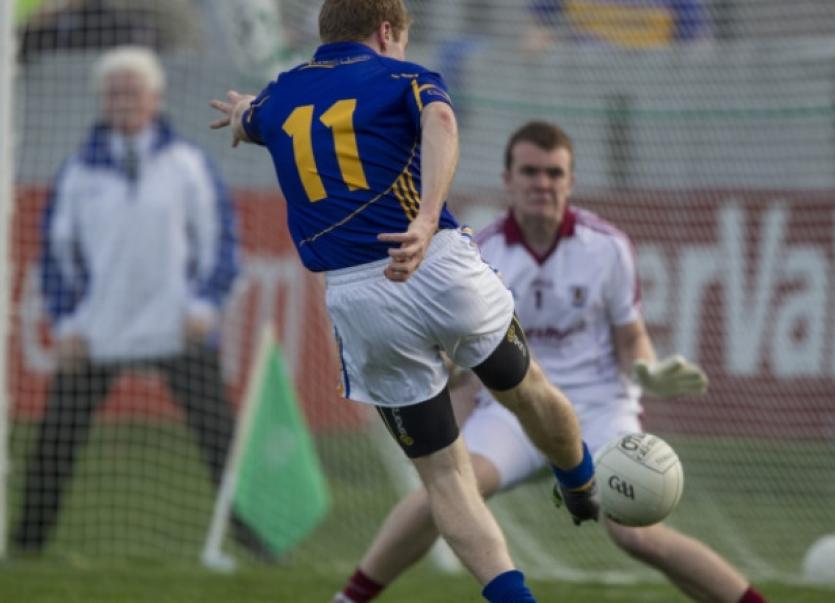 An eight minute spell either side of half-time in which Tipp disastrously leaked four goals put an end to their championship dreams for 2014.

An eight minute spell either side of half-time in which Tipp disastrously leaked four goals put an end to their championship dreams for 2014.

One feared right then that what has been a good year for Tipperary senior football could descend into something akin to a meltdown, but credit to Tipperary they never lost their will to fight back. At the referee’s full-time whistle the margin was reduced back to just five points. Indeed Tipperary shaded the second half by a point despite conceding 2-1 to Galway on the resumption. Credit where credit is due for such honesty.

Afterwards there was understandable disappointment among the Tipp players and backroom management. The disappointment seemed to be two-sided. The defeat in itself was understandable as inevitably it was bound to come in the championship when competing amongst the country’s best teams. What hurt more was the unexplained disappointing performance where Tipp never matched the level of some of their earlier games on a day when they most needed to.

Analysed out to the full, for Tipperary footballers to be so gutted at losing to Galway in a Round 4 qualifer, with a last eight Croke Park date for the winners on offer, is indicative of the progress of Peter Creedon’s side this year. When the initial disappointment of the Tullamore defeat fades there can be much optimism, if the lessons learned and the experienced gained, is put to proper use for next year and beyond.

As one moves up the food chain in Gaelic football the tests inevitably get stiffer, it becomes more difficult to break down opposing teams and, as Tipp learned to their cost on Saturday last, mistakes are clinically punished at a far higher rate than down in Division 4. But this is where Tipperary football wishes to be and these realities come with the territory. It is a good complaint to have.

Tipp started well within themselves against Galway and the sides were level three times in the first 15 minutes following two good points from Peter Acheson and a Conor Sweeney free to match points from Paul Conroy, Michael Martin and Danny Cummins for Galway.

Two quick points - from Steven O’Brien from 35 metres and another long-range effort from Barry Grogan put Tipp two clear at 0-5 to 0-3. The pacy Michael Lundy pulled a point back for Galway in a move where the Westerners for the first time exposed Tipp for pace, worryingly.

Colin O’Riordan, perhaps Tipp’s best on the day, put Tipp two to the good with a lovely point in the 21st minute but they would only score one further point in the 17 minutes of play that followed to half-time. That Tipperary point was a fine effort from Michael Quinlivan.

Michael Conroy and Shane Walsh - with a delicate piece of skill when dealing with a wayward 45 - had points for Galway to level.

The injury of Ger Mulhair at this stage through injury was a big loss as he was doing well on Michael Lundy.

In the 32nd minute Tipp conceded their first goal. Barry Grogan was adjudged by the referee to have charged into a tackle when in possession of the ball. The resultant free was worked through and midfielder Fiontán O Curraoin finished a flowing move with a low shot to the net.

The second goal just before the break came when a weak handpass from Michael Quinlivan was intercepted and the speed of the Galway attack caught Tipperary, and Galway’s other midfielder Tom Flynn blasted home.

As happened against  Laois two weeks ago, Tipp conceded two early goals right at the start of the second period.Inside 45 seconds Danny Cummins smashed home their third goal after an intricate build-up, and two minutes later Galway took advantage of a cheap Tipp turnover and Michael Lundy gave Paul Fitz-gerald no chance for No. 4.

Galway stretched that lead to 14 points at 4-11 to 0-9 with just 10 minutes of the second half played - the Tipp points coming from Colin O’Riordan and George Hannigan.

A Conor Sweeney free was followed by a great goal from the ever hard-working Brian Fox who was set up by Barry Grogan. Fox was perhaps lucky to be on the field when getting a yellow card a few moments earlier when a black card was expected at the time.

Not so fortunate with the colours was Steven O’Brien who was unlucky to be black carded halfway through the second period to be replaced by Hugh Coghlan.

Galway’s margin was still at 10 points with 12 minutes remaining with the likes of Shane Walsh and influential sub Sean Armstrong tagging on points to another Conor Sweeney free.

Sub Brian Mulvihill made an instant impact with a smashing goal made in Monroe following a pass from clubmate Peter Acheson. Acheson himself was denied a green flag moments later by a super save from Thomas Healy.

The spirit and determination of Tipp continued with a third goal in the 66th minute involving Sweeney and Hannigan before young Colin O’Riordan smashed home an unstoppable effort to make it 4-15 to 3-12.

After Shane Walsh and Armstrong again added points Tipp had the final score of the day when a Hugh Coghlan effort was footblocked by Galway’s full-back Finian Hanley. Up stepped Ballyporeen’s Conor Sweeney with a penalty high into the net.

Tipp were beaten but their fightback showed a lot of character and spirit. They have come a long way this year and make no mistake there will be better days ahead.