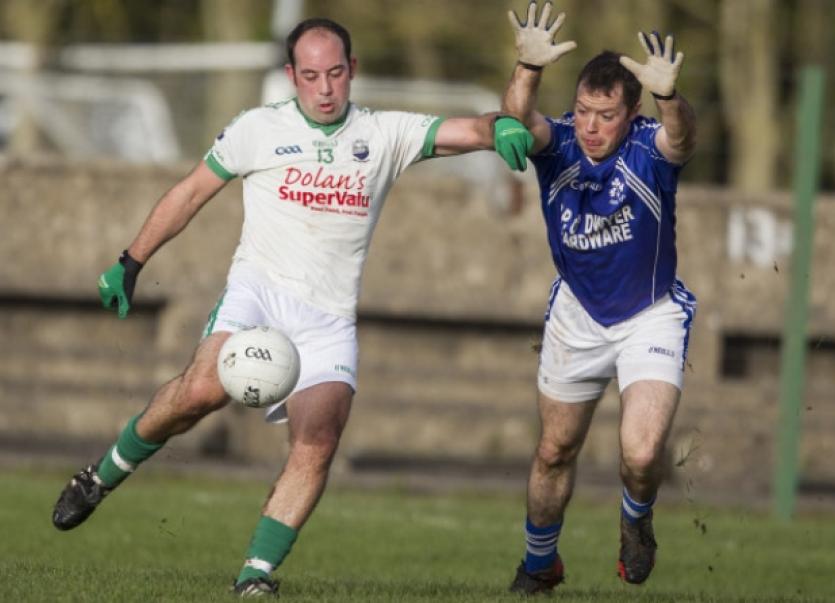 By far the better footballing side, Cahir were sailing on calm waters with a nine-points advantage as the half-way stage of the second half approached. However, they ran in to a five-minute storm in which they conceded 2-2 without reply, and it took all of their craft and experience to steady the ship once more for the eventual victory.

Overall though they can be well satisfied with a spirited and battling performance in which they upset the form book to earn themselves a place in the county senior decider for the first time since 2008. On Sunday next, against Loughmore/Castleiney, they will be hoping to capture the county crown for only the second time in the club’s history to go with the win of 2003.

Cahir will start as underdogs against the reigning county champions and they will relish that challenge too. No doubt, there is a  tremendous battling team spirit flowing through Tom McGlinchey’s men right now and they are definitely improving Sunday after Sunday. Now they find themselves just 60 minutes away from the  coveted county crown and they will give themselves every chance of proving the pundits wrong again on Sunday next.

Unchanged from the previous Sunday’s quarter-final replay win over Eire Og,  Cahir were first to score when  Benny Hickey kicked a fine point from 30 metres out after seven minutes.

Cahir had a let-off a few minutes later when county player Philip Austin broke through on goal only to be fouled for a free that yielded nothing. However, there was no such luck in the 14th minute when the South side suffered a double blow. Midfielder George Hannigan got on the end of a good MacDonaghs move only to be taken down in the square by Eddie Kendrick. Referee Sean Lonergan flashed a black card and Gordon Harding flashed the resultant penalty to the net past Eddie Enright. It gave the North combo side the lead for the only time in the game.

Instantly and impressively Cahir responded with a goal of their own. A flowing movement started by a fine run through the middle by corner-back Conor Casey moved through the hands of Padraig Whelan and James McGrath before centre-forward Paddy O’Flaherty finished in style with a palmed effort past the keeper.

Spurred on, Cahir began to play some nice patches of football working all channels trying to break down the MacDonaghs defence, but with little reward.

Benny Hickey and Darragh Egan exchanged frees and after 22 minutes Cahir were still just a point ahead having had by far the better possession.

In the six minutes or so before the break Cahir rallied, against the breeze, and doubled their tally.

Padraig Whelan got on the end of a Benny Hickey effort that fell short to fist over a point before a good move between Dean Lonergan and Shane Murphy saw the latter rattle the net. Right on the stroke of half-time Whelan mopped up with a point after Jim McDonnell had made a fine save from a Liam Casey effort on goal.

The Northerners, county champions of 2011, needed to make a flying start to the second half to get back into the game. However, by 43 minutes Cahir had further stretched their advantage to nine points at 2-8 to 1-2.

Two minutes after the restart Sean O’Connor and Conor Casey overlapped up the field from defence before Casey kicked a nice point.

McDonaghs got a point back with a Darragh Egan free after 39 minutes but the next three scores were all for Cahir.

Paddy O’Flaherty, putting in another good performance, kicked a point from 30 metres after good work by Dean Lonergan, followed by another similar type point after Sean O’Connor fed Padraig Whelan to score his third point of the day. Sandwiched between these two was a tight angled free from Benny Hickey.

Thomas MacDonaghs looked dead in the water, nine points down and having failed to score from play in 43 minutes of football.

Suddenly, they came alive and had their own spell of dominance that usually comes at some stage in every game.

Between the 34th and 39th minutes they scored 2-2 and suddenly found themselves just one point adrift with 10 minutes to play.

Following Darragh Egan’s third free of the day, dual county minor Alan Tynan, just on the field as a substitute, got on the end of a Philip Austin shot for an unorthodox goal.

Bouyed up, MacDonaghs began to come at Cahir in waves and Philip Austin finished a four-man move he  initiated himself with a point to narrow the gap further.

And it got even better for Eamonn Kelly’s side on 49 minutes when Kildangan’s Joe Gallagher soloed through the middle to blast home his side’s third goal. At 2-8 to 3-4 Cahir were suddenly all at sea again.

Tom O’Gorman, on as a temporary sub, made an instant impact when winning a free and Benny Hickey, under pressure, kicked the score out of his hands from 35 metres to nudge the gap to two.

A minute from time Darragh Egan kicked his fourth free of the day after Mikey O’Connor, fouled. The game was on a knife-edge now and extra-time was a serious possibility. After George Hannigan was black-carded for dissent,  Cahir came good at the death - a nice move through the middle involving Tom O’Gorman and Paddy O’Flaherty set up Johnny McMahon who obliged with the white flag.

Cahir were victorious 2-10 to 3-5 and satisfied to have steadied the ship after a difficult time of it midway through the second period.

Once again it was an all-round team effort from  Cahir. Gerald Halley did a good man-to-man job on an injury hampered Philip Austin while Mikey O’Connor and the Casey brothers were also solid in defence. Padraig Whelan took his scores well while Paddy O’Flaherty’s inter-linking play was very effective. Benny Hickey stood up to the challenge when needed at vital stages while captain James McGrath ran himself in to the ground before substitution.

MacDonaghs, not helped by Borrisokane’s extra-time draw the previous day, and short a few due under 21 hurling, nearly rescued an almost hopeless situation. For them Ray McLoughney, Peter McSherry and Joe Gallagher tried hardest but overall they looked a tired team on the day.