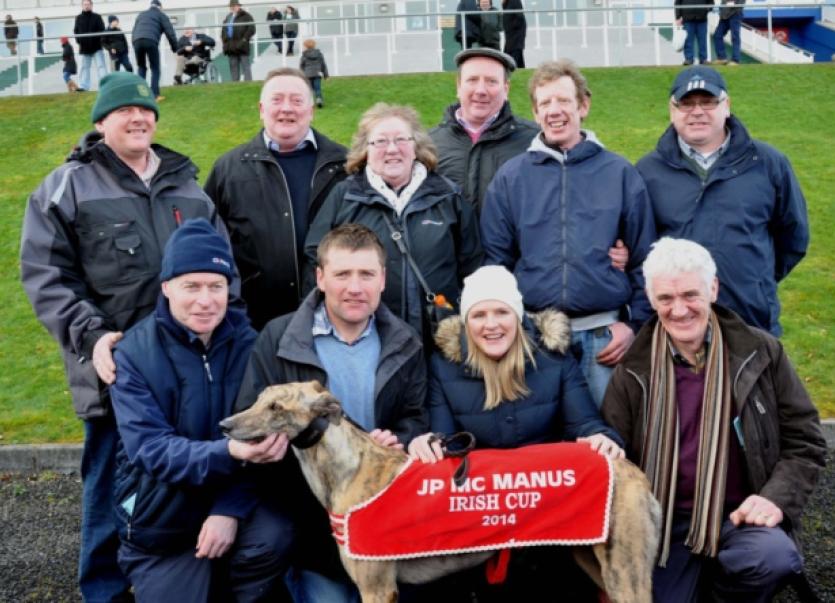 It was history in the making for nine families in New Inn last weekend when they took their all-age dog, New Inn Wonder, to the 2014 JP McManus Irish Cup in Limerick.

It was history in the making for nine families in New Inn last weekend when they took their all-age dog, New Inn Wonder, to the 2014 JP McManus Irish Cup in Limerick.

New Inn Wonder is trained by Owen McKenna and Damian Lonergan and was bred and reared by Shari-Anne O’Donnell, New Inn.

After winning his cup impressively in Mooncoin, confidence was high.

The ante-post favourite, Newinn Wonder, justified his odds in no uncertain fashion in the 2014 JP McManus Irish Cup. This litter brother of last year’s Derby winner, Thomas the Tank, was as impressive a winner as we have seen in this time honoured classic.

He really never gave his connections a moment of worry in any of his six rounds. The only time their hearts may have skipped a beat was when he drove in at the first turn in his semi-final and took a tumble.

However we should not forget the gallant pup Eshwary Leader who was a most worthy finalist and do not be surprised if he makes an appearance on the winner’s podium at Clonmel or Patrickswell in 12 months time.

He beat two very accomplished all-age dogs in Latest Trick and Mr Blonde in the opening two rounds but Newinn Wonder was always going to prove his toughest test and so it turned out.

The winner had a comfortable win over Wyken Power in the quarter-final and when he took the ground of Fleetwood Nova early in the semi-final, forcing his opponent to change sides, there was only going to be one result.

The final was very close for the first 50 yards but when it became obvious from the stands that the red collar was starting to pull away, the New Inn All Over Syndicate got into full voice and roared their champion home.

Delight too for winning nominators Countess Dunraven and her daughter Lady Anna.

This was a dream come through for the syndicate after their disappointment with this dog in Powerstown last year when he had no luck in running.

Emotions ran high in the aftermath of the judge raising the red flag in the final confirming Newinn Wonder as the champion and winner of the prestigious Irish Cup.

Congratulations to this fun loving and sporting syndicate, well done to Owen and Damian for this great training feat and hats off to the great travelling support.

Shari-Anne O’Donnel said that after their disappointment in Powerstown last year where the dog got a lot to do which took him out of the Derby early, they had a tired dog for the Irish Cup.

“We took him home where he recuperated well and we knew come August he was ready to go to the gallops with our Labrador Rocco”.