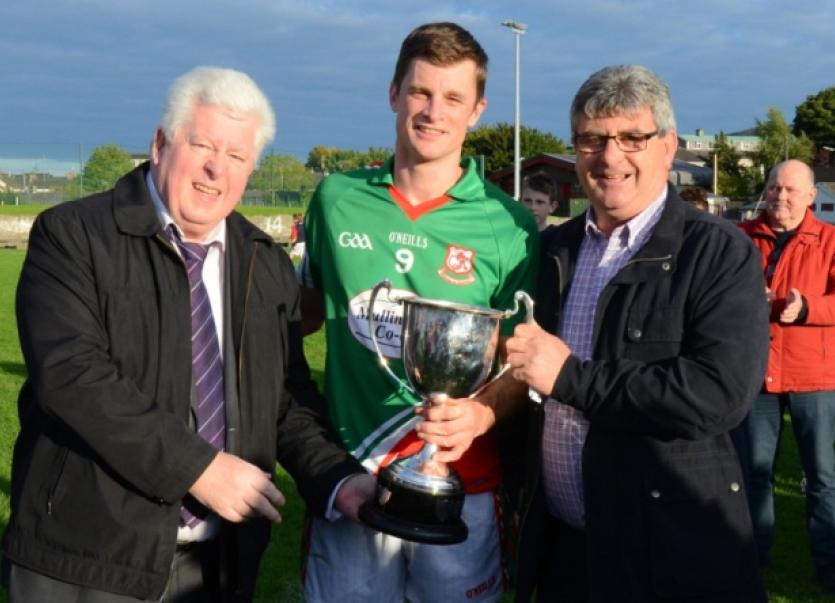 Mullinahone upset the odds to win the Clonmel Credit Union South IFC title with a 2-8 to 0-8 win over Clonmel Og in the final at Davin Park, Carrick-on-Suir on Saturday.

Mullinahone upset the odds to win the Clonmel Credit Union South IFC title with a 2-8 to 0-8 win over Clonmel Og in the final at Davin Park, Carrick-on-Suir on Saturday.

Mullinahone started without the absent Eoin Fennelly and the injured Eoin Kelly. They were replaced by 2011 captain James Connolly and under 21 player, Micheál Dunne. For Clonmel Óg, Dwayne Burns replaced Ciaran Barrett. A respectful silence was observed before the game began for former Tipp player, Eddie Connolly, and also for the Davin Park groundsman, Martin Henzey.

Mullinahone drew first blood in two minutes when Sean Curran pointed a free which had been brought forward for “backchat”. Dwayne Burns pointed a free to put the sides level a minute later. He did the same on seven minutes and in between Johnny Cagney had pointed for Clonmel as they started the better.

In the 10th minute wing back Kevin Walzer pointed for Kickhams as they found their feet. On 13 minutes the speedy Graham Horan pointed to level. It was game on, but within a minute came a seminal moment. Sean Curran, one of Mullinahone’s most influential players, was injured as he tried to point them into the lead. He failed and worse still, his injury forced him to leave the field. Mullinahone responded to adversity and Kevin Walzer led from the front to point, putting the Kickhams into the lead on 19 minutes. At this stage, the Mullinahone backs were making it very difficult for Óg to score. On 26 minutes Graham Horan failed with a Mullinahone free and before half time Dwayne Burns pointed twice to give Clonmel the half time lead 0-5 to 0-4.

Five minutes into the second half half, Michael Lonergan made a great save in the Mullinahone goal. He conceded a free which was pointed but a goal had been prevented. Two minutes later Paul Kelly pulled back that point from a free and in the 9th minute came a third seminal moment. Clonmel centre back Conor Morrissey was injured and had to leave the field. Clonmel were unable to respond to adversity with the same fortitude as Mullinahone had.

Kevin Walzer levelled the score with a well pointed free. In the 10th minute came another of those moments. Paul Kelly found Jack Shelly who parted to Enda Keane and the 16 year old player cracked the ball to the net for the game’s first goal. A minute later Kevin Walzer had another point to increase the lead to an important four points.

Six scoreless minutes followed, with the Kickhams defending well. Burns cut the gap to three when he pointed a free. In the 2nd minute Paul Kelly pointed a free to push the lead out to four points. Two minutes later, the veteran Kelly got a beautiful flick on the ball as it dropped to the square and the green flag waved.

Five or six minutes left and the gap was now seven points. It was too late for Clonmel to rally, though they attempted to do so. The Mullinahone defence which had been good all the afternoon refused to yield. Here the big men were ex-Tipp footballers Niall Curran (35) and Kyran Vaughan (39). Plenty of support came from Luke Mullally and Kevin Walzer. Yet another Clonmel Óg point from a free brought the scoring to an end, but when referee Martin Doyle blew the final whistle, it was Mullinahone C.J. Kickhams who were South Tipp Intermediate football champions for the first time since 2011 and the 6th since 1989.

Clonmel Óg will be very disappointed. They may point to the three hard games against Grangemockler, but in truth, the third one was hardly that tiring. Only two of their eight points came from play. Both teams now go forward to face West Tipp opposition, Rockwell Rovers or Cashel on this Wednesday night under lights in the county quarter finals.

After the game, the cup was presented to C.J. Kickham’s captain Paul Curran by South Board Chairman, Michael Cooney and Tony Brosnan on behalf of the sponsors Clonmel Credit Union.