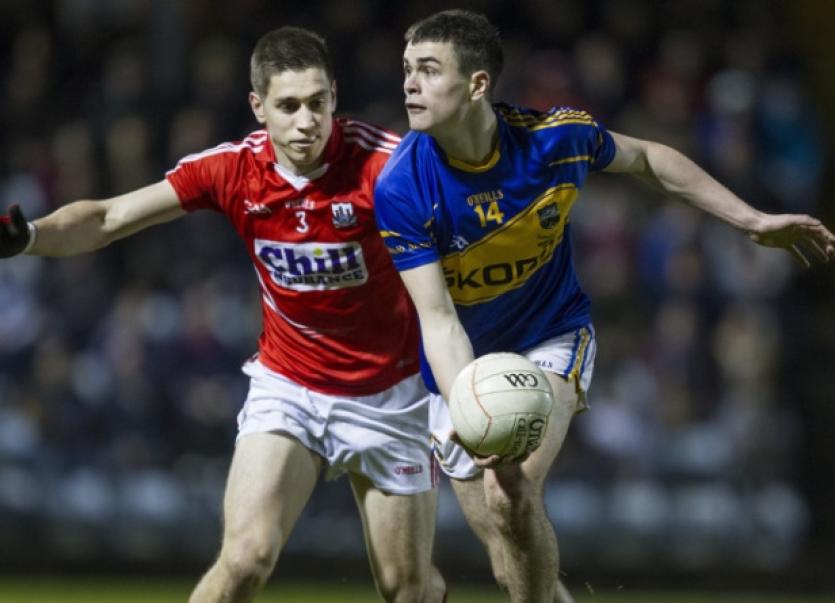 A superior Cork team proved too strong for Tipperary in the Munster under 21 football final at Páirc Uí Rinn, Cork, on Wednesday night last.

A superior Cork team proved too strong for Tipperary in the Munster under 21 football final at Páirc Uí Rinn, Cork, on Wednesday night last.

For Tipperary, appearing in their sixth final in this grade in eight years, the result, sadly, was a familiar story. Once again ‘The Rebels’ had too much firepower in every line, and the victory of 2010 over Kerry remains the county’s only Munster success.

The manner of earlier comprehensive wins over Waterford and Clare gave promise that this team might be able to buck the trend of four previous final losses to Cork. However, disappointingly on the night, too many of the Tipp side failed to produce their best against an excellent home side, and a four points winning margin somewhat flattered Tipp at the end.

The early exchanges were even and after five minutes the sides were tied at two points apiece and for the 4,164 attendance it was shaping up to be a great battle. Greg Henry opened the scoring inside two minutes but a pair of quick points from Kevin Crowley and Dan McEoin edged Cork in front before a Michael Quinlivan free, after Liam McGrath’s great run, levelled matters.

Thereafter Cork took control of the game and their physical presence around the middle of the field set them up to dominate. Killian O’Hanlon, Ian Maguire and Sean Kiely were winning most tussles to launch wave after wave of quick-ball attacks.

Eight of the next nine points went Cork’s way and by the 23rd minute they were in complete control at 0-10 to 0-3.

Man of the match Alan Cadogan at corner-forward accounted for three of Cork’s scores in this period with the others coming from Brian O’Driscoll (2), Mark Sugrue (2 frees) and Kevin Crowley.

Tipp’s only reply was a 15th minute point from Michael Quinlivan who won a high ball in midfield to start a movement he eventually finished himself with a left footed point.

But just when it seemed this provincial decider was slipping easily from Tipp, a goal in the 25th minute gave hope. Substitute Colman Kennedy with his first kick of the game finished a great move involving Sean Flynn and Colin O’Riordan past Cork goalie, Michael Martin.

The Cork response was emphatic and they had the last two points of the first half, both frees from Brian O’Driscoll and Dan McEoin, to lead 0-12 to 1-4 at the break.

One couldn’t see it coming on the first half performance, but 10 minutes after the restart Tipperary were level.

Michael Quinlivan with a free from 35 metres and John Corkery swopped early points before a passing movement involving Greg Henry and John McGrath was blasted to the net by Steven O’Brien in the 37th minute.

A fine point from Colin O’Riordan, followed by another free from Quinlivan, tied matters up at 0-13 to 2-7 and briefly Tipp had Cork worried.

But it was very brief. Cork composed themselves and three points from  McEoin (two frees) on either side of an excellent effort by Alan Cadogan put them three to the good again. That advantage was doubled in an instant when a good move was finished by Sean Kiely when blasting high to the net. At 1-16 to 2-7 with just 12 minutes to go it looked all over for Tipp.

To the credit of David Power’s side, a third goal from Greg Henry, set up by Michael Quinlivan who played a true captain’s part, kept everyone on edge. But it wasn’t to be and Cork closed it out with points from Kiely and Cadogan, before Colman Kennedy completed the scoring.

Cork were a league above what Tipp had encountered prior to the final and the physicality and skill levels, not to mention the speed of execution, proved too much for the Premier lads this time. But Tipp lost nothing in defeat and their refusal to capitulate throughout had to be admired.

Perhaps it is a testimony to the esteem that this team are held in by so many that a four points Munster final defeat to Cork in Cork is a cause of great disappointment. But with proper development there can be better days ahead.