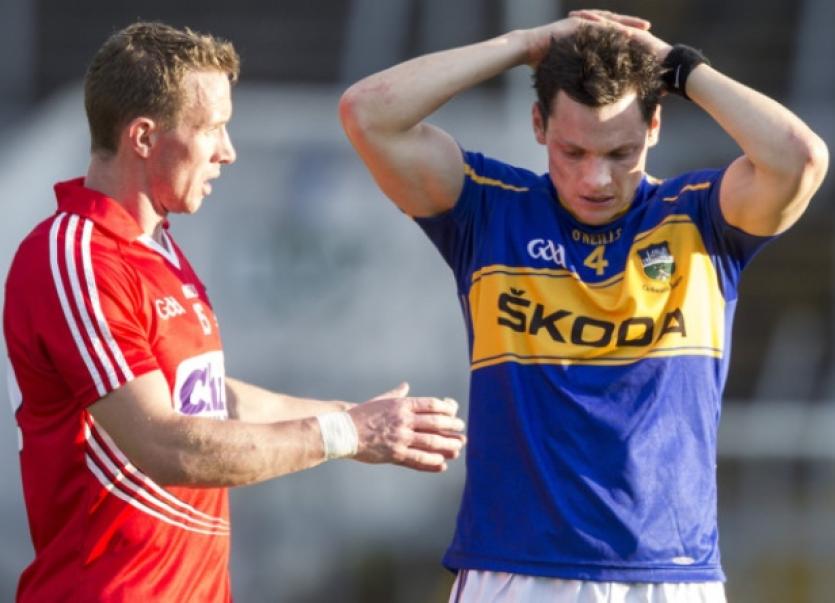 In the cold light of day when Tipperary reflect on this epic Munster senior football semi-final it will painfully be recalled as a tremendous opportunity lost.

In the cold light of day when Tipperary reflect on this epic Munster senior football semi-final it will painfully be recalled as a tremendous opportunity lost.

Having stated that much, let there be no doubt, this was an absolutely magnificent performance by the county’s footballers who for the most part of the game had the greatest Gaelic football shock in a decade in their grasp. Alas it wasn’t to be.

That Tipperary finally wilted late in the basking sun at Páirc Uí Chaoimh to Cork was heartbreakingly disappointing to all concerned. But to their credit this was a super-human performance against one of the top teams in the country. Tipperary football under Peter Creedon’s tenure is definitely on the up.

Ranked as no hopers by the bookmakers and many so-called knowledgeable football experts prior to the game, Tipp tore up the script. Playing a Division 1 team, ranked 20 or so places above them, Tipperary produced a top class peformance that silenced many critics, at home and further afield. In so doing, this Herculean effort won tremendous praise and admiration for Tipperary at the end of an absorbing contest.

There were two crucial aspects in determining the final result at the conclusion of a pulsating game - a battle in which Cork only drew level in the 70th minute.

From a Tipp point of view, the wide count was mortally wounding; five in the first half and nine in the second half when Tipp had ‘The Rebels’ in trouble. Had a fraction of these chances been converted it would have broken that fruitless spell for Tipperary going back to 1944 in championship fare against Cork

The second major factor was the strength in depth of the Cork bench. Tipp forced the replacement of both Cork midfielders and three of their highly-rated forward line. Indeed they curtailed the starting inside line of Goulding, Hurley and Hayes to just a single point from play. Cork, however, were able to replenish with six top class subs, including the game-changer in dual-star Aidan Walsh and the likes of Eoin Cadogan and Colm O’Neill. No doubt about it, Cork had to send for the cavalry to get them over the line on Saturday last.

Before a disappointing attendance of just 4,192, Cork had the opening score in to the Blackrock end when  Daniel Goulding pointed a free after only 75 seconds.

Tipp were back on terms in the fourth minute. A nice passing movement created a goal chance for Conor Sweeney but the Cork keeper blocked the effort and when the ball broke Peter Acheson tidied up with Tipp’s opening point.

Tipperary were settling in well at this stage and took the lead in the seventh minute when Conor Sweeney tapped over his first of three frees.

Significantly Tipp were up to the pace of Cork and the backline, especially Ciarán McDonald on Brian Hurley, were standing up well.

Almost immediately Barry O’Driscoll, the only Cork half-forward to survive the 70 minutes, levelled with a nice point.

Tipp enjoyed a mini purple patch over the next few minutes to push three clear by the 11th minute at 0-5 to 0-2 and give themselves real belief in a sensational upset.

Firstly the once-again outstanding Colin O’Riordan went on a great run culminating in a Michael Quinlivan point, before landing a great score himself. And when Quinlivan was fouled going through Barry Grogan tapped over the free and Tipp suddenly had a bit of breathing space.

Cork rose to the challenge though and the next five scores all went their way.

Brian Hurley’s free, followed by a well worked point by Paul Kerrigan reduced the margin to a single point on 15 minutes. A pair of Daniel Goulding frees, as the Tipp backline came under increasing pressure, edged the Leesiders ahead before John Hayes at corner-forward made it 0-7 to 0-5 with the only point from play that the Cork inside line scored all day.

Tipp arrested a scoreless 17 minute spell with a superb long-range point from Steven O’Brien after good work by Peter Acheson. And when Brian Fox was fouled on a run through Barry Grogan restored parity at 0-7 apiece on 28 minutes.

It was now developing in to a battle and once more ‘The Rebels’ edged in front with a Michael Collins point from the right wing. Next a Tipperary attacking movement broke down deep inside the Cork half and a quick counter movement saw midfielder Fintan Goold put them two clear.

A even bigger Cork cheer came with the pre-interval introduction of Aidan Walsh to replace midfielder Andrew O’Sullivan. The home supporters appreciated the significance of the move and ultimately it would be telling. But with Steven O’Brien and George Hannigan winning the midfield battle it was necessary for Cork manager Cuthbert to react.

The next passage of play was hugely significant. Cork put a flowing movement together and a goal looked on which Peter Acheson denied with a goalline block. The ball went upfield and Steven O’Brien found Conor Sweeney with a superb pass and the Ballyporeen man neatly tucked home a goal. It was the last score of the first half and gave Tipp a 1-7 to 0-9 advantage.

A minute in to the second half Sweeney put over a free after O’Brien was fouled but it would take Cork all of seven minutes to reply with Michael Collins raising a white flag.

A brace of quick points for Tipp from Sweeney, one a free after O’Riordan was fouled, and the second from play after great work by George Hannigan, put Tipp three clear after 47 minutes.

Cork sub Colm O’Neill with a pair of frees had it back to 1-10 to 0-12 on 62 minutes as an heroic Tipp fought hard to hold on. Cork subs would kick five points in the second half.

Brian Mulvihill was coming more in to the game as it developed and a nice point put Tipp two clear with just four minutes remaining, but it would be Tipp’s last score.

Cometh the hour, cometh the man. Aidan Walsh then put in a cameo performance and three points from play, two off his right, one off his left, edged Cork ahead for the first time on 71 minutes. With almost the last kick of the game, Barry O’Driscoll completed the scoring at 0-16 to 1-11.